Summer basketball is here and the Phoenix Suns hope to roll out a team that is more competitive than their regular season squad. Their first stepping stone on the way to their summer league championship is a very talented Portland team.

Watch: The game is being shown on tape delay on NBA TV at 10:30 PM (local time). DVR is always an option. If you don't have access to NBA TV or would rather watch it live, the entire summer league slate can streamed online via a $14.99 subscription on NBA.com. 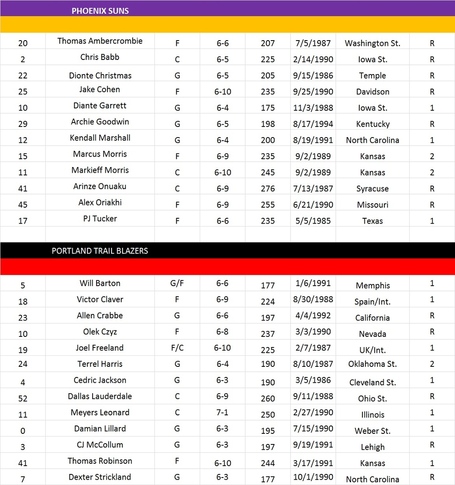 What to watch for:

Not Alex Len. He's recovering from his second surgery in less than three months to treat stress fractures in both of his ankles. It's really a shame because it would have been nice to see him match up against the Blazers talented young center, Meyers Leonard.

Archie Goodwin. This guy's going to be around for a minute and this might be one of the best chances to get a sneak peek. He likely won't see a ton of playing time during the regular season being such a raw young talent. Interestingly, if Archie is back in Vegas for his last summer league two years from now he still won't be old enough to buy a beer.

Robinson vs. the Morri in a battle of underperforming power forwards from Kansas. Marshall vs. Strickland in a clash for powder blue supremacy.

C.J. McCollum starts his quest to stultify the nine teams that passed him over in last year's draft.

This will be new head coach Jeff Hornacek's first time acting in that capacity. It's summer league, but it's still good experience for a novice coach with a new team.

Remember everyone. This year counts!

This will be the first year that a "champion" of the summer league is crowned.

Teams will play three games between July 12-16 and be seeded based on those results to compete in a single elimination tournament.

The point system is as follows:

3 points for a win

1 point for winning a quarter

.5 points for tying a quarter

Tiebreakers will be head-to-head record, overall point differential and (as a last result, awesomely) a coin flip.

Obviously this is mostly about getting eyes on new prospects and letting the coaches and players feel each other out, but winning is fun too.