It's not at all clear who likes this new tournament format at the NBA Las Vegas Summer League, but the undefeated Phoenix Suns (3-0) received a high seeding and will now try to "win it all". Or not.

The Suns have their first three-game winning streak since late February and are three-games over .500 for the first time since...a long, long time. This fact was not lost on Kendall Marshall who walked through the tight hall outside the Suns locker room at the Thomas & Mack Center giving fist bumps to anyone with a hand and proclaiming his joy at the greatest team success he's seen as a professional basketball player which came in large part to the impressive stylings for 18-year-old Archie Goodwin. Sweet irony.

As a result of this unprecedented glory (it sure feels unprecedented), the Suns hold the third seed heading into the inaugural Summer League tournament. They are behind only Golden State (#1) and Chicago (#2).

Here's how the league explains this whole shebang.

Teams seeded 11-22 will compete on Wednesday, with the winners of those contests advancing in the tournament to play Thursday against teams seeded 1-10, who earned a first-round "bye." Teams on losing Wednesday and Thursday will play on Friday. The single elimination tournament resumes on Saturday with a champion being crowned on July 22.

Seeding for the tournament was determined by won-loss records. Ties were broken using quarter-points and then point differential to determine the seedings.

With a "bye" on Wednesday, the Suns await the winner of the Atlanta/Portland game and play Thursday at 5pm.

If the Suns lose that game, they play their final match on Friday at 7:30pm.

If the Suns win on Thursday, they next play on Saturday at 3pm.

If they win on Saturday, they would play their sixth summer league game on Sunday at 3pm and if they win that, the championship game is Monday at 6pm.

My guess is that there's not going to be a lot of teams, other than the mighty D-league Selects who are playing harder than anyone else out here, who really want to play a sixth and seventh game on Sunday and Monday. Those Saturday matchups could turn into EPIC TANK FESTS. 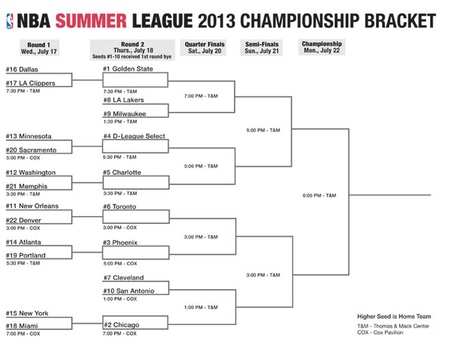