In an interview with Zach Lowe of Grantland.com this week, Jeff Hornacek impressed the masses by talking intelligently about the importance of high-value shots in an offense. But by inheriting a Phoenix Suns roster loaded with low-value shooters, he has a lot of work to do.

Share All sharing options for: Phoenix Suns coach Jeff Hornacek has a lot of work to do if eFG% is important to him

Last year's Phoenix Suns were very difficult to watch, so much so that the Summer Suns are a breath of fresh air by comparison. But the dirty work has only just begun: talking players out of taking their "comfort" shots because they are a low percentage, low-value shot.

"We gotta get rid of that long 2," Hornacek told Lowe for Grantland.com in an in-depth interview. "I'm not opposed to the middle jumper, in that 15- or 16-foot range. I think all but two teams that were in the playoffs, their effective field goal percentages were above 51 percent."

Well, he was pretty close.

In fact, 11 of 16 playoff teams began the playoffs with an Effective Field Goal % above 50% (and only four of those maintained that pace in the playoffs themselves). The Phoenix Suns were 22nd in the league at 47.7% (only slightly worse under Hunter than Gentry).

Effective Field Goal % gives extra credit for 3-pointers, something the Suns were terrible at shooting last season. If the Suns had been an average 3-point shooting team, their eFG% would have been middle of the pack as well.

The Suns took a ton of mid-range jumpers, the least valuable shot in the NBA.

The easiest and highest percentage shot is the very short two-pointer, a dunk or layup in the restricted area. But every team knows that and designs their defense to prevent opposing players from getting too many of those shots.

The Suns were middle of the pack in attempts inside the restricted area (the semi-circle under the basket) and 10th in shooting percentage (61.6%). That was the good news. And the only good news.

The next best shot on the court, in terms of value, is the 3-point shot. Generally, that's a 23+ foot shot except in the corners where it's a 2 feet shorter. Because these are worth 3 points, it's acceptable to make only 40% of them since that translates to a 50% higher effective field goal percentage.

The Suns were terrible in this regard last season. On the shorter corner 3s, the Suns were 16th in attempts but only 20th in FG% (36.8%). The league leaders, Golden State, made 45.8% of their corner threes.

These stats highlight a couple of important things that must be handled independently by the new coaching staff.

First, the Suns were terrible at MAKING threes, which can be improved with new players and/or a lot of practice.

Second, the Suns were terrible at TAKING threes. The Suns were in the bottom third of the league in attempts and only in the middle of the pack in shots in the restricted area. This means they lived and died by the mid-range jumper, the worst shot on the court.

The further away from the basket a player is, the lower the chances of making the shot. So, good teams take as few of these kinds of shots as possible unless it's far enough out to be worth three points.

"The ones we have to eliminate are the ones that are within 4 or 5 feet of the 3-point line," Hornacek said smartly to Lowe.

This is where the Suns died last year.

The 2012-13 Phoenix Suns took the SECOND MOST MID-RANGE SHOTS IN THE ENTIRE LEAGUE. Ugh. Only the Philadelphia 76ers took more mid-range shots than the Suns 2,341 attempts.

To make matters worse, the Suns weren't even good at making them. They finished only 16th in the league in FG% on mid-range shots.

If Hornacek wants to get rid of mid-range shots, or at least the ones closest to the three-point line, he's got a lot of coaching to do.

"The one thing I really like to show players," Hornacek continued. "Which I don't think a lot of them actually look at, is just simple shot charts. Where do they shoot the ball well from? And where don't they?

"You'd be surprised how many times I ask a player, "If I make a play for you to shoot from the free throw line, that's a great shot for you, right?" And the guy will say, "Oh, yeah, absolutely." And then I'll pull out the sheet and show him he only shot 34 percent last year from that spot. I don't think they understand where they shoot well from."

Michael Beasley, Marcus Morris, Markieff Morris all make much of their living on the mid-range, least valuable shot on the court.

If you look at his heat chart (courtesy of basketball-reference.com) you can see that his most effective spots - gasp! - were at the rim and on the corner 3. 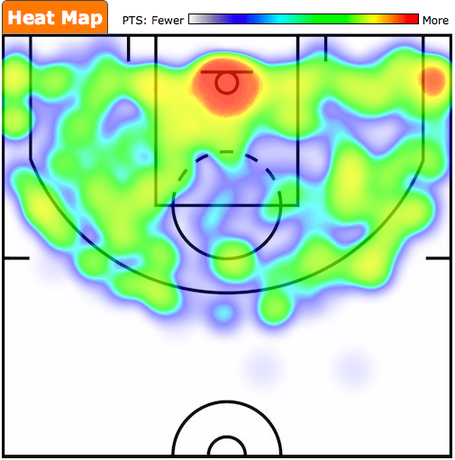 Yet, Beasley prefers the mid-range shots in games. Go figure.

Markieff Morris's shot chart is quite similar. His highest volume of shots was at the basket, thankfully, but a close second was the mid-range shot. 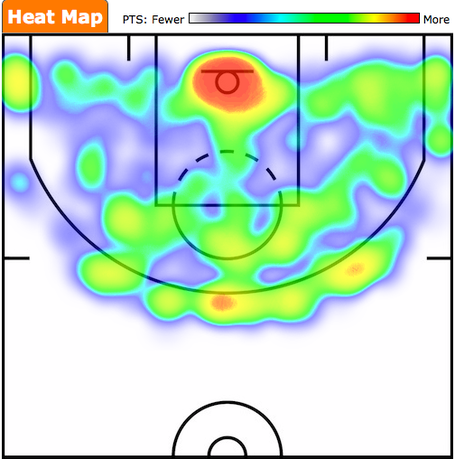 Again, in terms of actual points scored, Markieff was most effective at the three-point line and at point-blank range. Yet, he still found a way to shoot a bunch of midrange jumpers. Some of that is the offense, but a lot of it is comfort level. Hornacek needs to work with these guys on their shot selection.

Marcus Morris, the twin from Houston, is a very interesting case. Look at his shot distribution in 2012-13. 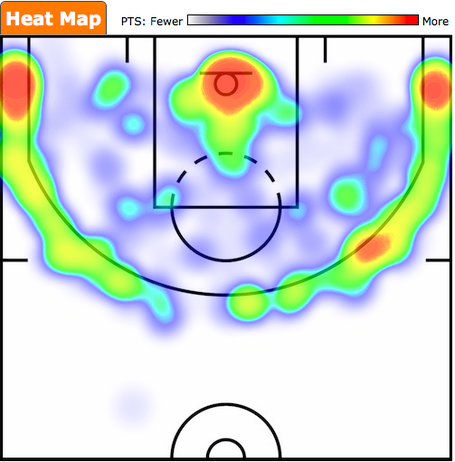 This looks like a great distribution of shots and points. Over the course of the year, Marcus took most of his shots from the 3-point line or the basket area.

Yet, breaking it down before/after the All-Star break (ie. his trade to Phoenix) is quite interesting. In the Suns helter-skelter offense, Morris went from being a high-efficiency shooter to a low-efficiency shooter. I couldn't find the heat charts that would split Morris between Houston and Phoenix, but I did find this. 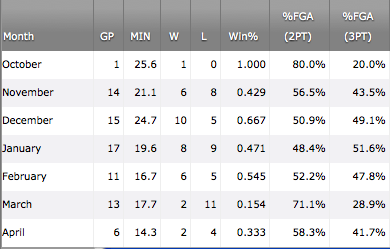 In Houston, where he played 20 minutes per game for one of the highest-efficiency teams in the league, Morris was quite effective. Nearly half of his shots were 3-pointers, where he made nearly 39% of them.

But look at March, his only "full" month in Phoenix. Less than 30% of Morris' shots were 3-pointers. Not surprisingly, his success rate plummeted and he was suddenly just another player who can't take good shots.

And while his summer league has been good in Vegas, you'll notice that he and his brother are taking a lot of mid-range shots. Mook's game winner, in fact, was a step-in long-two ad happened to find the bottom of the net.

Hornacek has a lot of coaching to do.