Where does "2013 Summer League Champions" fall on the checklist during the rebuilding phase? Where exactly?

More than likely that is not on Ryan McDonough, Lon Babby, or Robert Sarver's actual plan of attack as the Phoenix Suns (3-0) look to parlay an undefeated Summer League to date into a win in the "playoffs." So far the Suns have been impressive, well as impressive as a Summer League team can be.

Here is the Summer League Bracket for future reference.

Through three games the team has knocked off the Portland Trail Blazers, Minnesota Timberwolves, and the Memphis Grizzlies leaving bodies in their wake as the firing squad rolls into a round one re-match with the Trail Blazers.

It has been an interesting experiment with the Suns sending down four active roster members, all of which played at least 14+ minutes a game last year and even started portions of the season. This group is tenured, experienced, and should have tan advantage against rosters comprised of rookies, D-League hopefuls, and P.J. Tucker types looking for an opportunity. Having all of them along with first round pick Archie Goodwin that makes up 41.6% of next years potential rotation.

Last time out the Blazers were in firm control early behind the great play and scoring of rookie C.J. McCollum. He torched the team early for 14 points on efficient shooting before the Suns adjusted with strategic double-teams.

So far in Summer League the Blazers (1-3) have struggled to score the ball in general with 68.5 points per game, which is more alarming when you subtract the 20.0 PPG coming from McCollum. Through these four games McCollum has not shot the ball well (37.3%), but has been aggressive.

If the Suns win, up next will be either the Toronto Raptors or the Denver Nuggets in round three of the Summer League Playoffs. This would be the first playoff win for the Suns since may 25th, 2010 and would also be the longest winning streak by the team in 29 months.

Oh, by the way I got into McDonough's office and took a picture of the Suns Secret Plan: 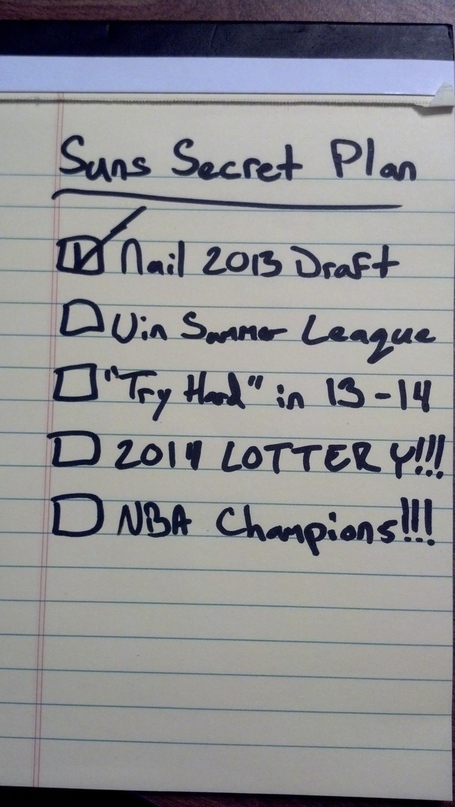