The third-seeded Summer Suns face the sixth-seeded Summer Raptors in a potential preview of what could happen with Len and Goodwin, given time.

The Suns face the Raptors at 3pm AZ Time on NBATV in a fight to make the Final Four, or semifinals, of the inaugural Vegas SL Championship.

While watching the game, you can get a whiff of what we might eventually see in Alex Len and Archie Goodwin.

In a recent article, our resident scout Kris Habbas and a former scout for the Phoenix Suns, Amin Elhassan - both of whom have scouted college and international prospects for the last several years professionally - rated Suns draftee Alex Len on nearly the same plane as Raptors youngster Jonas Valanciunas.

The comparisons were done on a "when they were drafted" basis. Jonas, drafted 5th overall in 2011, was a skinny 19 year old kid from Europe with a range of skills and talent who just wasn't ready to play in the NBA yet. The Raptors were willing to wait. A year later, he came over to the NBA and began to make his mark in the rotation. Now at age 21, he's wowing the scouts and journos at Summer League with a near 20-10 stat line.

When you watch Valanciunas today, you might see someone that Suns rookie C Alex Len could someday compare to. Or, if Len doesn't pan out at all, you might see what could have been. Their games are not completely similar, but their body types and potential are right there.

This quality Raptors team also boasts last year's #8 overall pick, Terrence Ross, who was coveted by Suns fans as a shooting guard prospect. A year later, the Suns have the young Archie Goodwin in that spot. Today, you can use your own eyes to compare the two prospects.

Ross, a 3-and-D guy, was taken a lot higher in a better draft than Goodwin and is a lot more polished as an NBA player. So, expect to be impressed by Ross. He is averaging 13.5 points, 5 rebounds and 1.8 steals per game in the SL.

Yet Goodwin, only 18, has been impressive if not consistent. He is putting up 11.8 points per game, with 3 rebounds and a .3 assists.

It will be fun to see them battle it out today.

While Jonas V and Ross are the headliners for the Raptors, the Suns boast three rotation players from last year's "worst in the West" team: Markieff and Marcus Morris, and P.J. Tucker. Plus, they play last year's lotto pick Kendall Marshall at PG.

Let's see if the Raptors can hang with the Suns balanced and deep squad. 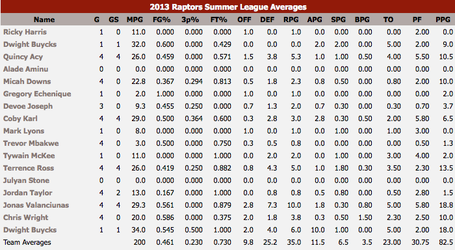