The Phoenix Suns have the upper hand in keeping newly acquired Eric Bledsoe, so they don't have to jump the gun and overpay him. Under the new CBA, the "home team" always keeps the guys on rookie deals that they want to keep.

With reports that the #1 overall pick, John Wall, is about to agree to a maximum extension of $80 million over five years, the contracts will start to flow between now and October 31 for the deserving of the 2010 Draft Class. The 2010 Draft was nothing like the 2003 Draft, for example, but there are some very good players up for extensions.

One of those players is the Phoenix Suns recently acquired combo guard Eric Bledsoe, taken 18th overall in the 2010 Draft. From July 1 to October 31, Bledsoe and all the other 2010 Draftees are eligible for extensions that tack onto the end of their rookie contracts in time for the 2014-15 season (one year from now).

How will those extensions play out?

Let's look at the first (and only) two offseasons after the signing of the current CBA in December 2011.

The 2008 #1 overall pick, Derrick Rose, and 2009 #1 overall pick, Blake Griffin, received super-maximum 5-year extensions without hesitation. Since Rose and Griffin had made All-Star and All-NBA teams by then, they were eligible for super-max deals worth more than $95 million over five years.

The "normal" max rookie-contract extension a team can offer its own player is $80 million over 5 years. But under the new CBA only one player on your team can have a 5-year rookie extension at a time. So James Harden couldn't get more than 4 years from OKC when his turn came up in the 2012 off season. With two players (Westbrook and Druant, who was signed under the prior CBA) already making max money, OKC couldn't justify maxing out Harden or Ibaka, or both, considering the need to have a full roster to compete for a championship.

So both were only eligible for 4 years, though they could still make the same annual salary (starting at $13.8 million). OKC extended Ibaka at less than max, and traded Harden to Houston. Houston happily obliged Harden, giving him his $80 million over 5 years as fast as they could shove a pen in his hand. 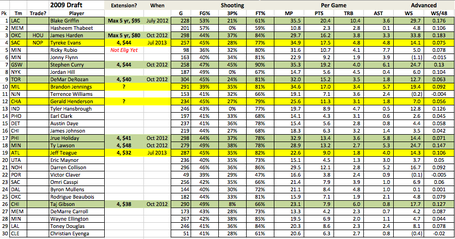 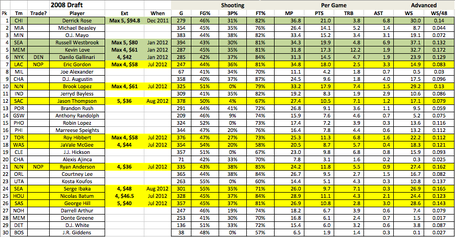 The Los Angeles Clippers, Oklahoma City Thunder, Houston Rockets and Chicago Bulls are the only four teams who have already committed their one "5 year rookie-contract extension" to a player on their roster, despite there being more players deserving of that money.

The Minnesota Timberwolves concluded a contentious negotiation with Kevin Love by giving him 4 years. In response, he required an opt-out clause after three. But to this day, Love has some bitterness toward the Wolves for not giving him the 5-year extension.

The Brooklyn Nets held out on Brook Lopez while they tried to acquire Dwight Howard, and eventually signed Lopez to the most money anyone else could offer him: 4 years, $58 million. That move proved to be commonplace over the last two offseasons - since other teams can't offer more than 4 years, why outbid yourself?

Two players over those two eligible Draft classes were signed to maximum offer sheets by other teams to try to steal them away: $58 million over 4 years. Eric Gordon was wooed by Phoenix, Portland wooed Roy Hibbert. Both were matched, with the incumbent team thanking the Suns and Blazers for setting the contract parameters.

That's eight maximum extensions (in terms of salary, anyway) given out over the last two eligible Draft classes. Six were given to the 2008 draft class, and only two to the 2009 draft class.

Fourteen other players from those two classes got rookie-deal extensions for something less than max. Of those fourteen, all but one (Taj Gibson) were regular starters for most of their first four seasons in the league.

Some of them were preemptive (designated in GREEN in the chart above), signed before their fourth season began to lock them up on their team for another four years. From the 2008 Draft, only Danilo Gallinari accepted an offer less than max before his fourth season started. From the 2009 Draft, that number swelled to five who took less than max before playing their fourth season: four guards (Stephen Curry, DeMar Derozan, Jrue Holiday, Ty Lawson) and one big man (Gibson).

But the other nine did not take less than max until they had become Restricted Free Agents, after their fourth season in the league (indicated in YELLOW in the charts above). As Greg Monroe's agent, David Falk, puts it: why give up anything before you have to? He is already counseling his client to wait out the fourth season before doing anything.

Still likely to get some kind of extension this summer are Brandon Jennings and Gerald Henderson. Both are good young players who likely are asking for more money than anyone is willing to give. Since no restricted free agents have been pilfered under the new CBA (except for those noted in the next section, which doesn't apply to these two), it looks like no NBA team wants to do the negotiating and set the price for Henderson and Jennings just to lose out on them.

Players drafted in the second round and those who had been signed off the street in the past year who had partial Bird Rights can be signed to an RFA offer with a balloon payment in the third year. If matched, the matching team agrees to pay an enormous sum in year three of the contract which counts against their salary cap and luxury tax bill. If not matched, the new team just pays (and counts against their cap) the average annual value each year.

Houston stole Jeremy Lin from the Knicks and Omer Asik from the Bulls, both teams who were already in the luxury tax, for twin three-year, $25 million deals. For the Knicks and Bulls, the contract was $5 mil, $5 mil, $15 mil over three seasons. For Houston, it would be $8.3 million per year.

The risk to the signing team (Houston) is that they are now paying more than $8 million per year to guys who were barely worth the league minimum to their team last season. In fact, Houston was one of two teams that had released Lin in the past season.

I don't see anyone worthy of this kind of crazy contract this summer.

This summer's eligibles, including Bledsoe

The 2010 Draft Class is now up for extensions. Word is that the #1 overall pick, John Wall, is about to get his max extension of $80 million over 5 years. This is the most Washington is allowed to offer, since Wall has not made any All-Star or All-NBA teams. Yet, he is blossoming at this point and belongs in that class of player. 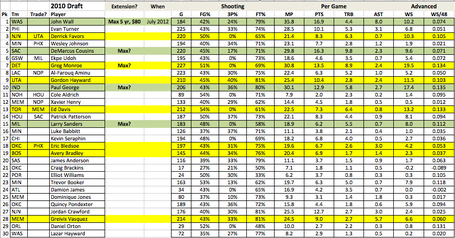 While George, an All-Star in 2012, is likely to get that max extension, the other three are not such a sure thing. None has made All-Star team or received any league-wide honors as has been the case for all the prior max extension guys. Expect them to hold out for max, and for their teams to try to let the 2014 free agent market set the price unless they just want to capitulate. All will likely be out there next summer for RFA offers, and all will most certainly be matched.

No player in the prior two summers has been allowed to take an RFA offer and walk, even if the team was ready to see them go. Three were matched, and two were turned into sign-and-trades. Tyreke Evans and Ryan Anderson were signed and traded as restricted free agents the last two summers, both to New Orleans.

Clearly, Eric Bledsoe was a coveted trade target who has been kept out of the starting lineup by a future Hall of Fame point guard Chris Paul in Los Angeles.

Yet, there is only one real comp for Bledsoe under the new CBA as a bench guy who gets an extension before his fourth year: Chicago Bulls forward Taj Gibson. Last fall, the Bulls recognized how important Gibson was to their team despite having him come off the bench, and they rewarded him with a 4 year, $38 million extension so they wouldn't have to match a bigger offer this summer.

Another close-ish comp could be Kings forward Jason Thompson, who never did become a full-time starter for the Kings before his rookie deal expired. Thompson entered free agency as an RFA, never got a big offer and eventually re-signed with the Kings for $36 million over 5 years using their Bird Rights (not a rookie extension, so they still have their "5 year" available for Cousins).

But the best overall comparison could be the Pacers' PG George Hill. Hill was a backup like Bledsoe for his first three years in the league and then was traded for Kawhi Leonard to Indiana. At Indiana, Hill entered a situation that already boasted a starting back court. Hill played a lot of minutes and eventually won the starting spot. That next summer, after his fourth season was done, Hill re-signed as a free agent for $40 million over 5 years using his Bird Rights.

These cases are interesting ones to consider when it comes to Eric Bledsoe. The Bulls tried to save money by signing Gibson before his fourth season, but comparable situations for Thompson and Hill ended up better for their teams for having waited out the FA process. Thompson and Hill both signed for less "average annual value" than Gibson, and for one more year of control by the "home" team.

Another good sign for the Suns' ability to keep Bledsoe - not one restricted free agent has left his team without the team wanting him to leave (Anderson, Evans) and only one has resulted in any modicum of bad blood (Love).