What's the Next Move for the Phoenix Suns?

Now that the dust has settled from the latest trade, a quick glance at the Suns current roster still shows a work in progress. What will be the next move the Suns make? Here's a look at some of the possibilities that could come to fruition.

Share All sharing options for: What's the Next Move for the Phoenix Suns?

In golden boy GM Ryan McDonough's first month with the Phoenix Suns, he has already pulled off three very well received trades (including trading up one spot in the NBA draft).

But he's not done yet.

Looking at the Suns roster, they currently have 16 players under contract for next season; not counting last year's third string point guard Diante Garrett or second round draft pick Alex Oriakhi...neither of whom are on guaranteed deals.

Here's a look at the updated roster below: 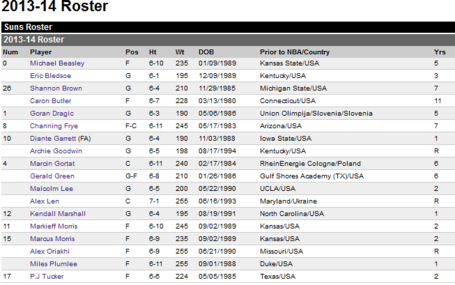 In case you were wondering, the maximum number of players that a team can carry on the roster at the start of the season is 15. So it's a certainty that at least three of the players (one under contract) that you see above will be gone before the deadline to submit final rosters at the end of October.

But what are the most likely scenarios? Here is a look at some of the more popular options in no particular order:

Malcolm Lee was basically the cost of the Suns moving up from the 30th pick to the 29th pick in the draft in order to draft Archie Goodwin. Lee was originally the 43rd pick in the 2011 Draft who signed a three-year contract with the Timberwolves before becoming plagued by injuries that significantly limited his playing time over the past two seasons. His guaranteed salary is only $854K, so the Suns could easily waive him prior to the start of the season. This is certainly the easiest option for the Suns which would require no further trades at this point.

The rumor about the Suns' interest in trading Marshall has been floated around since the Suns' new staff arrived, but gained momentum during Summer League when a supposed "source" leaked the information that the Suns were actively shopping him. Marshall was part of the decisions made by the old regime, and his future with the Suns is now very much in question with McDonough taking over for Lance Blanks. Still, would the Suns be able to trade Marshall for a first round pick without taking any players back in return? If the Suns do in fact trade Kendall, the more likely scenario in my opinion would be to include him in a larger trade...perhaps like the one below.

This trade has to happen at some point soon. The Suns are a rebuilding team looking to acquire youth and draft picks, and while Gortat is without question one of the best players on the team, it doesn't make sense for Phoenix to keep the 29 year old center after his contract expires at the end of this season. With both Jared Dudley and Luis Scola already gone, it's only a matter of time before Marcin is dealt as well. But will it be before the start of the season? The Suns may choose to hold onto Gortat until closer to the trade deadline for a couple of reasons. First, his value will likely increase by that time as potential playoff teams become more desperate to shore up their rosters before the postseason. Also, the Suns could choose to hold onto him for the time being to mentor Alex Len, and as a bit of security in case Channing Frye doesn't actually return. Again, it's only a matter of time before the Suns trade Gortat, but I'm not so sure it's the next move the Suns will make.

Of course this is the dream scenario for a lot of Suns' fans...but is it likely? First, one has to realize that nobody, and I mean nobody, is looking to acquire Beasley. The Suns would love to free up his $6 million per year contract that doesn't expire until the end of the 2015-16 season, but it would cost them in order to do so. The Suns could attach Beasley to another deal, but all that will do is stifle the assets Phoenix would get in return. The other option is to basically pay another team to take him on by giving up one of our first round draft picks next year. Again, is it really worth it? The Suns aren't to the point of desperation in order to get under the cap, so I don't see this as being very likely at all.

The other option the Suns have with Beasley is to use the stretch provision on him. The current NBA CBA allows teams to waive a player and stretch their remaining salary over twice the years the player is under contract, plus one year. In Beasley's case, he is under contract for two more seasons with approximately $12.25 million guaranteed in all. If the Suns waived Beasley now, they could stretch his salary and his cap hit over the next five years at only $2.45 per season. This would minimize the effect of cutting him on the salary cap, especially in later seasons as the salary cap continues to rise. The only downside of course is the dead salary the Suns would have on the books for five years instead of just two. Still, if the Suns plan on ridding themselves of Beasley, I see this as the most likely scenario.

Of course, these are only some of the more likely trades or moves the Suns could make before now and the start of the season. There are any number of other possibilities with Phoenix's current roster that could still happen as well. The Suns are loaded with relatively cheap and/or expiring contracts that they could put together to make another big move if the opportunity presented itself.

Not only that, but the Suns could make more than one move between now and the start of the season. For instance, it's entirely possible that they choose to waive Lee, stretch Beasley, and also make an additional trade in order to free up an additional roster spot or two...anything's possible.

It's also worth mentioning that the Suns still have plenty of time to make their decision. They can invite up to 20 players to participate in training camp before making their decision and finalizing their roster, so there's no need to move hastily at this point.

My guess is that another trade could happen at any time; McDonough has proven he is aggressively pursuing assets and is looking to make major changes. However, I don't believe the Suns will waive anyone until they have a chance to take a look at everyone and make an informed decision about what's best for the team.