During his time in Phoenix, Jared Dudley has been a part of some great Suns memories. Let's take a look at his journey from an unknown to a fan favorite.

On July 2nd, news leaked out that the Phoenix Suns had agreed to trade Jared Dudley and a 2014 second round pick to Los Angeles for Eric Bledsoe and Caron Butler. Although the trade won't be official until the moratorium ends on July 10th, Dudley is effectively no longer a Phoenix Sun. While it's easy to get lost in the excitement and frenzy surrounding the team's acquisition of Eric Bledsoe, it is important to recognize the memorable career Dudley had in Phoenix.

The Arrival of Jared the "Junkyard Dog" 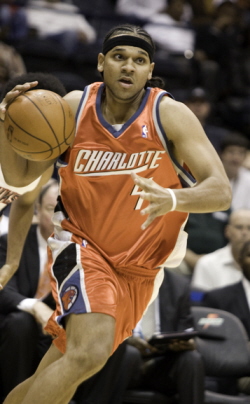 Jared Dudley became a Phoenix Sun on December 18, 2008 when he and Jason Richardson were traded from the Charlotte Bobcats for Raja Bell, Boris Diaw, and Sean Singletary. If a Suns fan said that day that Jared would become an integral player in the Suns' future, most would have scoffed at such a notion. Considered by many to be a "throw-in" in a deal for Richardson, Dudley would use the next few years to cement his spot on the Suns team and his reputation as a lovable fan favorite.

Dudley's Suns career began under the tutelage of Coach Terry Porter, who left Dudley on the end of bench. It wasn't until Porter was replaced by Alvin Gentry that Dudley's role began to increase. Jared started to show the grit and hustle that would become a staple of his game and began to endear himself to fans. Although he only averaged 5.5 points, 3 rebs, and 0.8 asts per game during the 2008-09 season, Dudley showed improvement throughout the season and was about to become a pivotal role player for the Suns going forward.

Losing the Cornrows, Winning over the Fans 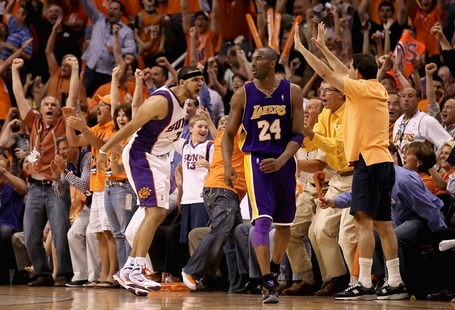 The Suns' 2009-10 campaign saw the emergence of Jared Dudley as an integral part of the Suns' rotation. He became a significant factor in the success of the team's "bench mob" and his drive and hustle next to the likes of Dragic, Barbosa, Frye, and Amundson proved to be very effective. Moreover, Dudley came into the season with a much-improved three-point shot and became one of the best shooters on a team that was historically efficient from the three point line. 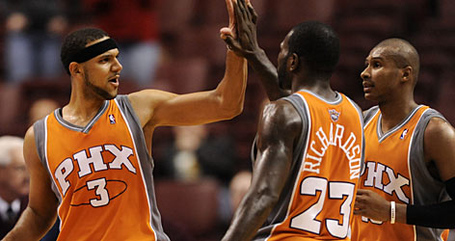 Jared Dudley is very dedicated NBA athlete - dedicated not just to his team's success and the role he plays in it, but also to improving as a player and perfecting his craft. His drive and determination was seen when he worked all through the 2010 offseason to not only lose weight and become quicker and more agile, but to also expand his offensive arsenal. He worked on his ball-handling and pull-up jumper to the extent that he is now a capable dribbler and a versatile offensive player.

Jared's dedication is also seen in his loyalty to the Suns. Even during losing seasons, Dudley had maintained that he enjoyed his role and preferred to remain in Phoenix as the team works its way back towards relevancy. He never complained about his role, even when he was demoted back to the bench in the last season, and maintained a positive attitude throughout his entire Suns career. Regardless of the team's success or failure, his character shined through time and time again.

One of Jared's traits that most endears him to fans is his likable personality. He is eloquent, upbeat, humble (often joking about his relative lack of athleticism), and never turns down an opportunity to reach out to fans. Not only is he one of the most active NBA players on Twitter, but fans love his "JMZ" videos that provide a glimpse inside the Suns' locker room.

Jared's JMZ video after a win against the Rockets early in the 2009-10 season: 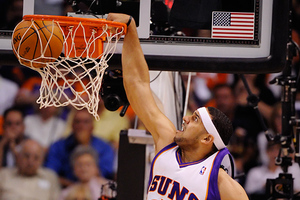 With his departure, another integral part of the yesteryear Suns (read: the 2009-10 WCF team) has left the franchise. Jared was never a prolific scorer, nor was he a high-flying athlete. In fact, almost no part of his game is flashy or highlight-worthy. However, he is a very intelligent team player that does the little things every successful team needs. He is the epitome of a "glue guy" and is a phenomenal presence in the locker room. His teammates love playing with him and his fans adore his smart play and endearing personality. The Clippers are fortunate to get such a great character and teammate and will no doubt enjoy what he brings to them on and off the court.

Although he entered the league as a Bobcat and will now be a Clipper, Jared Dudley became the player he is today as a Phoenix Sun. His transformation from a pudgy tweener forward to a smart, efficient, and passionate swingman has been very remarkable. A perennial fan favorite, Jared will be remembered for doing things that don't often appear on the stats sheet.

The trade that sends him to LA is one that benefits all parties involved. While the Suns get a coveted young piece to continue their rebuilding efforts with, Jared goes to a squad where he not only has the opportunity to compete for a starting spot on a legitimate contender, but one that allows him to be near his hometown of San Diego. Though I am sad to see Jared leave, I wish nothing but the absolute best for his career as a Clipper and hope that one day, he will be able to return to Phoenix when we are once again competing for a title.

So goodbye and good luck, Jared! You personify the strong standards and values the Suns stand for and it's been an absolute pleasure to watch you grow as a player and become who you are today. Thank you for your five great years as Phoenix Sun. Make sure you throw down some of your signature monster dunks in lob city!

Oh, and I think we all know the first thing Jared is going to say when he sees Blake Griffin: "WHAT'S UP?!"