It's been widely reported that the talent in the 2013 NBA Draft was much worse than in prior years. In this article, two NBA scouts rank the centers drafted in the last three years.

Bright Side of the Sun is extremely fortunate to get input on this story from two long-term NBA scouts who really have been dialed into the NBA Draft for every year covered in this article.

Kris Habbas is the Managing Editor for nbadraftinsider.com. You all know Kris best as a contributing writer on BSotS and for SBNation NBA, but Kris' real full-time NBA-related job is scouting college basketball. Kris spends all year watching and interacting with players as well as their agents and NBA front office personnel.

Amin Elhassan is currently a senior NBA writer for ESPN.com, who's been working there for the past year, but previously worked several years in the Phoenix Suns front office as a video coordinator before working his way up to NBA scout and then Assistant Director of Basketball Operations.

We looked at the top three drafted C or PF/C in each of the last four drafts including 2013, twelve players total. Only under consideration are those who will work most of their time in paint on each end of the court.

The first takeaway is that 7-foot pivot men with basketball skills are not that common. Eleven have been taken in the top ten since 2010 and only a handful later than that, despite the NBA's love of size and length.

Many of these players can play the PF position but can also play C in the NBA much like Amare Stoudemire did for the Phoenix Suns and Tim Duncan has done for the San Antonio Spurs. In this group, only Meyers Leonard, Enes Kanter and Bismack Biyombo are pure centers due primarily to a lack of a reliable jumper and/or mobility to defend the other team's PF.

Of course, there were a lot more pivot men taken in these four drafts, and a few of them are better than those listed above. But the chances of a full-time starter at C taken after the 10th pick is pretty slim. I count two since 2010: Larry Sanders and Nikola Vucevic.

So evaluating the top ten is a good, simple place to start. More than half of the 7-footers taken in the Top-10 since 2010 are already starters or should become one on opening night this year.

Trying to ignore hindsight where possible, Kris and Amin separated the cream from the crop in terms of NBA upside at the time of the Draft.

**The players within each tier are listed alphabetically. They don't necessarily think Davis is better than Drummond, for example.

Kris Habbas commentary: "Basing this solely on potential; Anthony Davis (2012) and Andre Drummond (2012) are the top two centers selected in the last four drafts. They each have unique skill-sets that will allow them to dominate the game."

Amin added DeMarcus Cousins (2010) to this top tier based solely on skillset and potential. Cousins dropped in his draft due to maturity concerns, which have since played out in the NBA just as feared.

Each of these bigs mentioned will be under perennial consideration for All-Star nods, and have separated themselves from the rest of the pack of big men drafted in the last four years.

**The players within each tier are listed alphabetically. They don't necessarily think Monroe is the lesser of the two.

Kris Habbas: "The next tier consists of Monroe and Cousins. Neither are great athletes, but on the offensive they have the potential to impact the game and dominate the competition. Monroe is more versatile as a passer and face-up play-maker while Cousins can score over the shoulder and is physically imposing inside."

Amin already had Cousins in his first tier, and now adds Derrick Favors to the second tier with Monroe. This ranking is based solely on potential (as requested for this article), as Favors has not forced himself into the starting lineup for the Jazz while they kept playing veterans Al Jefferson and Paul Millsap to fight for the 8th seed in the conference.

Here is where the evaluations start to really differ.

While everyone else drafted top ten of the last four drafts are clearly behind the four horsemen - Davis, Drummond, Monroe and Cousins - their ranking based on "NBA potential" is partially in the eye of the beholder.

None have the ceiling of those top four, though admittedly Greg Monroe's ranking up there is based partially on his excellent NBA play since being drafted in 2010. Otherwise, his potential would arguably not have separated him from the group.

**The players within each tier are listed alphabetically. Amin doesn't necessarily think Len is better than Kanter, for example. 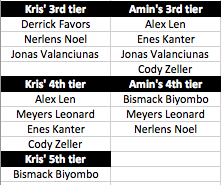 Kris identifies Derrick Favors, Nerlens Noel and Jonas Valanciunas as having the highest upside of the remaining big men by placing them in his third tier.

Amin drops Nerlens Noel all the way to his bottom group due to lack of offensive repertoire and partially on his injury and the pre-draft maturity issues that scared off some teams.

He instead puts the Suns' Alex Len in his third tier along with Kanter and Cody Zeller to go with Jonas Valanciunas, while Kris rates those three lower than Noel.

Kris Habbas on the third tier: "Favors and Noel are both very limited prospects offensively, but have tremendous athletic potential and defensive impact. Their athleticism and ability to make an impact on the defensive end separates them from other one dimensional players that can either shoot, score, pass, or just block shots as singular talents. Both of their flaws on offense are evident, but over time can be developed into strengths."

Habbas on the fourth tier: "Len, Leonard, and Kanter all have upside as two way players, but it has not been shown consistently. All three have requisite skills on both sides of the ball as defenders and offensive players, but whether it be strength, conditioning, injuries, or all three have held them back to this point. At any point in their careers they can leapfrog the one dimensional athletes ahead of them.

On Len: "There is no question on the upside of Len as a prospect with his 7-1 frame, mobility, and ability to impact the game on both ends of the floor, but the same can be said for Valanciunas and Leonard. These three are the safer prospects to develop because they have a high basement.

On Cody Zeller: "Cody can score out inside and out to 15ft which is a skill his brothers do not have. If he maxes out his offensive potential Cody can be a solid 18pt 7reb a game center, but he falls short in length and on the defensive end. In a good system that can be masked to allow Cody to be a solid offensive weapon at the NBA level."

As you can see, there are not a lot of 7+ footers with big skills coming into the NBA anymore. Probably, this has to do with the fact that there aren't many basketball-skilled 7+ footers in the entire world, but I'm just spit-balling here.

And once those talented 7-footers hit the NBA, they don't always dominate the game. It takes a big man a while to get into the rhythm and catch up to the speed of the NBA.

But opportunity is still a huge separating factor on performance. Only three of the twelve top-ten picks reviewed here were regular NBA starters since their rookie year (Monroe, Cousins, Davis). Each team created the room at their position to take all the minutes they could handle.

Kanter and Favors, both with Utah, did not get that luxury. They were not able to outplay the veterans in front of them (Al Jefferson and Paul Millsap) while the Jazz fought for playoff contention the last two seasons. Even now, with both veterans gone, it appears that Kanter and Favors have the opportunity going forward but may still be best suited playing the same position due to their lack of offensive skills.

Valanciunas stayed in Europe for another year and just barely got his feet wet as a 2012-13 rookie. Look for him to become a regular starter for Toronto going forward.

Drummond got better and better as his rookie season progressed, and now projects to be a long-term starter next to Greg Monroe in Detroit.

Meyers Leonard and Bismack Biyombo, both ranked in the bottom tier by our NBA scouts, have a lot more growing to do if they want to become NBA starters. Yet they have the talent to have 10-15 year NBA careers.

What does that mean for the 2013 NBA Draft class of big men?

But they do compare favorably with anyone else taken in those years. Alex Len, Nerlens Noel and Cody Zeller may not make any All-Star games, but they should be quality big men and long-term starters in the NBA once they mature and get their opportunity.

For one thing, none of them will be expected to start at center on opening night.

Nerlens Noel will likely miss most of the season with his knee issue. He was traded on draft night for an All-Star (Jrue Holiday) and now plays for a team already hitting the reset button. By the time he sees the court, it might be Summer League 2014 right next to the Sixers' pair of 2014 high draft picks (theirs and New Orleans').

The Bobcats just signed Al Jefferson and still have Bismack Biyombo at center, so Cody Zeller will have to transition immediately to the power forward position to get big minutes. Zeller never played forward in college and almost never took a shot outside ten feet from the basket. Yet, Al Jefferson now owns the offensive paint for the Bobcats, so Zeller will have to completely change his game to succeed in the NBA.

The Phoenix Suns have incumbent starting center Marcin Gortat on hand, allowing Alex Len to slowly adjust to the rigors of the NBA himself. He should be the first center off the bench and could even play next to Gortat in some lineups because he can shoot a jumper. Gortat himself picked Len in a mock draft, projecting him as a PF in a twin tower lineup. The Suns have no incumbents other than Gortat who will take minutes from Len if he appears ready to play.

"Len has the potential to be every bit as good or better than every true center that has been drafted in the past three years. He has the size, can develop the strength, and has flashed the ability to score at and defend the rim. Doing that with consistency at the NBA Level is a different story and will be a challenge for him as it has been for most of his peers. Len does not have the upside of Davis, Drummond, or Cousins, but he has a much higher basement despite his foot injury."