Checking in on the latest off season developments of three Phoenix Suns players in the news.

It's the dog days of August, but Phoenix Suns players are still making news in their own way. Let's take a look around the globe for developments.

One giveaway to a player's high potential is props from peers. While Eric Bledsoe has some detractors and he's never shown great offensive efficiency, that hasn't stopped his fellow players from telling the world he's going to be a star. 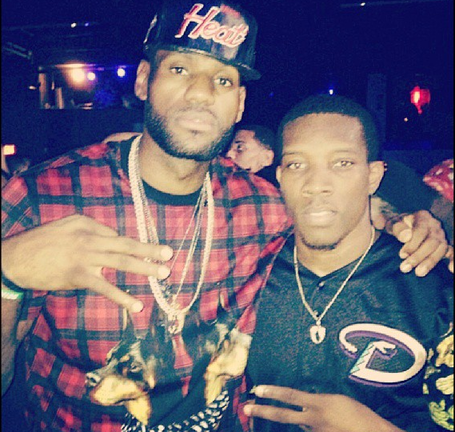 Notice Bledsoe's already rocking Arizona by sporting a Diamondbacks jersey at a James party while he does his charity thing - Wheels For Kids.

Caron Butler gushed about Bledsoe at last month's introductory press conference, calling him a "an explosive, dynamic guard who has superstar written all over him."

"I think he's going to put the sports world on notice," Butler said. "He's a relentless worker. The second he arrived yesterday, he was in the gym. That's the attitude and approach he's had all off season and I think he's going to be great this year and years to come."

$100 million point guard Chris Paul has been touting his backup Bledsoe for years, including this comment at practice before the end of last season.

"Bled is one of the best guards in our league," Paul said after practice Sunday. "I've said it all season long. I'm enjoying playing with him right now because there's no way he can be here next year because we probably won't have enough money to pay him. He should be a starting point guard in this league next year."

Whether Bledsoe becomes a star or not, it's nice to hear NBA players think he is one already.

Goodwin won something called the MVP of the Rookie Transition Program last week. Who knows what that is. Maybe it's their version of 'Miss Congeniality'. Regardless, for an 18-year old to be named an MVP of any kind of rookie program in which he's the youngest player is a big enough deal to make a deal out of it. 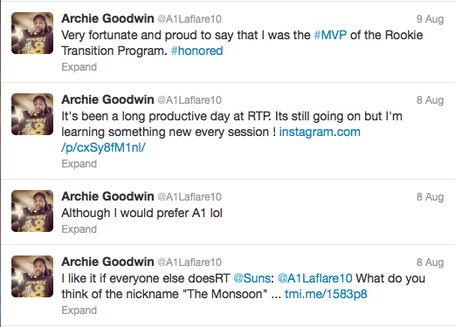 I included in the pic his last two tweets, since they are relevant to recent discussion. Archie will live with Monsoon, he says, but he already has a nickname he likes better.

Yeah, that fits the latest nickname craze by combining numbers and initials, but it's not bad. He's much more the shizzle on the sizzle than a seasonal afternoon rain shower that doesn't exist during basketball season, that's for sure. No offense, Espo. But Archie this one.

Our own Goran is having fun with promo spots as his country gets set to host Eurobasket 2013. Following his twitter account is refreshing to say the least. He's posting a bunch of short vids and pics to keep us all in the loop.

On the basketball court, Goran Dragic got a bit of retribution from his fight a week ago, as Slovenia reached another prep tourney Final on a buzzer beater by Dragic for a 55-54 win over Turkey. Dragic scored 16 points in the win, including the buzzer beater, as Slovenia continued to roll in warmup games.

Our own BSotS reader, pece, recaps the game for us. Check out the link. Pece gives an awesome recount - I really hope he covers the entire Eurobasket tournament!

Dragic got into a fight and was ejected just a week earlier in another warmup game against this same Turkish squad. This time, Dragic restrained himself and led Slovenia to a tighter win while the opposite offender, Balbas, did not register in the box score. Turkey played a tougher game thanks to playing Emir Preldzic and Omer Asik, among others, who had not played a week before. Slovenia has now beaten Turkey four straight times.

Slovenia plays in today's Final for the 2013 Belgrade Trophy. Turkey will play in the third-place game.