A view on win shares: Will the Phoenix Suns share the wins?

The Suns will likely be very bad next season. Execrably bad. But exactly how bad? I will make a case full of arbitrary decisions and loosely factual statements to examine how previous win shares might be useful in calculating a win total to pinpoint where the Suns may land in the gallows of the league next season.

Share All sharing options for: A view on win shares: Will the Phoenix Suns share the wins?

**Perfunctory Disclaimer - No advanced statistic is absolute.  They may, however, be used as guidelines in part of a more comprehensive overall analysis.  Many other tools and techniques should be considered and utilized when determining the value and performance of players.  If you believe that win shares fall somewhere between necromancy and heresy then this may not be your article.**

I like to pillory the Suns at every available opportunity (mostly because I'm a jerk and a bad fan), but barring catching lightning in a bottle the Suns are going to take their share of savage beatings in the upcoming season.  It's inexorable in the mold of death and taxes.  Speaking of death and taxes I sure am glad last season is over...

Just because they're going to be among the dregs of the league doesn't mean it won't be a much more exciting, entertaining brand of basketball, though.  Who favors watching things they care about grow and flourish as opposed to wither and die (Jim raises hand)? But amidst the hullabaloo, how many games can our crappy team win?

There are some fairly byzantine rules involved in calculating win shares, which can be viewed here on basketball-reference.com, but the gist of it is fairly simple.  The goal is to gauge an individual's contribution to his team's wins. This is done by determining offensive and defensive win shares and adding them together.  WS/48 is adjusted to compare player performance over a fixed period of time.

The system calculates points produced and offensive possessions for a player.  This uses two formulas - 1. a player is assigned a number of offensive points (marginal offense) which can be divided by 2. the team's points per win (marginal points per win) to produce offensive win shares.  Voila!

These are much the same as offensive win shares, but utilize defensive rating as opposed to points produced in the calculations.  There are other differences in the formulas used. 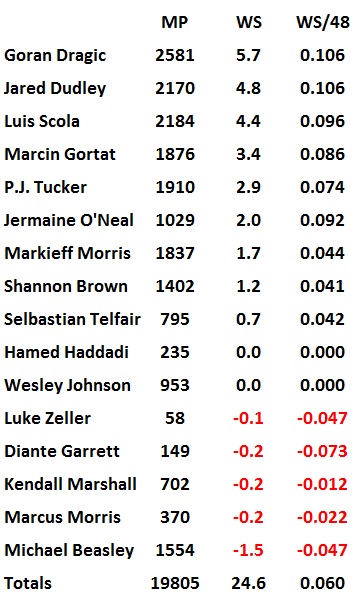 What can we glean from this chart?

1. Dragic and Dudley led the team in WS/48, but Dragic was only 98th in the league in this metric.  That means if all the talent was distributed around the league equally every team would have at least three players before a Sun from last year made a squad.

2. The combined win shares of the players on a team should approximate the team's win total, but aren't expected to perfectly match the total.  In this instance the Suns won 25 games and received 24.6 win shares.  Overachievers.

3. The mean WS/48 is .060.  The players above that mark were Dragic, Dudley, Scola, Gortat, Tucker and O'Neal. Those were the less atrocious better players on the team last season so that registers. 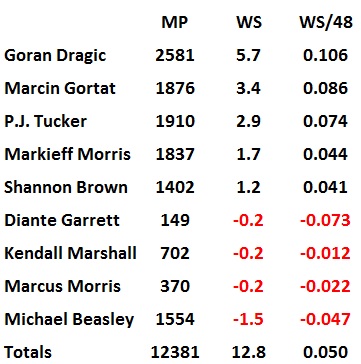 We can see here that the remaining players from last season's tire fire failed to meet even the underwhelming production of the departed.  Adjusted to a full season's worth of minutes that combined WS/48 would be good for about 20.4 wins. Expand Beasley's role and that could easily dip into the high teens.  Top three pick here we come. 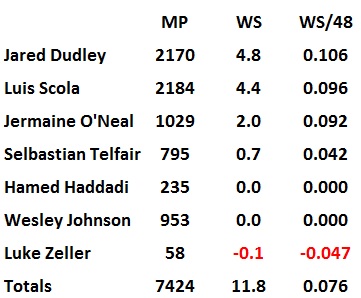 As aformentioned, the exodus of talent from the roster this summer was staggering.  Or not.  But they were better than the players still stuck here who remained.  It actually looks like we could field some very competitive scrimmages between these squads, but "Team Jared" would probably prevail due to "Team Goran's" repugnant bench. 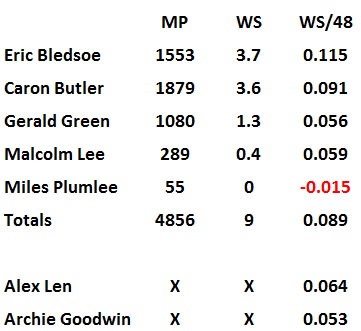 Here's where things get interesting... as if you weren't already captivated.  Obviously Bledsoe was the key (non-draft) acquisition of the summer, and according to this he will instantly be the best player on the team, but even throwing in the other spare parts these guys rate out favorably compared to last season's Suns.  I guess the Suns were so bad that a person could throw darts around the league and accidentally field a better squad? 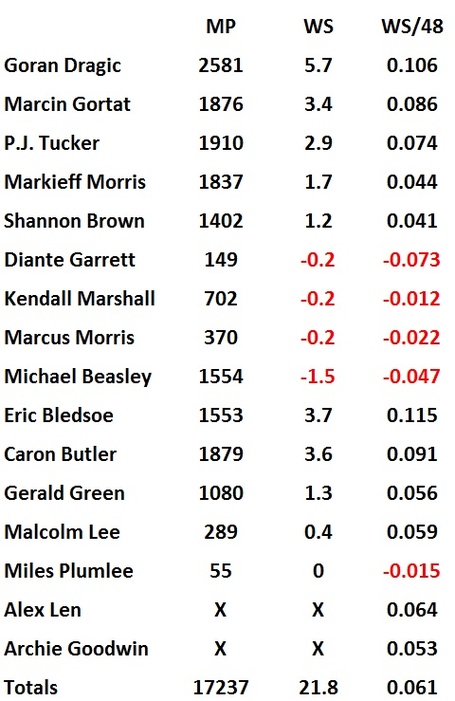 Plop the new guys in with standing guard and we see that nothing much changes.  The players coming in had a slightly higher WS/48 number, but the players leaving played more minutes.  When we adjust this to approximate a season win total the number of win shares is 24.9.  25 wins.  Right back where we started.

Who doesn't love balloons?  Anyone that doesn't is probably Scott Howard a cruel self-loathing bastard who's lost the will to live.  All balloons are great.  Water balloons? Check.  Balloon animals? Check.  However, with these we must never forget to decapitate their makeuped manipulators.  Remember kids... clowns are evil, but knives are sharp.

And... hot air balloons.  Tell me you don't crane your neck anytime you see these launching or landing.  That's what I thought.  A passenger added onto a balloon will go in the direction of the balloon.  If it's ascending, he's ascending. If it's descending, he's descending.  You know what else helps a balloon rise, though?  Getting rid of dead weight (see Beasley, Michael).

Two of the new Suns played for a very good Clippers team that made them an afterthought.  More teams were game planning for Chris Paul and Blake Griffin than Bledsoe and Butler.  Shocking.  Enter a much weaker team as a more instrumental piece and hit the first domino.

Hot air balloons can also not ascend beyond the earth's atmosphere, so draw your parallel with the Suns there...

1. Michael Beasley will be waived/stretched.  Moment of silence.

2. Channing Frye may or may not play.  I've heard the saying, "No news is good news." bandied about... but in this case I don't get that impression.  We all want Channing to rejoin the team, but with each passing day I become less confident that will be the case. Hopefully I'm wrong, but the Suns will be back at USAC working out pretty quick.

3. Diante Garrett and/or Malcolm Lee will most likely excluded from the regular season roster.  Hard to see Garrett getting a lot of minutes as a fifth point guard.

4. The rooks will get some burn.  How much and whether my completely arbitrary brilliant idea for plugging in a WS number will be remotely close will remain to be seen.

5. Chaos will ensue.  Injuries, trades, blatant tanking and the like will scatter this analysis (and I use that term loosely) into the wind like the multicolored leaves of fall soon to be blanketing the desert landscape. 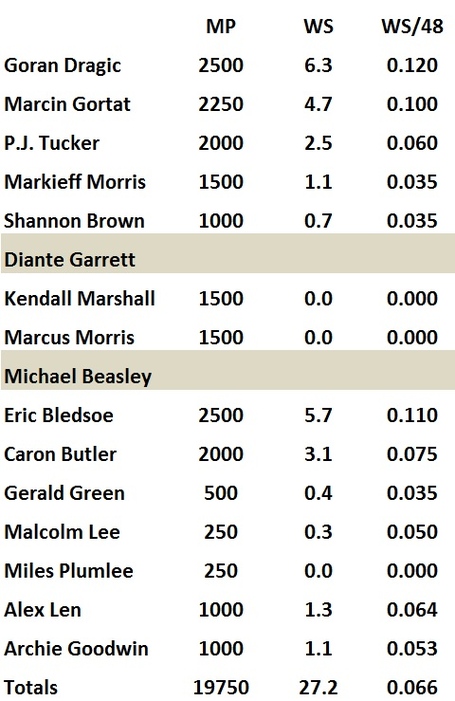 More trickeration.  Now I am the manipulator... minus the makeup.  Please don't kill me.

I've spread around the minutes a little.  Sprinkle here, dash there.  Both of the rookies are playing more than Marshall last year. They better. Trade filler guys... not too many. Projected starters - 25 to 30 minutes per game.  Adjustments in WS numbers?  More projections are actually up than down.

I've got them at 27 wins.  That seems optimistic to me.  If you gave me an over/under of 27 I'm taking the under.  Might be a chance for some of you to bet me before the beginning of the season.  I have no qualms with gambling.  I consider myself a maverick. The good kind.  Not the Dirk Nowitzki oh my god I can't believe you're bitching again kind.

Touching back on one of my other considerations... Channing Frye.  If he is healthy it could actually provide a boost. Put it in whatever context you want, but it is possible he could be the best player on this team if he's healthy.  Let's consider inserting Frye in at his WS/48 number from 2011-12 (.106) and project that at 2500 minutes.  5.5 win shares. The players he will be taking those minutes from will contribute about one win.  One. So in a wins above replacement aspect, Channing could easily boost the team by 3-4 victories... not even considering the way he stretches the court to make things easier for his teammates.  Think hot air balloon.

Hornacek's career WS/48 was .154.  That would easily make him the best player on this team.  Easily.

By the third year of his career he was at .149.  Year four... .182.  Hornacek was older coming into the league, but the Suns would be lucky if any of their current youngsters can match his level of production.  That kind of career has already sailed on Goran.  The Suns other recent draft picks are also conspicuously absent from such a discussion. Bledsoe, Len and Goodwin are the hopes on the roster.

The Suns may very well not possess a player who will have a career as great as their coach.  Not a knock on them. Jeff was a great player and one of the best shooters in NBA history.

But... (there's always one of these with me)

Hornacek was the third option on teams that competed for, but ultimately fell short of, NBA titles.  Third.  Chambers and KJ with Phoenix.  Stockton and Malone with Utah. The Suns don't have a player that has even close to a coin flip's chance of being as good as a player who was third best on championship contending teams.

We're going to need to share some more wins.

*For those of you who got bored and skipped to the end... you missed a riveting balloon discussion.