Eric Bledsoe was Ryan McDonough's first major acquisition as the Suns' general manager. How does the fiery guard fit into the Phoenix lineup? Let's take a look at the film to find out.

Eric Bledsoe was one of the hottest commodities on the NBA trade market over the last year, and it's not hard to see why when watching his highlights. Calling him explosive is a bit of an understatement. However, highlights only tell part of the story. I wanted to go deeper and get a better idea of who Eric Bledsoe really is as a player. To accomplish this, I watched roughly 500 of his 800 offensive possessions logged on MySynergySports. Let's break his game down.

In typical Jacob fashion, I went way overboard and wrote a ton of words. So I decided to break it down into two parts. In Part I, I'll be examining his play with the ball in his hands. In Part II, I'll be looking at his play in the open court and off the ball.

From 2004 to 2012, Suns fans were treated to one of the best pick-and-roll point guards of all time. Steve Nash was the master. It wasn't just his pinpoint pocket-passing that made him so great though (although it was beautiful to watch). What made him so special was the combination of the passing ability with his savvy and tremendous shooting touch from all over the court. The Suns pick-and-roll was so difficult to defend because there was no way you were going to be ale to take away the pocket pass to the big, the pass to the corner, the drive AND the pull-up jumper. Nash was a complete pick-and-roll point guard that could burn you any way he liked.

That's not Bledsoe. However, Bledsoe does like to run the pick-and-roll a lot. In fact, it was his most common play type at just under 31 percent of his possessions. He was decent but nothing spectacular at 0.75 points per possession.

When Bledsoe comes off the screen and has a clear lane to the basket, he can explode to the rim like few others. 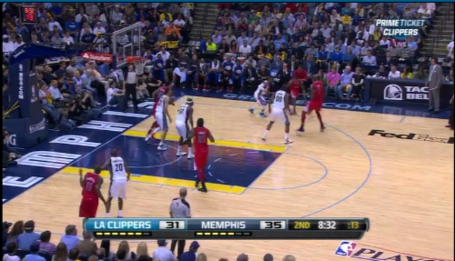 Here, Bledsoe receives the ball on the wing and Lamar Odom comes to set the screen. 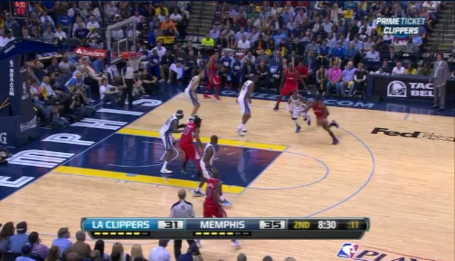 Neither Darrell Arthur nor Mike Conley jump out at Bledsoe and in fact, they get in each other's way. That's all Bledsoe needed as he turned the corner with an open lane. Conley has no shot at this point. 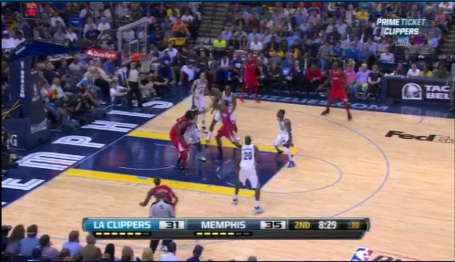 None of the other Memphis defenders commit to helping on Bledsoe and so he takes it all the way. Notice where he takes off from ... 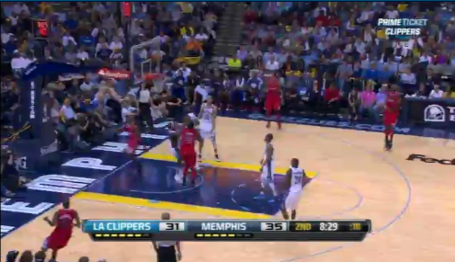 ... and notice where he lands. Explosion. Also two points and a glimpse of what Bledsoe can do in the pick-and-roll.

Bledsoe also shot a very respectable 39.7 percent from deep last year. His shot improved greatly from his first two seasons in the league. Bledsoe's shot is almost more of a set shot than an actual jumper, but if defenders go under and give him plenty of space, he can knock that shot down. 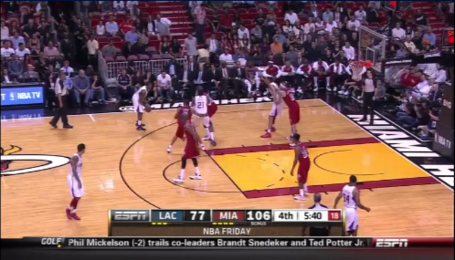 The defender is already playing way off Bledsoe to begin with, and when Turiaf comes to set the screen, his man stays with him. That means nobody is within three or four feet of Bledsoe. 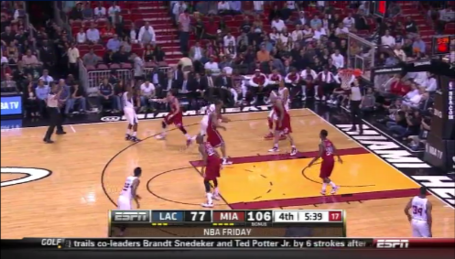 Bledsoe takes the shot and knocks it down and the defender still isn't even close to in his face. It was a very limited sample size last year, but Bledsoe connected on four of his nine attempts from deep while running the pick-and-roll. If teams go under to cut off the drive, Bledsoe has the capability to make them pay.

That's the good. Unfortunately, there is plenty of bad as well. Bledsoe really doesn't have any sort of in-between game. He doesn't really have a pull-up jumper and his floater is far from reliable at this stage. He also doesn't have the patience or savvy of Nash and gets himself out of control too often. His drives are often reckless and his passes wild. 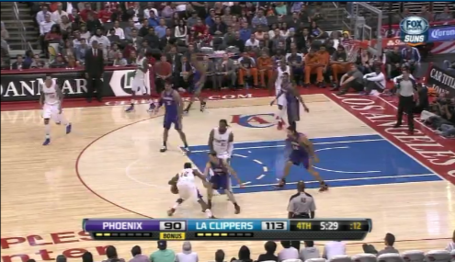 Here, Turiaf sets a screen for Bledsoe against our beloved Suns. As you can see, there isn't a whole lot of space for him to work with and all the Suns are in help position to guard against the drive. 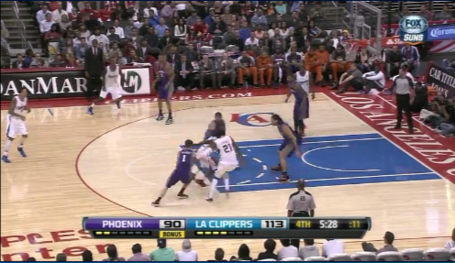 Bledsoe fails to recognize this, ducks his head and drives anyway. Goran Dragic goes over the screen and chases him from behind, Jared Dudley drops down from the top of the key and Luis Scola steps up to surround Bledsoe and cut off the drive. 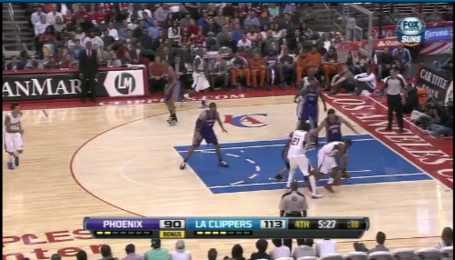 With so much pressure, Bledsoe loses control of the ball a little bit... 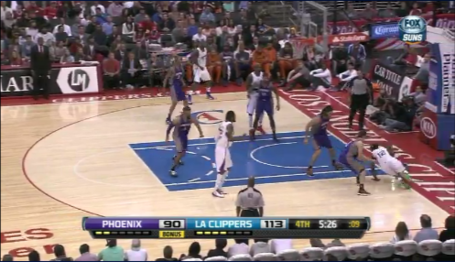 ... and then loses control of his body as he tries to recover and slides out of bounds. This is the kind of reckless play we can expect from Bledsoe. With all the excitement of the highlights comes the bewilderment of lowlights like this one.

At this stage Dragic is still the superior pick-and-roll ball-handler and should initiate the offense on the majority of plays. But when teams start to key in on Dragic, all he needs to do is swing it to Bledsoe an let him go to work from a different angle. It makes the Suns' offense more unpredictable and makes it more difficult to defend.

Bledsoe isn't a bad isolation player. It's not something you'd like to see him doing a whole lot but his 0.77 points per possession ranks 114th overall, which isn't too shabby. Here's an example of what he can do with a mismatch. 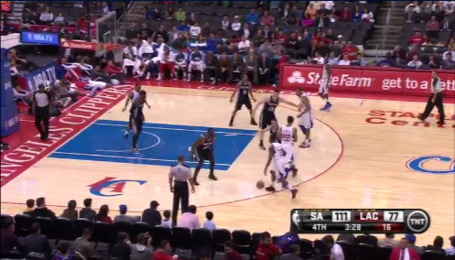 Matt Barnes and Bledsoe run a quick pick-and-roll and the Spurs switch it. 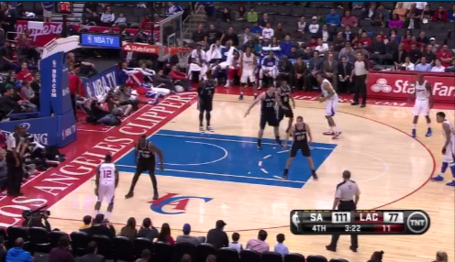 Bledsoe recognizes the mismatch and pulls the ball out to the corner to give himself some space. 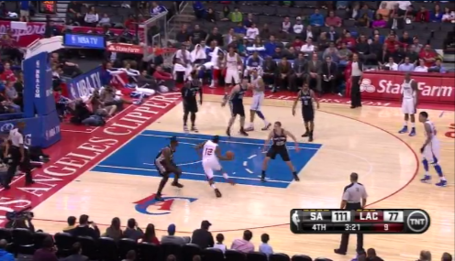 Bledsoe has a major speed and quickness advantage, and he takes advantage of that to blow by his man. Because of the way the Clippers spaced the floor the help defender was too far away to stop him. 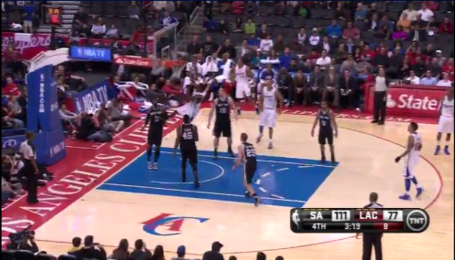 Bledsoe explodes to the rim and throws it down with authority.

That's what Bledsoe can do in isolation situations. He has a quickness and athleticism advantage over most of the guards he plays against, and that's even more true when he can force a switch and go up against a wing or a big. Unfortunately, he doesn't seem to use that advantage nearly enough and instead chooses to settle for jumpers, which definitely is not his strength. That's where the low percentage (37.7 percent form the field) comes from.

Bledsoe can be effective in isolation situations if the team can put him in the right spot on the court, keep the floor spaced and get him mismatches. But he's not a guy you want to give the ball to on a consistent basis and tell him to go get a bucket.

Dragic is actually a phenomenal isolation player according to Synergy. He's ranked 20th overall and scores 0.97 points per possession. He only isolated on 11 more plays than Bledsoe did last year despite playing a lot more, so it's not something he looks to do a lot. But adding another exciting ball-handler in Bledsoe should both take some pressure off Dragic and give him more opportunities to attack.

During the Suns magical run to the 2010 Western Conference Finals, the second unit emerged as one of the team's biggest strengths. Leading that charge from the bench was a pair of dynamic guards in a younger Dragic and Leandro Barbosa. Bledsoe lacks the natural scoring ability that made Barbosa the Sixth Man of the Year as a Sun, but he does offer a similar speedy and athletic presence and is much more of a pest defensively.

This backcourt might be under-sized, but there's potential for these two to mesh very well offensively.

Stay tuned to the Bright Side for Part II, coming soon!