It's time to empty the notebook of various odds, ends and observations regarding your Phoenix Suns in recent days. The season is fast-approaching!

Goran and Zoran another brother tandem?

With Zoran Dragic playing so well for Slovenia and an unrestricted free agent in the NBA (undrafted, signed with Houston last year but didn't make team), is it possible that the Suns would sign Zoran to a non-guaranteed training camp deal?

In Slovenia's first win of the second round yesterday, over Italy, Zoran had 15 points and 11 rebounds, while brother Goran had 22 points and 6 assists. That pair won the game, just as they had helped Slovenia advance from the first round.

GM Ryan McDonough and coach Jeff Hornacek spent the past week watching/scouting players in Eurobasket 2013. The move would be a feel-good move to get Goran in the right frame of mind during a sure-to-be losing season. But the competition for minutes will be stiff, and Zoran simply isn't as talented as Archie Goodwin, Shannon Brown, Marcus Morris or P.J. Tucker, let alone Eric Bledsoe.

Goran to the rescue

The Phoenix Suns won't be a great shooting team in 2013-14 - which might make life difficult on the court. But coach Jeff Hornacek, who wants the team to exceed 103 points per game this season, sees a potential solution right here on the roster.

"Goran is a good shooter when he primarily thinks about scoring," Hornacek said to Slovenian media. "He is slightly worse in situations when he first looks for an assist and then suddenly the space frees up for him to shoot.

"I'll try to instill him a mentality of a shooter, one who is more aggressive searching space to score. In NBA the situation will be slightly different than here, that's why we'll need him to shoot more."

Hornacek was an undersized two-guard who grew from a second-round pick into an All-Star in the NBA as a combo guard who could get you 20 points and 5 assists a game through intelligent play and a remastered shooting stroke. It's apparent he sees a lot of similarities in Dragic to himself and former running-mate Kevin Johnson.

Bright Side contributor Pece gave us some great insight on flight of the Dragic, both Goran and Zoran, as they fought to best a talented Italian team that had gone 5-0 in Round 1.

Gortat was cleared to resume play a couple of months ago, and just capped off an otherwise unimpressive Eurobasket 2013 with a solid game: 19 points, 12 rebounds. He is healthy and will get three more weeks of rest before the 6-month grind begins.

Rookie center Alex Len had a pair of ankle surgeries to repair stress fractures, but he was cleared just this week to resume all activities. 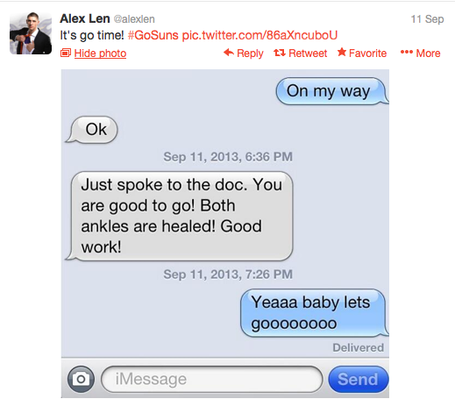 Of course, this is just via text/twitter and we don't know who gave him the go-ahead for sure (and I doubt the official go-ahead is given via text anyway), but this fits the timeline that McDonough gave last month. And, the tweet was RTd by the Suns player development coach, Irving Roland. Len has been jogging for weeks now, but it appears he's cleared for full basketball activities now. Let's hope he stays healthy.

Channing Frye told Bright Side FIRST that he was cleared by doctors to resume all basketball activities. Now, he just waits for the Suns to concur. Ryan McDonough was in Slovenia all last week, so maybe that announcement will be coming in the next few days.

With any luck, I will get my first "hard" media credential to Suns games for the 2013-14 season in the coming days, replete with lamination, a head shot and everything. When it comes to guaranteed seats on "press row", space is limited. Team employees (like @Espo and @TheMattPetersen), radio (like @Craig620), TV and traveling scouts get first dibs. Local-based national media and beat writers (like @PaulCoro) get in too. After that, it's a dance to fit in all the websites/bloggers who want to cover games.

Last year, my first year replacing overlord Seth who moved to the big D.C., I went through a probationary period with temporary single-game passes based on seating availability. I ended up making something like 40 of the 44 home games, including preseason. The media relations group just sent out a call to arms for 2013-14 credential requests the other day. Cross your fingers that I don't have to do the "dance" all season again.

The Suns have been excellent to bloggers in recent seasons. I must give a huge shout-out to D.C. Headley, Julie Fie (@suns_jfie), Vince Kozar (@sunsstats), Lon Babby and all the game-ops guys for treating us with such respect. Gone are the days of team coverage only from national media and local beat writers. Unpaid, part-time but somehow overworked and dedicated bloggers are now part of the media fabric. Last year, I counted at least six bloggers (sometimes more) on a game-to-game basis with media credentials. Some with season-long credentials (like Kris Habbas for SB Nation NBA, and Kevin Zimmerman for Valley of the Suns), some with game-to-game passes like me. I hope I'm in the former group this season.

Even though this isn't my real job, it would be a great honor to take that next step in my hobby-job. I work quite hard at my real job (you know, the paying one) but I just love covering the Suns and being able to do it in person over this past year has been a dream come true. I look forward to a long hobby-job down at US Airways Center as the Suns rise back to the top of the heap, this time with me in tow.

The Suns board buses and head to Flagstaff as soon as the mandatory session with media ends at about noon or 1 on Monday, September 30. They will check in to their dorm rooms and likely have a team dinner to get to know each other.

As always, the NBA "training camp" is really just a get-together for teammates to meet and greet with each other while the coaching staff installs the basics of any new system. Five days is five days, meaning not a lot. The meat of installing any game plan and deciding on rotations is done in preseason games.

The training camp culminates with a public scrimmage (Noon) at the Walkup Skydome in Flagstaff on the NAU campus, the first time since 2004 that the Suns have played basketball in that dome.

With Goran Dragic, Slava Kravtsov and Marcin Gortat over in Europe, and Alex Len recovering from ankle surgeries, the Suns have not had a full compliment of players for voluntary pickup games at any one time.

There have been no leaks of who actually HAS been involved in pickup games over the past few weeks, if any, but the guys who have been in town are the same ones who were here all summer: Markieff and Marcus Morris (who recently spent time in Philly after losing a grandmother), Archie Goodwin, Kendall Marshall, P.J. Tucker. Miles Plumlee moved to town late last month.

None of the rest have made it known they are in town yet. Without an in-town leader who rallies the troops, there really is no reason to cut the summer vacation short before the grind of a long season starts.

Media Day might just be the first time many of these guys even meet.

Where we will find out about this team is during the preseason games that take place in October. Will they find a way to be high-scoring, or will they just be high-shooting instead?

None of the preseason games are on local TV, but I will be there (hopefully) for the three home games to give you insights into how they are playing.

The Suns finally start the long-awaited 2013-14 season on the night before Halloween, October 30, at US Airways Center. Despite being a season predicted with a bunch of losses, the Suns will hopefully be entertaining in defeat on most, if not all, nights.