Bringing back Jeff Hornacek (twice) to save the Phoenix Suns

I depart from conventional wisdom in terms of which former Suns player could turn this franchise around... because I think the team is too far gone for one player to return the franchise to title contention status. So I've decided to bring back Jeff Hornacek. Again.

Share All sharing options for: Bringing back Jeff Hornacek (twice) to save the Phoenix Suns

I know what you're thinking.  Why would I want to bring back Jeff Hornacek when I have my choice of all-time greats such as William Bedford and Elliot Perry (who rates very favorably in the nickname category).  Well... even Tom Gugliotta couldn't push this team back into playoff contention so I'm just going to have fun.

Obviously there are concerns with this line of thinking.  If prime Hornacek realizes he is being coached by current Hornacek there could be disastrous ramifications with respect to the space-time continuum. That's why I have devised an ingenuous stratagem to forestall this type of revelation.  We will simply have coach Hornacek wear a mask. Foolproof.  After all, Superman just needed a pair of glasses to keep everyone in the dark.  This should work twice as well! 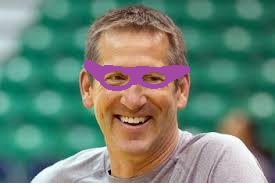 The whole name thing might be a hitch too, so we will simply call coach Hornacek... coach Honracek.  Problem solved.

Besides the hilarity of this situation, there are even basketball related issues that make this somewhat make sense. Hornacek was a pretty outstanding player in his own right.  Was he Charles Barkley?  No.  Was he Steve Nash?  No. But dude could still ball.

Hornacek was an all-star in his last season playing for the Suns in 1992. Deservedly so, considering he was a 20/5/5/2 player.  Not exactly an easy feat.  He did this on remarkably efficient shooting from the field (.512) and from three (.439). This was indicative of a high standard of offensive excellence throughout his career.  Although he never accomplished the feat of a 50/40/90 season, he came as close as .003 off in free throw shooting (.897) in the 1990-91 season.  He was literally one missed free throw away.

He actually had several narrow misses, as one might expect since his career numbers are close to the mark - .496/.403/.877.  Jeff would even fit the mold of the Suns new system, as he fit the mold of a point two guard during his career.

Then there are intangibles.  Hornacek played the game the right way and carved out a career based on work ethic. Talent aside, who would you rather have mentoring the young players on this team... Charles Barkley or Jeff Hornacek? Obviously the luminaries in the FO feel that Hornacek (Honracek) the coach is capable of this task, so it seems like he would also fill the role as a player and teammate.

And who would be more qualified to help run Jeff's new system than himself?  He knows all about pushing the ball and would help make this team more exciting while the rebuild is still in full swing.

My entertaining (at least for me) diversion aside, this Suns team as currently constructed would be horribly mismatched with a star in his prime... at least any the Suns have had.  All it would do is let the team fight for a low playoff spot. That's about it. If we play this game again in a few years it will likely be much more satisfying. Something along the lines of acquire some good young talent first and then sprinkle in a veteran star.

Or we could always just use Hornacek as trade bait to fleece some other team out of an MVP talent.

Or maybe we'd just be better off with Socks and stick to the top five pick in the draft approach.