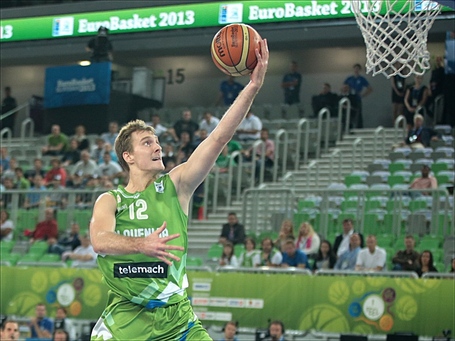 Just 16 hours after a bitter defeat in the quarterfinals to France, Slovenia, led by the Dragic brothers, destroyed Serbia with 92:74.

Serbia last lead by a point in the 3rd minute of the first period, from then on, the game was all one way.

By the end of the first quarter, they were already up 30:16, and despite a late 3rd quarter push, Serbia never got within 10 points again. Everything that bounced out yesterday was going in, the fast break was working, the defence locked down the paint which resulted in 6 steals and 12 turnover points, most of them by Zoran.

Goran was mostly busy attacking the paint and then kicking it out to the perimeter, where most of the shots went in (40% team for 3 PTS). Late in the 4th, he hit some big shots, thus ending all hopes for Serbia.

Of note: Both Goran, Zoran and a few of the other players thanked the fans again, the turnout was larger than expected, and the crowd was cheering start to finish, as it has been for the whole tournament.

Also goran mentioned the medical staff had their work cut out for them, he was supposedly on some painkillers, but hopefully nothing serious, as he looked fine, if dead tired.

Slovenia is set to play another game tomorrow, the winner will place 5th, which doesn't really change anything.

Since this is my first recap, feel free to edit the idiocies=)