In the U.S., today is known as the first NFL Sunday of the year. But in Europe, many eyes are on Eurobasket 2013 to watch Phoenix Suns' Marcin Gortat struggle, Slava Kravtsov help his team win and Goran Dragic become the Slovenian's floor leader.

For one Phoenix Sun, this past week has been a nightmare. But for two others, the experience has been thrilling so far as just might turn into a party at the end.

*all pictures courtesy of fibaeurope.com 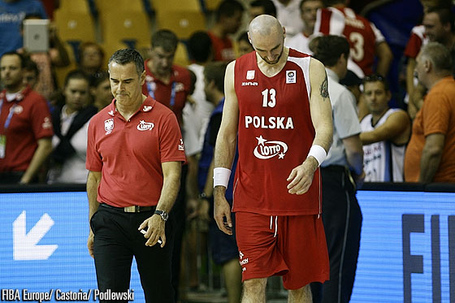 After missing nearly four months of play time while recovering from a stress fracture in his foot, Marcin Gortat has seen his lowest national team production in a long time. After leading Poland in last year's qualifying round with 21 points and 11 rebounds per game, Gortat's production has dipped to 8.2 points and 6.7 rebounds in 4 contests, all losses.

Gortat foretold of the pressure early last week, before Poland rolled over.

"Obviously there is a lot of pressure not only on the team, but on my shoulders," Gortat dead-pans.

"I know that, I've realised it a long time ago and I am ready to take the responsibility."

We don't know if it's the foot, or if it's so much time off or what. Eurobasket is full of tough competition, but Jan Vesely was one of those big men who dominated Gortat this past week. That's something rare to happen in the past. 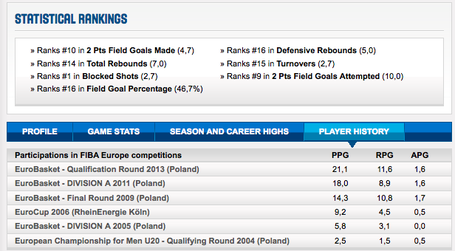 As you can see, he's been a rebounding machine in recent years and a quality offensive threat. Not so this tournament.

Poland played a couple of games very close, but nonetheless are 0-4 with only one game to play in "pool play". The top 3 of 6 teams in each pool advance to the next round, so Poland is basically out of it already. Such a disappointment may have already reared its head today, as Poland got jackstomped by Spain 89-53.

Best case for the Suns: Gortat gets 3 weeks to heal further, work out and prepare for the long NBA season before training camp starts.

Best case for Gortat is that the extra rest works, and he can find his game again. 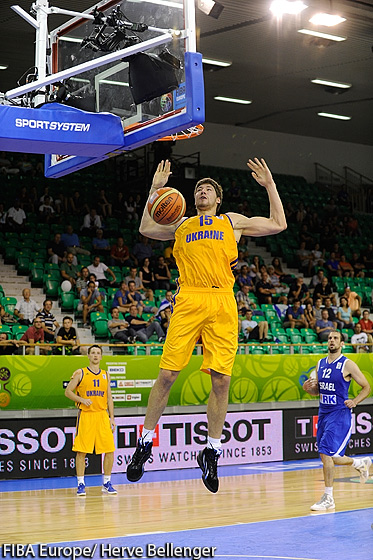 Newest Sun, Viacheslav Kravtsov, has a been a key, predictable cog for Ukraine, who is missing one of their youngest players in Alex Len (ankles).

A quick glance at Kravtsov's week looks quite similar to prior years. 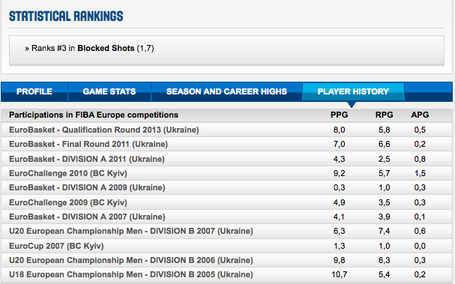 This scouting report shows how important Kravtsov is to Ukraine. Not quite as important as Dragic and Gortat to their teams, but important nonetheless.

Slava Kravtsov is team Ukraine's only active NBA player who, after being benched by the Detroit Pistons for most of 2012/13 season, is hungry for game action and is expected to have a breakthrough campaign under coach Fratello and use the momentum in the NBA. Kravtsov is Ukraine's most athletic big man, who can run the floor and finish in transition. He is also an intimidating force on defence, as his help side shot-blocking ability will provide Fratello's team with several igniting defensive stops-per-game. EuroBasket 2013 in Slovenia is, as for the majority of the players, going to be Kravtsov's third straight summer coached by the Czar.

It looks like Ukraine will move on to the next round of games in Slovenia, and it will be interesting to see how Kravtsov's production continues. He's been alternately very good (4 blocks in one game, 15 and 8 in another) and very pedestrian (6 and 1). 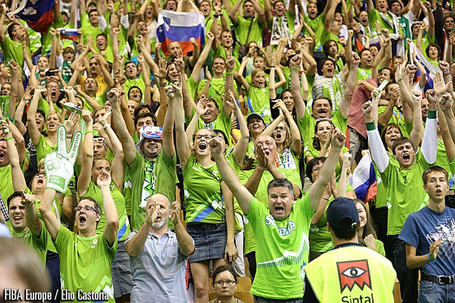 Clearly, the Phoenix Sun having the most fun this week has to Goran Dragic. Not only is he having statistically his best international tournament ever, but he's been able to meet - and even exceed - expectations of his country to boot. No one is under more local pressure than Goran Dragic, whose country of only 2 million people are hosting the tournament.

Dragic has hit game-winners, had game-changing runs and led his team in just about every statistical category in 3 games to date.

Take a look at his numbers, specifically the assists, compared to the rest of the field THIS year, and compared to his stats in prior tournaments. 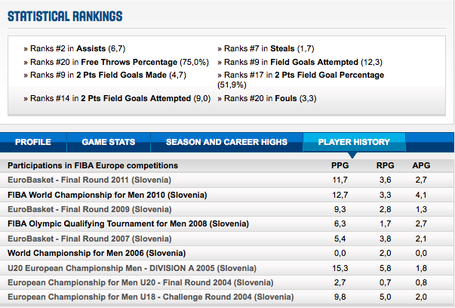 With former Euroleague MVP and Slovenian legend Jaka Lakovic fading into the sunset, Dragic has finally taken over the reins of the Slovenian squad full time while Lakovic plays backup minutes and/or the shooting position on the wing while Dragic handles the ball.

Slovenia is already 3-0, with a win over Group-mate and mighty Spain, so they appear to be a lock for Round 2 no matter what happens in their last 2 "pool" games against Croatia (2-1) and Poland (0-4).

A win over Croatia today would clinch a spot in Round 2.

In what might be Marcin Gortat's swan song for Eurobasket 2013, Poland faces Slovenia in the final game of pool play tomorrow. The likeliest outcome has Gortat taking the next three weeks off, while Dragic fights onward for a medal.