Ryan McDonough and team have done an amazing job of putting together a winning team on a shoestring budget. But does that help or hurt the Suns in trying to acquire better players in the trade market?

Share All sharing options for: Are the 2013-14 Phoenix Suns Too Much of a Good Bargain?

The tried and true maxim of making money through investments is to buy low and sell high. In theory, the goal is to find some undervalued asset, invest, and then watch as it increases in value, selling it at the top of the market. It works for almost everything. But does it work for an NBA roster? Is it possible to be too good at finding undervalued assets?

I wanted to quantify how much the Suns were paying for their wins this season and see how good of a bargain this team really is. Here's a chart showing each NBA team and how much they are paying per win so far this season. 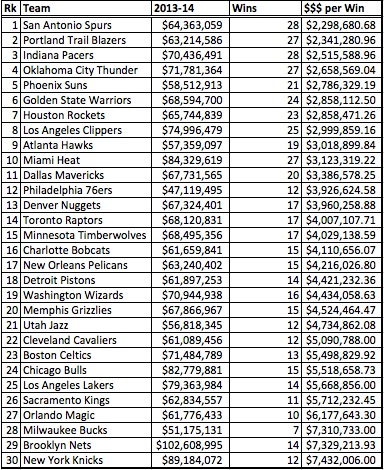 As you can see, the Suns are a hell of a bargain, relatively speaking. It's no surprise that the teams with best records end up being the best deals, but look how much those other teams in the top 10 are paying! Only the Hawks are spending less on total salary. In the top 5, the next closest team to the Suns is spending an additional $5,000,000. Not too shabby. And think about this: that number includes Emeka Okafor's $15,000,000 contract. If you subtract that, the Suns are far and away the best deal going in the NBA right now.

So what does this tell us? First of all, that Lon Babby, Ryan McDonough and Jeff Hornacek have done a bang up job of A) assessing and acquiring undervalued talent, and B) getting the most out of that talent on the basketball court. Most of us knew this without the data and the rest of the NBA is finding out every time they say, "Who?" when Miles Plumlee dunks on them, PJ Tucker snares a rebound or Gerald Green hits a game winner.

This is good news, right? We've got a front office that, after several years of misses and instability, is not only good at picking talent, they're good at picking cheap talent! It's the best of both worlds: lots of wins coming in, not a lot of money going out. Except we all know one thing: this roster probably isn't a championship contender just yet. The Suns need to get the vaunted "missing piece" that's the subject of so much speculation in comment threads. They need to acquire someone to put them over the top and in the same breath as the Heat, Thunder and Pacers.

Here's where the Suns' success in the bargain bin becomes a little more troublesome. Below is a chart of each Suns player and their value to the Suns expressed in Dollars Per Win Share. For the uninitiated, Win Shares are like PER in that they are a single value measurement of a players' on-court contributions, except instead of "efficiency", they try to value how many wins a player has contributed to the team. Head over to basketball-reference.com for a full explanation. 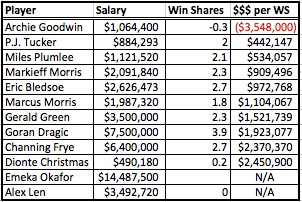 Due to space, I can't show you how this compares to the rest of the league, but suffice to say, the Suns' rotation players as a whole are smokin' deals. All of the Suns' regular rotation players are in the top half of the league in terms of dollars per win share. Even the Suns' two "worst" deals, Channing Frye and Dionte Christmas, are great deals by this measure. By way of quick comparison, Jared Dudley clocks in at $2.8M/WS, Marcin Gortat at just over $3M/WS, and Luis Scola at $3.4M/WS. The Suns clearly got a whole lot more bang for their buck in the off-season.

The problem with this becomes: how on earth do the Suns get equivalent value for any of the players on their roster? And how well do these players' value translate to potential trade partners?

In a hypothetical trade for just Kevin Love in order to make salaries match, the Suns would have to send either A) Emeka Okafor and a combination of players making less than $3.8M or B) some other combination of players making about $12-$18M (and of course, draft picks). If you're the Suns, option B is clearly out of the question as it would entirely decimate the roster. But if you're Minnesota, how is option A appealing without a lottery pick? "Hey, season ticket holders, in place of your top 10 power forward, here's some, um... efficiency! And some picks, that may or may not pan out." (They can't even get both Morris twins because the money doesn't work.)

And, then let's assume for a second that the Suns are looking at options outside of trading for a player on a max deal. Let's take Thaddeus Young since we're all about the power forwards around here these days. Now, if the Sixers are willing to accept Channing Frye, maybe a Markieff Morris and a draft pick, then I feel like that deal gets done. But what if they don't want Channing Frye? How do the Suns hit that $6-$10M window to make the salaries work without giving up Goran Dragic? Is a Thad Young worth a Goran Dragic? Is anyone?

Now I know there are ways around some of this. Minnesota could include another player to make a potential deal work or I may be undervaluing Channing Frye in the eyes of the 76ers.

But I also think that the Suns' asset situation isn't as rosy as one might think. No doubt, McDonough and company have done an excellent job in putting together a valuable roster on the cheap. But those deals might be so good that flipping that value for something "equivalent" in both the eyes of the Suns and potential trade partners may be more difficult than one thinks.