The Phoenix Suns have a golden opportunity to play the Harlem Globetrotters tonight against the struggling Los Angeles Generals. Err, Lakers.

After a dismal 1-4 road trip that marks only the second lull of the season, the Phoenix Suns receive a get-well card today in the form of a struggling Los Angeles Lakers team riding a 5-game losing streak in which they are losing by a margin of 17.8 points per game.

The Lakers are scoring, but they aren't defending. The Suns are kinda defending, but they can't score. Between them, they have 1 win in their last 10 games.

Whoever wins tonight will likely be apparent in the field goal percentages.

One could call this section "Where are they now?" While former Sun Steve Nash has barely played this season due to injury, two of last year's worst-in-franchise-history Suns are in the starting lineup for the Los Angeles Lakers this season as they march toward a worst-in-decades finish in LaLa Land. Apparently, Wes Johnson and Kendall Marshall are the key to a high draft pick.

One year ago, three major players in the Suns rotation represented former backups to each of the Lakers Hall of Fame starters: Goran Dragic -- Steve Nash, Kobe Bryant -- Shannon Brown, Marcin Gortat -- Dwight Howard. A year later, only one of those six players will see the floor tonight - All Star candidate Goran Dragic. Gortat is in Washington, Howard is in Houston, Brown is out of the league and Bryant and Nash are injured.

Smilin' Wes has somehow started 27 of 37 games this year while shooting a little better but producing less per minute. His per game averages are nearly the same as a year ago on 8 more minutes per contest. But he smiles, doesn't complain and tries hard each night. That counts for something.

Kendall Marshall is quite the story and I'll be one of the first to hope he gets cheered tonight when he returns to Phoenix for the first time since being traded/released just a year after being a lotto pick. Unfortunately, Marshall is more likely to be booed for association to last year's team or just simply ignored.

The 22-year old Marshall has found a resurgence in LA since being signed to a 10-day contract a couple of weeks ago. Not only has he been a good passer for the Lake Show, he has showed he can score as well. In 6 starts, Marshall is averaging 13 points, 12 assists and 5 rebounds per game. On the surface, quite excellent numbers, especially for a second-year player.

However, the Lakers have not gotten the results - losing their last five games by an average of 17.8 points a night by surrendering 117 points per game since Marshall joined the starting lineup.

Opponents against the Lakers in January are making 49% of their shots on 28 assists, along with 49 rebounds and 11.7 steals per game, making the Lakers appear to be the Washington Generals of the NBA.

Of course, the Lakers have been injured like few teams can boast this season. Not only are they missing their HoF back court, but Marshall is quite literally their 5th point guard on the season. Jordan Framar, Xavier Henry and Steve Blake are all injured as well. They even tried Jodie Meeks at PG before slotting Marshall in there.

Pau Gasol has been up and down this season as he declines with wear and tear, but put up 20 and 12 last night while nursing a toe injury.

The Suns, of course, are struggling right now. While the Lakers have a 5-game losing streak, the Suns are only one game better (1-4). The league's worst passing team for the entire season is coming off a road trip in which they made only 39.5% of their shots.

I wrote before the road trip that Markieff Morris was the key to the Suns hopes.

More often than not, there's one player in every team's rotation that indicates wins vs losses because of their inconsistency. In the Phoenix Suns case, that player has so far been backup power forward Markieff Morris.

Well, he laid an egg out there. A 12/6 player off the bench all season, and once the Western Conference Player of the Week, Markieff probably wished the road trip never happened. He halved his season numbers, putting up only 6 points and 3 rebounds a game, missing 32 of 45 shots.

The difference between winning and losing is quite tenuous for this team. There's no 'roll the ball out there and win' with a lineup boasting no All-Stars. If any one player goes through a lull, the whole team will.

Of course, it also hurts that Gerald Green forgot his jumper in Phoenix, as did the rest of the team. Hopefully, they will find those shooting strokes back in the Valley.

What did go right for the Suns was Leandro Barbosa. After shooting terribly in his first few games, he was the catalyst for the 4th quarter comeback against the Knicks on Monday night, putting up 21 points, though he may have injured something because he sat out the overtime. 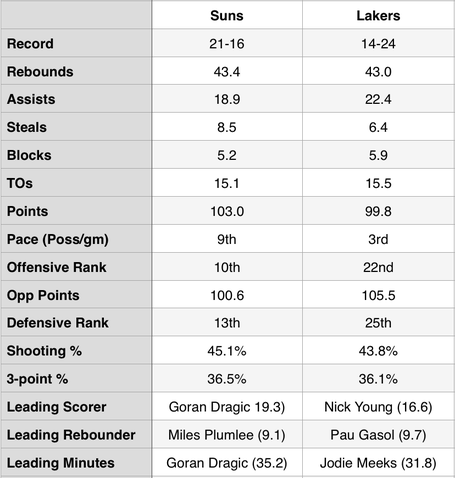 The key matchup is Suns castoff Kendall Marshall against Suns darling Goran Dragic. After being drafted 13th overall just last year as a 20 year old pass-first point guard, Marshall saw the Suns sign Goran Dragic, draft combo guard Archie Goodwin, and trade for Eric Bledsoe and Ish Smith to play ahead of him in the rotation.

Now Marshall gets a chance to show Phoenicians why he was a lotto pick. While still being paid $2 million this season (by Washington, since the trade), Marshall is running a high-octane offense the way he always envisioned when he came into the league. He always said he didn't have to change his shot (he still shoots from the hip, literally) and didn't need elite athleticism to succeed in the NBA. All he needed was his smarts and passing. In LA, he's proving that's true, as long as you're okay with losing games due to low shooting percentages (shooting 40% over last 5 games) and poor defense.

Goran Dragic, on the other hand, has also improved his game and is trying to make his first All-Star game this year, a 20 point scorer in the absence of Eric Bledsoe, along with 7 assists per game.

The safest prediction is that Leandro Barbosa will get the longest, loudest ovation of the night. Hopefully, the Suns have put together a welcome back montage for fans to cheer over.

Regarding the game, Daniel Buerge of LakerNation.com and I exchanged some thoughts:

Why the Lakers will win

Dave King: Why, Kendall Marshall of course. If anyone has a reason to prove to the Suns they can play basketball it's Kendall Marshall. He went through 3 coaches in the span of 10 months and couldn't get a foothold with any of them. Most recently, he couldn't get rookie coach Jeff Hornacek's trust and lost his third-PG spot to Ish Smith who can't shoot either. That the Suns were clearly going as young as possible this season and still didn't have room for a 22 year old PG is a troubling sign. Ish won his coach over with speed, fire and humility that seemed to be lacking from Marshall. Still, Marshall had his supporters who focused on his ability to set up teammates for good shots while ignoring Marshall's inability to make defenses focus on him or play his own defense on the other end. I was one of those supporters until he "lost" his third coach in just over a year. If the Lakers win on Wednesday night, it's because Kendall Marshall showed he's a really, really good NBA point guard.

Daniel Buerge, LakerNation.com: The Lakers will win if they can limit turnovers. The team has been turning it over at an astonishing 15.4 turnovers per game, which is 27th in the league. Their turnovers lead to transition opportunities for the other teams, and that kills the Lakers defensively. If they turn it over, they're dead. If they control the ball, they have a chance.

Why the Suns will win

DK: The Suns will be itching for a win of any kind, and will likely play as if their lives depended on it. The road is a terrible place for an inexperienced team to regain its footing, so a home game after a two-week roadie against a defensively-struggling rival is a great place to start. Still, the Suns will have to play their very best basketball to win the game.

DB: Phoenix will win if they're able to get out in transition. That's a result of the Lakers' turnovers, obviously, but it goes beyond that. Transition options for Phoenix also likely means a lot of missed shots from Los Angeles, especially missed outside shots. So if Phoenix is out and running it means the Lakers are either giving up the rock or missing shots - two recipes for losing.

Hit up LakerNation.com for all your Laker coverage, and follow Daniel on twitter: https://twitter.com/danielbuergeLA during the game for the Laker side of things.