Leandro Barbosa is back. What is he going to bring to the Suns in his second stint in the Valley of the Sun?

When the Suns announced the return of Leandro Barbosa, I think the general response from Suns fans was excitement but tempered expectations. Barbosa is a 31-year-old guard who relies on speed and was coming off of a torn ACL. Two weeks ago he was playing in Brazil. How much could he possibly have left?

Well, three games into his second stint with the Suns, the answer appears to be plenty. From the first moment he checked in against Minnesota, he looked like the Brazilian Blur we all knew and loved. He only made one of his six shots, but he got to the rim at will and looked just as fast as ever. Game number two was more of the same as he shot 2-of-7 for four points. The third game continued the upwards trend, as Barbosa scored nine points on 3-of-9 shooting.

Then came the game against the New York Knicks. Layups went in, jump shots fell and Barbosa exploded for 21 points on 8-15 shooting.

The fourth quarter alone, in which Barbosa scored 14 of his points, showed what Barbosa can bring to the team and why the Suns might be able to hold on and tread water while Eric Bledsoe recovers.

His first bucket came almost two minutes into the period out of a simple pick-and-roll set with Marcus Morris. 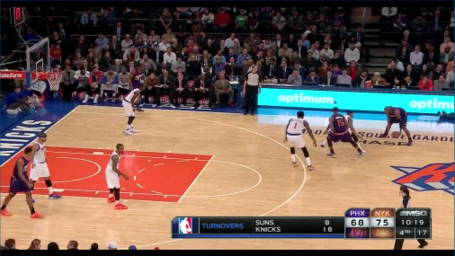 Mook sets the high screen and Barbosa uses it. Stoudemire hangs back instead of hedging while Toure' Murry goes under the screen. 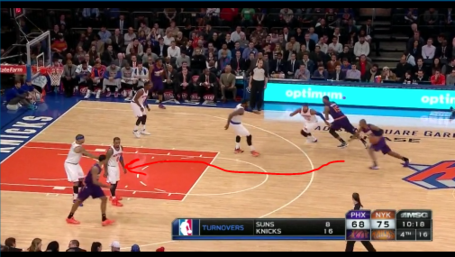 As I have pointed out with the red arrow, this gives Barbosa a wide open lane to the basket. 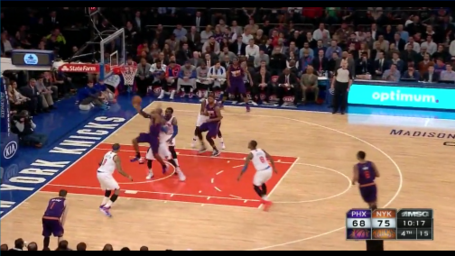 Barbosa's speed and long arms (plus Stoudemire not even attempting to help) allows Barbosa to get to the basket and finish.

The next possession was more of a pseudo-pick-and-roll as Keef runs down the court and just kind of keeps going. Felton gets stuck behind him. 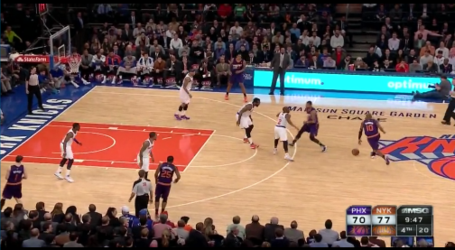 Barbosa takes a dribble right, then comes back left as Keef shifts a little bit (this could have easily been called  a moving screen, but no whistle so it's good!). 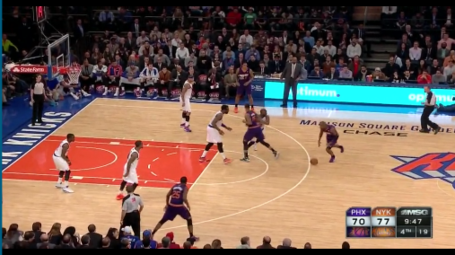 Instead of coming off the "screen" going 100 miles an hour, Barbosa slow plays it a bit. 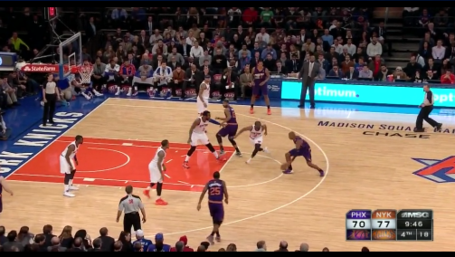 It's tough to show in pictures, but Barbosa actually hesitates here as Felton is trying to get back to him. 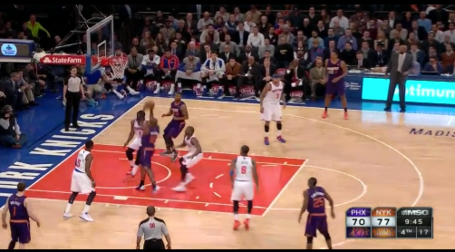 The hesitation freezes Felton and allows Barbosa to blow right past him. Amar'e Stoudemire is waiting for him at the rim ... 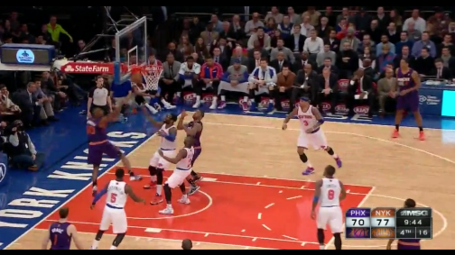 So Barbosa elevates and adjusts in the air for a tough finish (not that Stoudemire bothered to leave his feet to contest it).

Barbosa's next bucket starts with a pick-and-roll, which New York switches. 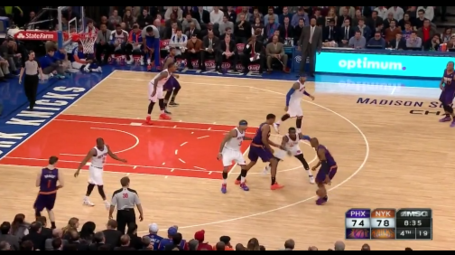 Frye initially looks for a post-up but then decides to clear out along with everyone else, giving Barbosa space to isolate on Kenyon Martin. 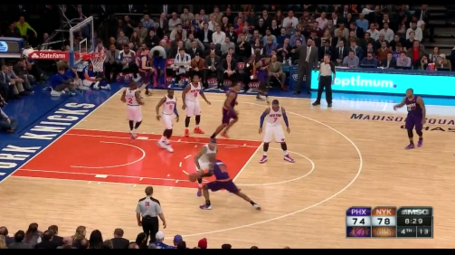 Barbosa uses his quick first step and long strides to attack Martin and get to the rack. 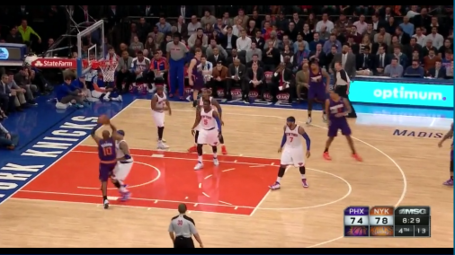 Martin actually does a decent job of staying with Barbosa, but LB rises up and banks home the runner anyway. Pretty good defense forcing a tough shot, but it still went in.

Leandro also helped Martin up after they both fell down on the play. What a nice guy.

Barbosa's next basket began with an offensive rebound as Green overshot his mark and the ball bounced out towards the corner. 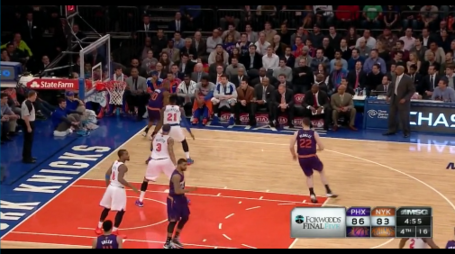 Plumlee sets a screen for him to get the ball out of the corner, but both defenders stay under the screen 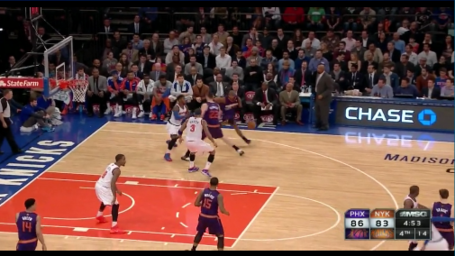 Barbosa realizes nobody is guarding him, so ... 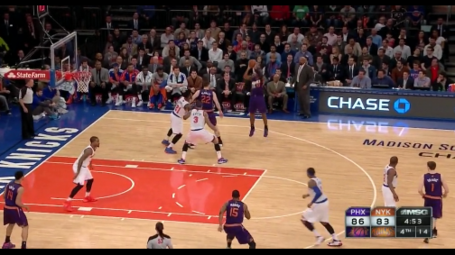 He rises up and knocks down a wide open jumper. Barbosa is a career 39 percent 3-point shooter, and while he has shot very well so far with the Suns, the jumper should come around sooner rather than later.

Finally, this last bucket was another pick-and-roll into an isolation. Inititially, Miles Plumlee (who was being guarded by Kenyon Martin) looked to come set the screen after Dragic handed it off to Barbosa, but LB waved him away. 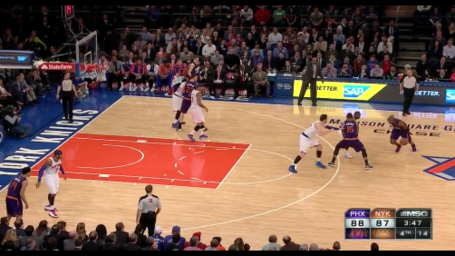 LB looks to shake free from Felton, but Felton stays in front of him and he decides to use Mook's screen instead. 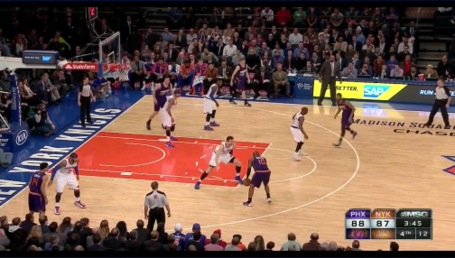 Barbosa gets the switch he wanted again, and isolates on Andrea Bargnani. 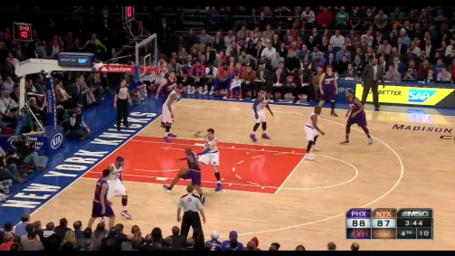 Bargnani has no chance, and Barbosa blows right past him... 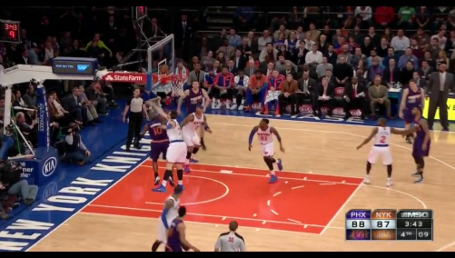 Then uses his body to give himself enough space to finish off the glass.

These are just five of Barbosa's made shots and 10 of his 21 points. He also had a couple 3-point plays and drew fouls on two other plays. He still missed a couple jumpers and a few shots around the basket, but that's who he is.

Unfortunately, Barbosa injured his shoulder late and the Suns fell in overtime with him on the bench (there may be a correlation there). He also missed the game against the Los Angeles Lakers, which the Suns managed to win with a huge game from Gerald Green. However, Green isn't going to be that hot every game and the Suns are going to need Barbosa moving forward.

As demonstrated by these plays I've shown you, Barbosa brings something to the table that none of the team's guards other than Dragic can really do: create off the dribble. Barbosa still doesn't know the full offense, but he's more than capable of running the pick-and-roll or isolating if he has a mismatch. The speed we all remembered is still there. He's never going to be the Sixth Man of the Year LB again, but he still can contribute and help this team win games. He's comfortable with the team and Goran Dragic is comfortable with him (as is Channing Frye).

"@JacobPadilla_: @Channing_Frye What is it like having Goran and LB back running with you again?"- awesome i love playing with both of them

Barbosa was signed on Jan. 8, meaning his 10-day contract is up in two days. However, expect to see Barbosa in the Valley of the Sun for much longer than that. Per ArizonaSports.com, we haven't yet seen the best of the Blur.

Hornacek believes Barbosa, who had been out of the NBA since tearing his left ACL in a game last February, will continue to get better as he gets re-acclimated to the game and learns his new teammates.

"We get a couple days to practice our plays with him and I think he'll be a good addition for us."

"He's a veteran guy," the coach said. "If we're going to try to make a push for the playoffs you'll need that veteran guy whether Eric comes back in two weeks or five weeks or whenever it is.

"Leandro, once Eric gets back, will be just another good piece to bring off the bench and bring veteran play."