A look at how Goran Dragic has compensated during the last eight games the Suns have been without Eric Bledsoe.

We have seen eight consecutive games with Phoenix Suns guard Goran Dragic having to play without his running partner Eric Bledsoe.  As expected Dragic has taken on a larger role, which is shown by the jump in time on the court and his increased usage rate.

Goran's minutes have spiked to 37 per game in January from 33.5 in November and 35.8 in December.

His USG Rate in the first two months was 23.7 and through eight games this month is 25.5.

"My body is not the same," said Dragic after practice on Thursday.  "I feel tired a little bit, but I try to do whatever it takes to recover my body.  When it's the game even if I'm tired I try to not think about because I think that's mentally a lot and if you think about it you're not going to perform well."

Throughout the course of NBA games players find different situations where they are able to pace themselves.  Warriors guard Stephen Curry will go into a corner on possessions and let Andre Iguodala, Harrison Barnes, Klay Thompson or David Lee run the offense.  Dragic ‘s ability to take advantage of those pockets of time has dwindled.

"It's a little bit tougher because I'm the only guy handling the ball," said the Suns hopeful All Star guard.  "We got LB now and he can do a little bit of this stuff, but he's hurt. With Eric sometimes he plays pick and roll, sometimes I play pick and roll, and its much easier because I'm not getting tired so much. Off the ball I'm just spotting up and he's hitting me -- if I'm open I'm gonna shoot it and if I'm not I'm gonna penetrate."

To illustrate the point Dragic made, he has hit 15 corner threes on the season, seven of those have come off Bledsoe assists.  Bledsoe has also assisted on 31% of Dragic's 29 assisted buckets in the restricted area.

The biggest difference for Dragic thus far has been how teams are defending him in the pick and roll.

"I would say in pick and rolls everyone is getting inside the lane more," said Dragic.  "There's not a lot of space to have an open lane for lay ups or to try and find open shooters.  It's a different situation, but somehow we can manage it."

Here's a comparison of where Dragic was taking shots before and after the Bledsoe injury:

Dragic's three-point shooting has been a big reason the Suns offense has been able to stay at the level it has during this difficult time.  Despite the increase in attempts he's knocking down 45.9% from behind the arc and 46.7% of the 30 above the break attempts.

14 of those 30 attempts were with Dragic as the ball handler in the PnR. Here are three screen shots showing how defenses are closing off the lane and forcing him to pull up instead of attack the rim: 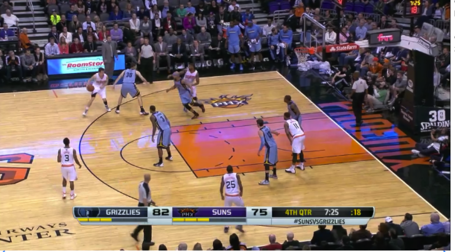 Jerryd Bayless went under the screen and Jon Leuer showed. James Johnson is content leaving Ish Smith and Mike Miller is prepared to rotate down to Markieff Morris, as Zach Randolph's responsibility is to close off the lane. 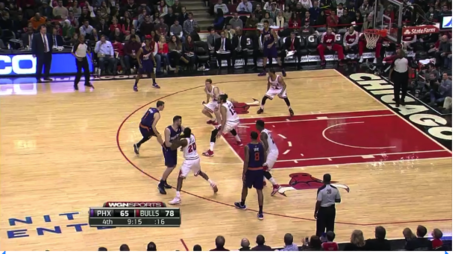 Dragic tried to turn the corner around a Miles Plumlee screen and he didn't have a chance. Chicago's entire defense collapsed on him with Noah switching off and Mike Dunleavy leaving the wing to help out.  D.J. Augustin puts himself in a position to be able to rotate to the wing or back to the corner along with another body to support in case Dragic pulls a magical move and splits the two defenders.  This is the type of team defense you expect from a Tom Thibodeau coached squad.

Josh Smith has two feet in the paint just below the foul line and Drummond has one foot in the paint near the restricted area. Even if Dragic is able to penetrate the first line of defense there's no way for him to get a good look anywhere near the rim.

This leads to contested three point shots.  Luckily for the Suns, Dragic is good enough to knock down these type of looks and keep the offense afloat.

If his three-point percentage takes a dip, Phoenix could be looking at even more offensive struggles than the one point drop they've seen to its offensive rating during this eight-game stretch.