Reportedly, the Phoenix Suns are going to wear their new sleeved jerseys on Friday night against the Dallas Mavericks.

The Phoenix Suns are coming off a hard fought (get it?) and much needed win over the struggling Los Angeles Lakers, while the Dallas Mavericks are reeling from allowing a big comeback win to the Clippers in which the Mavs scored 127 points but lost. Yet, otherwise, the teams are recently heading in different directions.

But the side story of tonight's game is the one year anniversary of a very dark night in the Valley of the Sun.

After the loss to the Suns on December 21, the Mavericks were a dismal 4-9 on the road to mar an otherwise good record. The Suns had their best offensive explosion of the season (123 points) according to Hornacek ("The best we can play on offense" he said afterward).

After that, though, the Mavericks flipped their script and won 5 of 6 on the road, including wins over the Rockets, Bulls, Wolves, Wizards and Pelicans.

The Mavericks lineup is old. Five of their regular rotation players are 32 or older (Calderon, Dalembert, Nowitzki, Marion, Carter) while the Suns don't have a single active player (not counting Okafor) over 30.

Much like the Suns, the Mavericks have a great 1-2 punch at the top of their lineup - Nowitzki and Ellis - with everyone else taking turns being the third scorer.

Important things about the Mavericks that might scare you in advance of tonight's game:

Apparently the Suns are wearing the orange sleeved jerseys on Friday night. All I have in orange are Bledsoe (out) and Caron Butler (traded).

The biggest thing about this game is that it's the one year anniversary of Alvin Gentry's last game coaching the Phoenix Suns. The Suns lost to the Milwaukee Bucks at home in a terrible loss to a terrible team that left the locker room a ghost town of the walking dead. 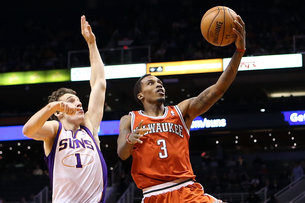 The loss dropped the Suns to 13-28, the 41st game being a perfect opportunity for clear before/after picture for whoever Hunter to replace Gentry for the rest of the season. This was not only the last game coached by Gentry, but also by top assistants Dan Majerle and Elston Turner.

Interestingly, Monta Ellis was a Buck in this game and scored 24 points to help the Bucks hammer the final nail into the Suns' coffin.

After that, the Suns franchise walked the earth without a soul for a few months, but then were reborn like the Phoenix over the summer. 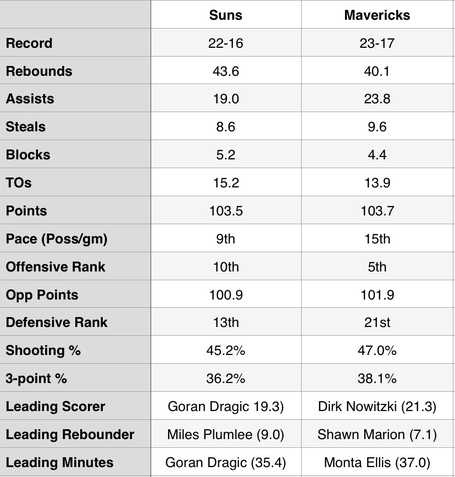 Since the last game against the Suns, the Mavericks have brought Dalembert back into the rotation.

The biggest matchup is anyone trying to cover the unguardable Dirk Nowitzki. That dude is so tall and talented, you might as well call him STAT. Can Channing Frye or Markieff Morris effectively keep Dirk off his game? Or will the extra attention to Dirk leave the lanes open for Ellis drives (leads the league with 10 drives a night) and Marion/Wright/Dalembert/etc feasting on the boards at each end?

I want the Suns to win this game but I think it's really a toss up. The Mavericks have played better on the road lately, but the Suns are feeling good again after a long road trip of their own.

This game will be high-scoring. Here's hoping the Suns score one more point than they do.