Since the Grizzlies crushed the Suns by 19 with a backup front line, the teams have gone in opposite directions. The Suns have risen into clear playoff contention while the Grizzlies have fallen back in what might be a lost season.

Share All sharing options for: Game Preview: Phoenix Suns (19-11) vs. Memphis Grizzlies (13-17) - Slashing back with vengeance

Last time we saw the Memphis Grizzlies, they blasted the Suns by 19 points behind double-doubles from bigs Ed Davis and Kosta Koufos, plus another 23 and 9 from deep backup big man Ed Leuer. Just as starting center Marc Gasol and Zach Randolph missed the game, so did the entire Suns team.

But that may just have been the best game of the season for the Suns because it was served as a wake-up call for the team. Since then, the Suns have won 10 of 12 games and taken over the 5th best record in the Western Conference.

The Grizzlies have won only 4 of 13 games since drumming the Suns, a victim of their poor defense and offense despite getting Zach Randolph back for that entire stretch. On the surface, their defense looks okay (and their offense worse) only because they play at the slowest pace in the league. In terms of points per game, their offense is 26th and defense is 6th. But in terms of points per possession, their offense is better (17th) while the defense suffers (24th).

The defense was better in the first month of the season for Memphis, but has fallen off considerably. Once rated 15th in efficiency when they last faced the Suns, Memphis has dropped to 24th now.

All this has happened despite Zach Randolph in the lineup, supposedly making the Grizzlies much more dangerous than starting Ed Davis.

Randolph, though, has long been a Suns-killer routinely putting up 20+ points and 10+ rebounds - and sometimes doubling those numbers - when he faces the Suns.

Trying to rebuild the home court advantage is going well (though the arena is still 20+% empty). The Suns have won 11 of 15 home games this season, including 6 of their last 7.

The offense has been cruising. After averaging only 96 points per game last year, the Suns are now putting up 103.7 per game for the season and have scored 100+ points in 16 of their last 21 games.

The defense hasn't been bad either, up to 13th overall in defensive efficiency (points per possession) and 11 spots better than tonight's opponent, the Grizzlies. 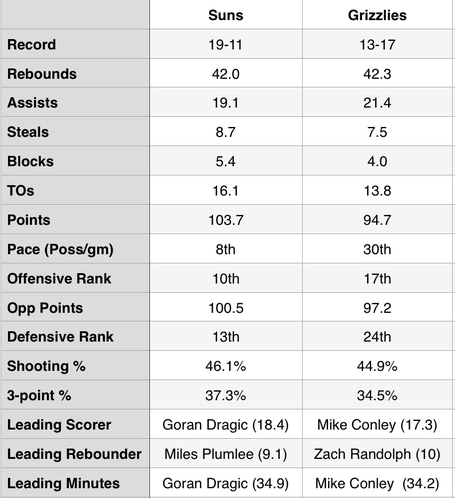 These teams could not be much different. The Grizzlies play at the slowest pace in the league while the Suns play at one of the fastest. The Suns are better on offense and defense alike.

As always, any key matchup in a Suns game is whoever plays against the two point guard tandem of Goran Dragic and Eric Bledsoe.

The last Memphis game, Eric Bledsoe had just returned from that 8-game absence due to a bruised shin. Bledsoe was terrible in that game against Mike Conley, so he will have to be better tonight.

The last two Suns opponents have countered with a two-point guard attack of their own to terrible results. Philadelphia played Tony Wroten alongside Michael Carter-Williams in a 14-point Suns win, while the Clippers tried Darren Collison alongside Chris Paul in a 19-point Suns win. Look for the Grizzlies to try to beat up the Suns guards with Conley and SG Tony Allen, but if that doesn't work well don't be surprised to see Jarryd Bayless out there a lot in Allen's place next to Conley.

In the Suns only two losses in 12 games, to the Spurs and Warriors, Dragic/Bledsoe have been beaten soundly. Once by San Antonio's size and then by Golden State's splash.

This could potentially be a tough matchup for the Suns, despite Memphis' poor season to date.

Memphis can play perimeter D with the best of them between Conley and Allen, which can make life difficult for Bledsoe and Dragic. And then down low, Zach Randolph could go off on the Suns like he always has in the past while the other bigs could easily dominate like they did last month.

It's either going to be a Suns blowout or a low-scoring nail-biter.

I predict the Suns will feel extra focused since that 19-point loss earlier this season, and put a pasting on the Grizz.