The Phoenix Suns play a unique offensive style that the Pacers will have to scheme to stop, but the Pacers have been scheming to stop the entire league this season. These two scrappy teams face off on national TV to see who can win that chess game in the alley.

The trade that shaped the 2013-14 Phoenix Suns comes full circle tonight. Last July, the Indiana Pacers supplied 40% of the Phoenix Suns starting lineup from the end of their bench in exchange for a backup power forward. Somehow, both teams came out better for it.

Gerald Green and Miles Plumlee, neither better than 10th man on the Pacers, are leading a playoff contender in the desert this season. Now they get to show Indiana their talents tonight on ESPN, hoping for a win against their former team.

Big reminder: this game is a 8:30 (or more likely 8:45) Phoenix time, after the early ESPN game finishes.

Only the NBA's best team. The Indiana Pacers are a cool 33-7 this season, sporting 10 more wins than the Suns over the same 40 games. They outscore their opposition by nearly 10 points per game.

The Pacers best attribute by far is their defense, leading the NBA in fewest points allowed per possession by a wide margin: 92.8 points per 100 possessions. They are second in overall rebound rate (percentage of rebounds grabbed per opportunity), gobbling up 52.7 of all available rebounds. On the defensive end, they pull down 76.9% of all opponent misses, by far the best in the league. Once you miss, your chances are over.

On the perimeter, they give up the second fewest 3-point attempts in the league, and that's the good news for Suns fans. Worse news is that they're first in 3s allowed, and first in 3-pt field goal percentage allowed. In case that was too much math, that's saying the Suns won't get off many 3s.

The play at a very slow pace, so the Suns will be hard-pressed to get out and run. This game might resemble those east-coast road games, except the opponent is a lot better.

Areas in which the Pacers are #1 in the league:

Chinks in the armor? Well, their own offense is only 16th in the league, and their offensive rebound rate is just 20th overall (both worse than the Suns). Their true shooting percentage is basically even with the Suns at 54.6%, which gives credit to 3-point shooting.

For the season, the Suns have been able to boast a +3.2 scoring advantage every game due to their shooting at the three-point line. On average, the Suns score 28.3 points per game on 26 3PA, while the opposition only gets 25 points on their 26 shots in response (19 3PA + seven 2PA - because it's not like it's 3-or-bust on the other end).

That basically means that the Suns stake themselves to a three-point win just on their frequency of hoisting threes, if all else were equal.

Against the Pacers, the Suns will have to manufacture that +3 (or more) to have a fighting chance. The Pacers are #1 in the league in allowing fewer than 18 three-point attempts per game - fewest in the league.

At whatever total attempts, the Suns must find a away to make three more 3s than the Pacers to maintain that advantage. With the Pacers being the league's best defensive rebounding team, the Suns cannot expect to make up that difference on hustle and second-chance points. 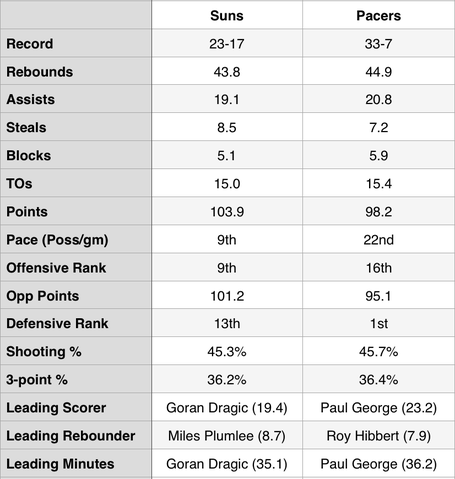 There's great matchups all over the court...for the Pacers. While Goran Dragic should be able to outplay George Hill, the other Pacer starters are very likely to outplay the Suns starters. 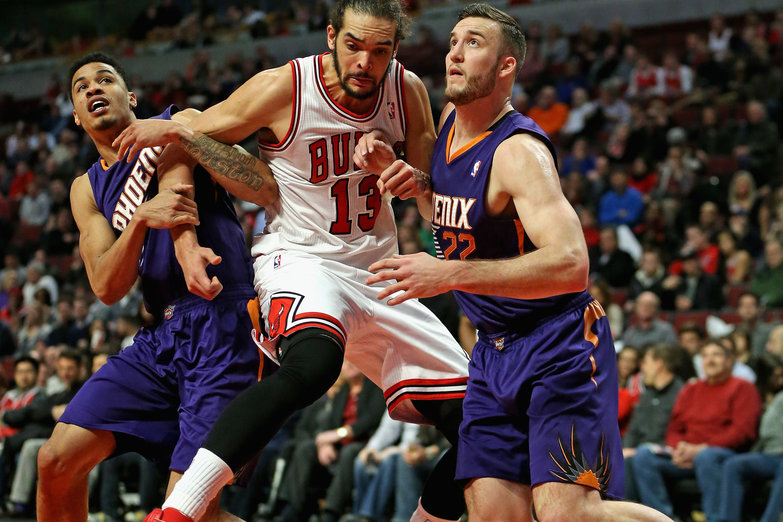 Please do not expect Miles Plumlee to outplay Roy Hibbert. While Plumlee might get his jump back, thanks to the nervous energy of playing his former team, he will likely overshoot his shots and commit dumb fouls as well.

Also, do not expect Alex Len to look very good in this game if he's matched on Hibbert. Hibbert is a max-contract center, the best defensive center in the entire game. Neither Plumlee nor Len have the experience to show up and play Hibbert to a stand still. Sure, Alex Len showed flashes on Sunday night of a very bright future, but his game will be inconsistent all season.

Most likely, Hornacek will recognize this and play most of the second half in a small ball lineup to try to force Hibbert off the court. Hibbert cannot hang on the perimeter, so sticking him on Frye or Morris would negate a lot of his defensive value because he will be 15 feet from the basket when Dragic or Barbosa start their drive.

If the Suns can negate Hibbert with small ball, and they make a normal % on threes, then they can steal this game from the Pacers.

But the Pacers are the league's best team, boasting a stifling defense that brings offenses to their knees. Unfortunately, the Suns have poor offensive execution outside of fast breaks and drive-and-finish-or-kick, feeding into the Pacers hands.

I'd love to predict a win, but I can't in good conscience: 100-95 Pacers win. (you could consider it a small victory, in that the Suns are very likely to keep this game close. If you're into that sort of thing.)