Remember all that talk about small sample size at the beginning of the season when the Phoenix Suns were just a cute tanking team that forgot tank? Well, the sample has grown and the results are impressive. Here are some takeaways.

Share All sharing options for: Phact and Phiction: The 2013-14 Phoenix Suns' Growth from 4 Games to 40

Tonight's game against the Indiana Pacers will mark the halfway point of the Phoenix Suns' season. Remember all that talk about small sample size at the beginning of the season when the Suns were just a cute tanking team that forgot to tank? Well, the sample has grown and the results are impressive. Here are some takeaways.

PHACT: Eric Bledsoe and Goran Dragić are an amazing backcourt tandem. Dave went into the offensive creation numbers here. But with both players averaging 18 points and 6 assists together, they proved the experiment worked. Here's hoping we get more of the same when Bledsoe's knee heals.

PHICTION: The Suns are an elite defensive team. After starting the season playing lockdown top 5 defense, the Suns have drifted back towards the middle of the pack, with a just-barely-above-average Defensive Rating of 105.9. But they're 11th in opponent field goal percentage, allowing a respectable 44.9%. No slouches, but not the shutdown D of early in the season. 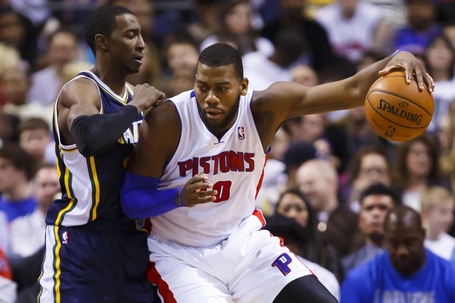 Get news, links and Ziller's #hottakes in your inbox every weekday morning. Inside the first issue: Will the Pistons be big movers on the trade market, and what does the future hold for Rajon Rondo?

PHACT: Miles Plumlee is a legit NBA center. After trading away arguably the best Suns center this side of Shaquille O'Neal, there were questions about how gooey the Suns middle would be with rookie Alex Len sidelined with surgery. Frequent Flier Miles answered with an 18 point, 15 rebound debut against the Trailblazers. While he hasn't maintained those numbers, 9.6 points, 8.7 rebounds and 1.7 blocks per game are more than Suns fans could have hoped for. (Corollary fact: The Suns fleeced the Pacers.)

PHICTION: Channing Frye lost his shooting touch. Frye got off to a rough start, going 11 of 38 (28.9%) from long range in his first 10 games. Since then, he's been a blazing 44.1%. Even with the poor start, he's having his second best season in terms of 3PT% and points per game (12.4) of his career. Coming off a career-threatening heart problem, it's been a great comeback story inside the Suns' own comeback story.

PHACT: Kendall Marshall is a legit NBA point guard. Yeah, this is only tangentially related to the Suns, but credit where it's due. He's averaging 12 points and 11.8 assists per game and shooting a Channing Frye-like 44.7% from 3-point range (but a pedestrian 42.6% overall) on a putrid Lakers squad. The fact that he's getting 12 assists per game on a team that ranks 20th in field goal percentage is a testament to his ability to set guys up for easy buckets. (Still don't miss him.)

PHICTION: The rebuilding process is going to take 2-3 seasons. Welp, that was quick. The Suns are 2 games off their win total from all of last season. Winning 50 games and a playoff berth are completely in play if the team can hold its own until getting it's other star point guard back. The bar has been reset from lotto pick to future ‘ship in a few short months.

PHACT: Jeff Hornacek is a wizard. OK, maybe not The Wizard from Wallace and Ladmo, but way back in August, he stated goals of having players take more efficient shots and scoring over 102.9 points per game. As it stands, the Suns are scoring 103.9 points per game and taking 30.6% of their shots from 3-point range and another 46.8% in the paint. Less than 1 in 4 of their shots are from the dreaded "long 2" part of the court.

Yes, the Eric Bledsoe injury has put a damper on expectation of late. The wheels could still come off this almost-Cinderella season. But halfway through this NBA season, the Phoenix Suns have given fans way more to celebrate than denigrate. That's a welcome change from the sample size of the 2012-13 season.

Got your own Phoenix Suns Facts and Fictions, or other tales of an expanding sample size? Share them in the comments! (And apologies to Jacob Padilla for jacking his phunny way of spelling philm.)