The Phoenix Suns try to complete their homestand with a 4-1 record tonight against the Washington Wizards (20-21). If the Suns win tonight, their 25-17 record would match their most games over .500 since 2010.

Over the past nine days, four former Suns (three from last season alone) have brought new teams into US Airways Center. Tonight, it is Marcin Gortat's turn to try to beat the Suns as a starter for a new team - the Washington Wizards.

Homecoming week continues. Last game, it was Luis Scola returning to the valley after a forgettable year got him traded to the best team in the league. Last week, it was Kendall Marshall leading the Lakers into town. And then Shawn Marion came in with the Mavericks.

Now former Suns center Marcin Gortat returns to US Airways Center for a taste of Orange Crush. I know, that's not a regular nickname but it fits after the Pacers game, and the Suns are wearing those orange jerseys again tonight (reportedly). So, Orange Crush is the nickname of the day.

Anyhoo, back to the Polish Gazelle. His production for the Wizards is almost identical to last year. He plays 2 more minutes per game for Washington (32) than last season, and puts up 12 points and just under 9 rebounds in those minutes. Defensively, he's done well defending the rim (though not as well as Plumlee), surrendering 50% field goal shooting, which is better than league average in that area.

The Wizards best player, of course, is John Wall. Wall's shooting percentages are low (42% from the field, 31% on threes), but he scores at will. He takes nearly 6 free throws a game and total 20 points and 8.5 assists in 37 minutes a night. And Wall is still just 23 years old.

The Wizards second best player is 20-year old Bradley Beal, who makes 43% of his threes and scores 17 points a game. Factor in Nene, a resurgent Trevor Ariza and the Hammer, and you'd think the Wizards are pretty darn good.

Except, they're just barely okay. Their bench is awful, and their offensive schemes leave a lot to be desired.

"I don't like the position I play," Gortat said after scoring just six points on 3-of-10 shooting in the Wizards' 113-96 loss on Saturday at Verizon Center. "I'm constantly drifting more and more away from the basket. That's not my game. I'm capable of making one or two plays like that away from the basket, but I feel more comfortable underneath the basket."

Nearly 37 percent (84 of 228) of Gortat's shots this season have come outside the paint, which is much higher than his previous two seasons in Phoenix.

"I just think I have to talk to Coach and clear things up and make sure we are on the same page," Gortat said.

Where have we heard this stuff before, calling out the scheme to the media?

Let's stay with the Gortat theme. This and later quotes from the Washington Post today:

Even as Gortat makes his return to US Airways Center on Friday, the Suns continue to appease the scruffy-bearded, 6-foot-11 big man from Poland. The Suns had scheduled a Polish heritage night for their first home game, but Gortat was already elsewhere for the festivities. Phoenix will honor the tickets of fans who paid to see Gortat play by allowing them to use those tickets to see the Wizards.

Good for the Suns, honoring those tickets. And, while it seems crass, good for the Suns to pull the trigger on a necessary trade despite having spent time and effort to set up that Polish Heritage night in the first place.

Gortat is certainly grateful for the kindness but he is also a competitor, so he has no plans of going over to the weight room to hang out with his old teammates, coaches and trainers. He expects to sit in that visitors' locker room with his Wizards teammates, focusing on what he most wants during his reunion.

This one I highly, highly doubt. Gortat won't be able to contain himself this afternoon. He's just too gregarious, and too good at laughing himself off. So while he talks a good "mean guy" game, I fully expect to see him ambling down the hallway when reporters are on the loose, cracking jokes and making fun of himself and others in a light-hearted way. That's just Marcin's style.

"There will be some emotions, for sure. I will have some emotions. I've been there for three years and I ain't going to lie," Gortat said. 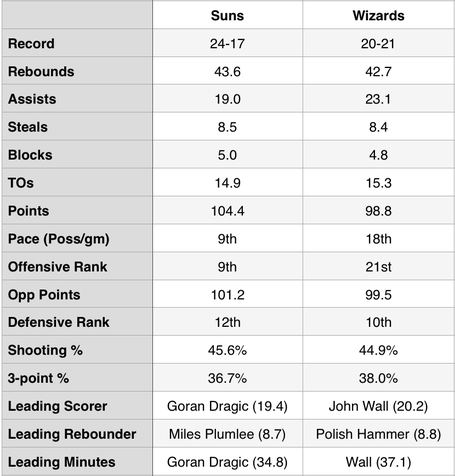 While the real key to the game is Goran Dragic and Gerald Green against John Wall and Bradley Beal, it's more fun to talk about something else.

How about the matchup of the new center Miles Plumlee (and rookie Alex Len) vs. their old center Marcin Gortat. Now that's funner.

Marcin Gortat would love nothing better than to score 20 points and pull down 20 rebounds tonight, to lead his team to victory over the franchise that traded him away. Miles Plumlee and Alex Len, who won the "fight for bread and water" in September, would like nothing more than to outplay Gortat in their first matchup since the trade.

Marcin has promised to play great against former teams/opponents before, but has not consistently delivered. Yet the tipping point on this game is how great John Wall plays vs. the Suns guards. If Wall dominates and the the Wizards supporting cast supports him, then the Wizards can win.

Most likely, though, the Suns win this game by 10+ points.