Share All sharing options for: Is Markieff Morris the Phoenix Suns' Barometer?

A few years ago, a buddy of mine nicknamed Jason Richardson "The Barometer", because the Suns were undefeated every time he scored at least 20 points or something like that. Last season, there wasn't a barometer: the weather always sucked and if the Suns took the court, losing was generally in the forecast. This season however, the winds of fortune are favoring the Purple Gang and the key to their success might surprise you.

In looking at the statistical splits for all of Phoenix's players between wins and losses, most of the Suns are remarkably consistent. Within a couple of points, the scoring doesn't fluctuate too much and neither do many of their other statistics. This is a remarkably balanced and surprisingly consistent squad offensively. With of course, one notable exception.

Ladies and gentlemen, your barometer for the 2013-14 Phoenix Suns... Markieff Morris!

The difference between his numbers in wins and losses is staggering when compared to the rest of the team. It's almost as if the Suns' offense goes as Keef's offense goes. That six points per game differential is huge for a team that averages a 3.3 points more than their opponents on a nightly basis.

That Markieff is a key component of the Suns' success or failure is not a huge surprise given that he's their sixth man. The big surprise for me was discovering exactly how much of an impact his play differs in wins and losses. It makes a little more sense when you consider that in addition to being 6th on the team in minutes, he's 4th in field goal attempts. So when his shooting drops off as much as it does, from .536 to .390, that's a lot of lost points. With Eric Bledsoe sidelined, it would seem a large share of his offensive load has been thrown Keef's way. But it isn't even the amount of the Suns offense he accounts for that's most amazing... it's how he does it. 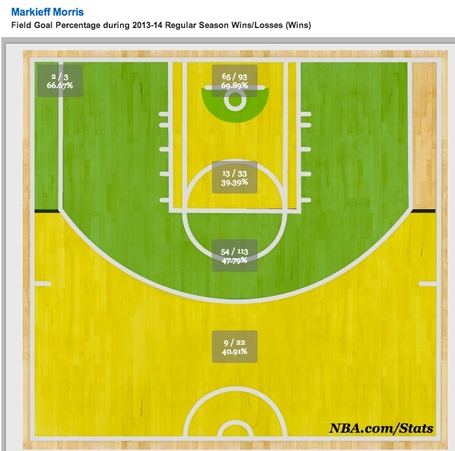 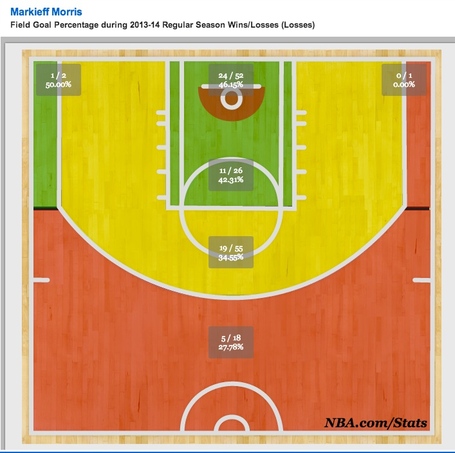 Those are Morris's shot charts in wins and losses. On the one hand, it's no shocker that he shoots worse from 3 point range in losses. What is astounding is that in Suns' wins, Markieff takes twice as many dreaded "long 2s", the least efficient shot in the NBA. And then makes them at the ridiculous clip of 47.8%! He's also far more successful at the rim in those games, making almost 70% of his shots there as opposed to a paltry 46% in losses. You read that right. When Keef is on, he's a better shooter from the mid-range than he is at the rim.

It's fun to throw out the Melo Morris jokes in game threads, but it turns out there's a grain of truth behind that silliness. When Morris goes into Melo mode, he's actually a more effective player. I haven't watched enough of his footage (paging Jacob Padilla!) to figure out if the inside game gets his outside shot going or if a couple of exterior makes gives him room to drive, but it bears watching going forward this season.

I don't have a magic barometric number for Markieff's success like we did for Richardson's 20 points per game. But I think it's safe to say that if you see a few of those midrange jumpers drop for Keef, it's a good bet the Suns will be shining at the end of the game.