Assist to turnover ratio: Are the Phoenix Suns sloppy and selfish?

Most people familiar with the Suns would use the words cohesion and camaraderie to describe the team rather than the scathing adjectives in the title... but then why is the team dead last in the NBA in assist to turnover ratio?

Share All sharing options for: Assist to turnover ratio: Are the Phoenix Suns sloppy and selfish?

The Suns' struggles to rebound the ball and end defensive possessions have already been detailed recently.  Phoenix "boasts" the league's 28th ranked defensive rebounding % (72.1%) and is fourth worst in offensive rebounds allowed per game (12.4).  This deficiency has led to a weakening of a still respectable 14th ranked defense (DRtg - 104.8).

There are other areas that plague this team as well.

The Suns lack a playmaker outside of Goran Dragic and Eric Bledsoe.  Though not prolific distributors, Jared Dudley and Luis Scola at least helped the ball move in halfcourt sets last season. There has been a heinous amount of ball-stopping on the team this year. Besides Dragic and Bledsoe nobody on this team averages more assists (1.8) than Shannon Brown did last season.  Yes, the Cannon would be third on this team in assists. The lack of facilitating outside of the two combo guards can be punctuated by the unsettling statistic that Gerald Green, whose career average is less than one assist per game, is fourth on the team in assist %.

The Suns are the only team in the NBA with only two players averaging over 1.8 assists per game.

Combine those two sets of statistics and it should be little surprise that the team is 29th (1.19) in assist to turnover ratio.  This is by far the team's worst ratio in the past 10 years. 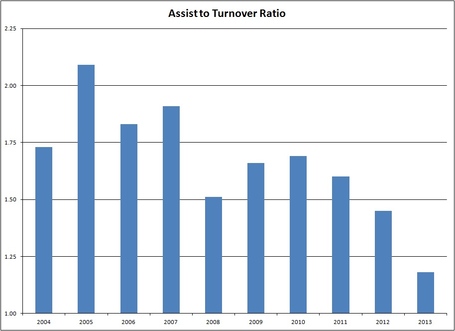 The Suns have returned to a more exciting brand of basketball, with a comfortable lead in fast break points per game (19.4 compared to second place OKC at 17.3), much like the 7SOL days where the Suns finished in the top four in fastbreak points for five consecutive seasons.

These characteristics make the Suns a threat in any game, no matter the deficit, as they can pull off a huge run at any given moment.  Just look at last night's 18-0 run against the Memphis Grizzlies.

But there is a way this team is going about scoring (and playing) that is a departure from the past decade - mostly orchestrated by disseminating virtuoso Steve Nash.  The Suns assist to turnover ratio is just terrible.  They are almost doing a better job of sharing the ball with the other team than they are with themselves. 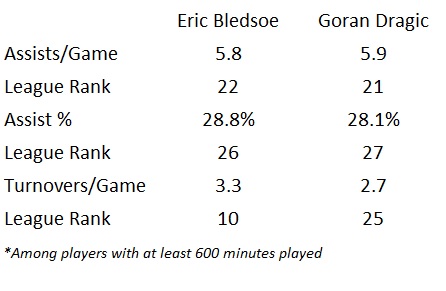 The Suns two point guard (combo guard) philosophy doesn't appear to be hurting in terms of creating for others from thebackcourt positions.  Besides Phoenix there are only three other teams with two players averaging at least five assists per game... Golden St. - Stephen Curry (9.6) and Andre Iguodala (5.0), Miami - LeBron James (6.6) and Mario Chalmers (5.2), and Portland - Damian Lillard (6.0) and Nicolas Batum (5.3).

However, both Bledsoe and Dragic are turning the ball over at a high rate.  They account for six of the Suns' 16 turnovers per night.  Still, their combined 1.95 to 1.0 assist to turnover ratio is not terrible.  Of the remaining players, though, only P.J. Tucker and Ish Smith (and Channing Frye by one assist) have more assists than turnovers.

Goran and EB have also missed time this season, taking away one of the team's point guards in ten of 31 games.  But that hasn't changed the bottom line much.  In the three games without Goran the Suns are averaging 20 assists per game.  Without Bledsoe it's been 19.7.  Both are slightly higher than the season average.

What is different is that during the seven games that Bledsoe has missed Goran has averaged 22.2 points and 8.6 assists per game.  That's compared to 17.8 points and 5.0 assists in the 21 games they've played together.  Does Goran feel the need to carry more of the load in the absence of his backcourt mate?  This spike hasn't occurred when Eric has played without Dragic (albeit in a smaller sample size) as his numbers of 18.6 points and 6.3 assists in the three games are nearly identical to his season averages.

After last night's loss the Suns are 3-4 with Dragic and no Bledsoe, 2-1 with Bledsoe and no Dragic, and 14-7 when they both play. 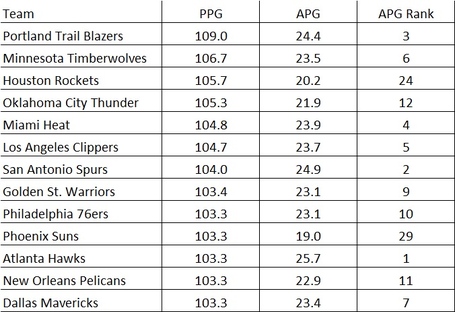 Despite not setting each other up for easy baskets and gifting the ball to the other team the Suns have managed to put numbers up on the scoreboard.  The Suns are in a five way tie for 9th in the league in points per game.  The fast break points and three point field goals definitely help this number.  The Rockets are the only other team that is bottom third in assists per game on this list and they also rank out pretty well in made threes (6th) and fastbreak points (8th).

Rebounding, turnovers, assists... The Suns are a smallish, young team with a turnover prone backcourt and a lack of a tertiary creator.  On the other hand, they also have strengths in quickness, athleticism, shooting and energy.  A flawed but fun team.

Maybe the return of a player like Alex Len or Emeka Okafor can help shore up the rebounding, but that seems unlikely after both player's extended hiatuses and Len's paucity of experience at this level.  The acquisition of a wing who can shoot the three and provide better ball movement in the half court seems a more likely possibility, but this type of move would still have to work both short and long term.

What the Suns really need is a rebounding playmaker, but those are a very rare breed.  Of players averaging at least nine rebounds per game only Kevin Love, DeMarcus Cousins, Blake Griffin, Joakim Noah, Tim Duncan and Pau Gasol average three or more assists per game.  The closest thing the Suns have to this is Markieff Morris who averages 8.7 rebounds and 2.3 assists per 36...

Until the Suns land an All-NBA type of power forward talent they could always check out this link for sharing songs.  I love to be helpful.  Between Jack Johnson and Bert and Elmo I know they can work it out.  Also, maybe start off each practice with this enigmatic riddle:

If you have me you want to share me, if you share me you haven't got me. What am I?

A secret. A basketball.