Markieff Morris has become the barometer of the Phoenix Suns success

More often than not, there's one player in every team's rotation that indicates wins vs losses because of their inconsistency. In the Phoenix Suns case, that player has so far been backup power forward Markieff Morris.

Share All sharing options for: Markieff Morris has become the barometer of the Phoenix Suns success

The Phoenix Suns are surprising the NBA with rolling a playoff caliber team out on the court every night. No longer is the rhetoric about tanking, but rather about playoff positioning and adding to the win totals.

What still confounds the NBA pundits is just HOW the Suns are doing this. They traded most of their best veterans players away, drafted the longest-term prospects possible and fielded a team of end-of-bench warmers on opening night.

With the success of newcomers Miles Plumlee (55 NBA minutes before this season), Eric Bledsoe (20 minutes a night his first 3 NBA seasons), Channing Frye (technically new, after missing a year with a heart ailment) and Gerald Green (out of league for years until 2011), the Suns are setting a new standard for turning one person's trash into their own treasure.

But it's the improvement of a pair of returning twins that has really turned the Suns fortunes for the better. In the third NBA season, Markieff Morris and Marcus Morris are producing career years as role players off the bench with career-high numbers off the bench.

And while their consistency from game to game is still an issue, they have each improved in that area a great deal. The Suns this season are already 20-12 after finishing last season at a dismal 25-57.

Head coach Jeff Hornacek, just like Alvin Gentry and Lindsey Hunter before him, starts every evaluation of the Morris twins with some variation of "When they are engaged..."

Suns fans know this with the eye-ball test. You can tell early on whether the Morris brothers are engaged in the game or not. When they are engaged, their moves are faster, their defense tighter, their shot selection better. When they are checked out, the shots become constested fallaways and effort from play to play is an adventure.

But the twins are not entirely identical when comparing their performance in wins and losses. Marcus may not be entirely consistent, but his inconsistency has not led to wins vs. losses. Just last week, Marcus went 0-fer against the Clippers and Grizzlies, but the Suns went 1-1.

But when Keef is on his game, the Suns win. When he's not, they are more likely to lose.

Look at the difference in productivity for the entire 8-man rotation in win vs. losses. Each column shows the plus/minus difference in wins vs. losses for each player, with the first column being the average of all 8 major rotation players. 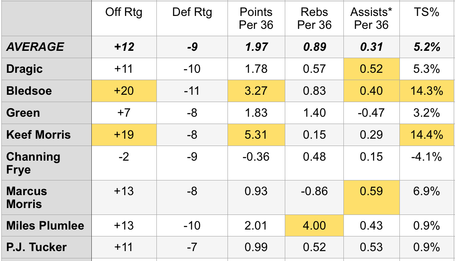 Each column shows the difference in a win vs. a loss, on a per-game or per-36 minute basis. Each of these players gets 20-35 minutes per game, so a per-36 comparison is a way to level the field.

Of course, every player plays a little better in a win. It's quite unlikely that a major rotation player is better in a loss, especially on a per-minute or per-possession basis.

The two players who stand out the most in wins vs. losses are 24-year olds Eric Bledsoe and Markieff Morris. When they shoot well, the Suns win. When they don't, the Suns are more likely to lose.

On a team whose scoring margin for the season is 3.2 points per game, when a player swings 5+ points/per 36 minutes between wins and losses, you can surmise that he is the key to winning.

In raw numbers, Markieff Morris plays 4.5 more minutes per game in wins vs. losses, with a raw scoring differential of nearly 6 whole points, which is a clear indication that the coaching staff can see the difference in Markieff from game to game as well.

With Bledsoe being out for at least the next week, the remaining rotation player who can be seen as the barometer between wins and losses is Markieff Morris.

The good thing, for a team embarking on a 5-game road trip without Bledsoe, is that Morris has been better on the road than he's been at home this season. In roughly the same minutes, Keef does everything slightly better on the road - scoring, shooting, rebounding and passing.

Like it or not, Keef Morris leads the Suns to wins and losses.

Let's hope that he has a very good road trip for a team that needs the wins.