It's great that the Phoenix Suns have dipped into the good-will pool to sign Leandro Barbosa to a 10-day contract, but how will that impact other young guards on the roster?

Just when you thought the good vibes were as high as possible, the Phoenix Suns pull a blur out of the hat to raise the bar a bit higher.

The Suns cannot officially sign former fan favorite and one-time "Sixth Man of the Year" Leandro Barbosa to a 10-day contract until today, the first day allowed by the NBA's CBA, but that's just a formality.

Just like Goran Dragic and Channing Frye remember great times in Phoenix, the Brazilian Blur had this to say back in 2012 after helping the Raptors beat the Suns in Phoenix:

LB after the January 24, 2012 game, on 'Suns Live', saying what he misses the most about Phoenix:

(after a long pause) "The fans was really great for me, man. The fans was unbelievable, and I miss that. It was 7 years here, and 7 great years for me in my life and my career and I can't forget about that. And definitely my teammates, and the organization too that helped me, you know, to be where I am right now, so I... I miss... I miss a lot in Phoenix."

LB looked like he was about to choke up at this point as Mark McClune wrapped it up and wished him well with his new teammates. 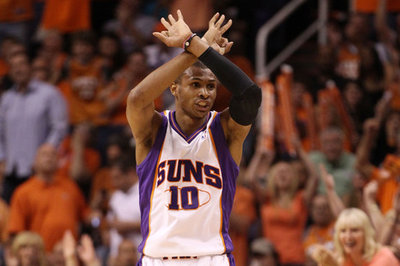 The Blur is Back!

Expect the Suns brass to talk about veteran influence in the locker room and on the floor while Eric Bledsoe recovers from a sprained knee. Per Paul Coro, the Suns did perform an MRI on Bledsoe and determined that he only needed rest, while Bledsoe himself said the knee was progressing. I wouldn't expect a long-term injury here.

And even if there IS a long-term injury to Bledsoe, there's no way a 31-year old Leandro Barbosa is the answer. You simply don't replace Bledsoe with a guy who was playing in the Brazilian league. More likely, Ish Smith and Gerald Green will continue to get more minutes in Bledsoe's place. It's when Bledsoe returns that Barbosa's long term role will be defined.

Ish Smith, by the way, is one of only three Suns backups since the 80s to collect at least two 8-assist games in less than 20 minutes of playing time in a single season. The others: Jeff Hornacek and Goran Dragic.

My expectation is that the team will mostly use this 10-day period to assess Barbosa's health (which seems fine, per video from recent games) and his ability to play at NBA levels this season (the bigger question). He will likely get small minutes - maybe in Archie's place - but won't take Smith's PG role.

If he's good, then he's veteran "fourth guard off the bench" over the team's inexperienced backup guards - Archie Goodwin, Dionte Christmas and Ish Smith - for what looks like a playoff run, once Bledsoe returns from the knee injury.

Barbosa can produce more offense in terms of catch-and-shoot threes than Ish Smith in two-PG lineups (lifetime 39% 3-point shooter), and Goodwin and Christmas have not been producing big numbers in limited time lately.

Goodwin (still only 19) and Christmas, both rookies, are great for a rebuilding team looking at the future, but if you're in a playoff run it's best to have guys who have been to and produced in the playoffs. And it's best to have someone who will do it consistently. A 10-year veteran gives you the same game every night.

As far as trade flexibility is concerned, the Suns will certainly have more roster flexibility.

Already, coach Hornacek only gives about 10 minutes a night to guys outside the top-8 in the rotation (again, with Smith taking Bledsoe's minutes in the top 8 during injury). Barbosa makes for a full 15-man roster. Why have a full roster if you're not going to play them?

But to surmise that a Barbosa signing is a definite tea leaf for an impending trade is no different than surmising any trades a week ago. Barbosa is more about veteran insurance than major rotation piece.

We all love Dionte Christmas, but not as much as the team in the locker room. He's a refreshing influence among the guys, really ingrained in their fabric of good will and hard work.

The Suns aren't hurting for money, but you can't forget that owner Robert Sarver is paying nearly $13 million this year to players no longer on the team (Childress, Beasley) and Christmas doesn't really have a rotation spot on a full roster.

Still, he's good to have around and you don't yet know if Barbosa can even play at NBA levels anymore. I'd vote to keep Christmas, but it's not my money.