Back to the future: Defensive rebounding killing the Phoenix Suns

A long time tradition is back in the Valley - great shooting, passable defending, but woeful rebounding. And against Minnesota, one of the league's best rebounding teams, that flaw could be magnified.

Share All sharing options for: Back to the future: Defensive rebounding killing the Phoenix Suns

A long franchise history of defensive rebounding woes - a byproduct of small, offense-first lineups - still resides in the scouting report when playing the Phoenix Suns.

Tell me something I don't know

First, let's put this into context. During the Suns' magical runs to the Conference Finals in the last decade, they often finished in the bottom five of defensive rebounding rate (% of time the Suns pulled down an opponent miss to take possession). This deficiency has been masked by shooting better than the opponent, and forcing just enough misses to eventually grab the ball.

In recent years, the Suns exacerbated the problem by allowing a higher shooting percentage to the opponent AND allowing them to rebound their own misses for putbacks, dropping the Suns into the bottom ten in just about every defensive category.

And then last year, they piled even more problems on top by missing more of their own shots than the opponent did.

Six months ago, fans and franchise stalwarts prayed that the Suns would some day approach the greatness of the past.

That the league's fourth-winningest franchise would go back to its roots and reclaim that spot as "fun if not flawed".

Dating back to when the Suns lost the coin toss for the first overall pick as a expansion team and missed out on Lew Alcindor (later Kareem Abdul-Jabbar), the Suns have patented themselves on a blueprint: offensively pleasing, defensively scrappy, yet rebounding-challenged.

When the Suns are shooting well, or even normally, the rebounding issues are overcome. In fact, even this year's Suns are 28th in defensive rebound percentage (ie. the % of opponent misses corralled by a Suns player), yet are one of the league's best stories because they shoot better than the opponent, thus negating any disadvantage from second-chance points.

I am not suggesting the Suns need to solve this problem. I'm just pointing out that when the Suns lose, its because this problem is even bigger than usual.

League average defensive rebound rate = 74.6%. The Suns currently at only 72.3% (28th overall), even though their overall defensive efficiency (points per opponent possession) is in the top third of the league thanks to forcing a lot of misses (11th in defensive field goal percentage, even factoring in those putbacks).

Putting all that together - good shooting + good field goal defense against bad rebounding - has the Suns at 20-13 overall. That's good. You don't throw away the formula because of a few losses.

However, its instructive to note that when the Suns lose, its because the opponent has magnified that difference on the boards to the point that the Suns cannot get enough stops to overcome a deficit.

After a drubbing at the hands of Memphis in early December, the Suns have reeled off 11 wins against only 4 losses to take a strong playoff position and raise expectations for the season.

In those 4 losses, the already-challenged Suns have only corralled 65% of available opponent misses while letting the opponent keep possession 35% of the time. 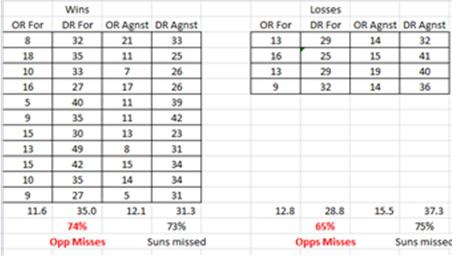 I'm not saying the Suns need to completely solve the defensive rebounding problem. I'm just saying "hey, maybe only grabbing 65% of the other team's misses is a problem".

When the Suns face Minnesota tonight, the rebounding issue could be a killer.

Minny ranks 2nd in the league in offensive rebounding (grabbing 29.9% of all their own misses). That's a terrible combo when paired with the Suns 72.3% of their misses this season (and just 65% in recent losses). So, you can expect the Wolves to get a lot more O-boards than you want them to get tonight.

Miles Plumlee has been the Suns' best rebounder this season (9.2 per game), but only ranks 81st in the league by grabbing 60.2% of all rebounding chances. P.J. Tucker rakes in 62.4% of his chances, while Channing Frye is close behind at 59.9% of chances.

By contrast, Minnesota's Kevin Love grabs 65% of his chances, good for 13.3 per game. Nikola Pekovic grabs just 56.2% of his chances (probably because Love takes a lot). He and Love combine for more than 30 chances a game between them (Frye and Plumlee only get about 25 chances a game combined), indicating that Minnesota likes to pack the paint to corral misses.

How is Minnesota only .500 on the season? By allowing the worst opponent shooting percentage in the league. Minny opponents shoot 47.5% every game.

By allowing a lot of makes but rebounding most of the misses, it appears that Minny's game plan is to let you shoot so they can rebound your misses while the Suns like to force a miss and take their chances on the boards.

If the Suns don't shoot well, it could be a Love/Pekovic mauling tonight. Unless the Suns flip the script and Plumlee, Frye and the Morrii come with their big boy pants to at least keep the rebounding deficit manageable.