Phoenix Suns Trade Grades: Where the prior regime didn't do too badly after all

Share All sharing options for: Phoenix Suns Trade Grades: Where the prior regime didn't do too badly after all

Over the past 12 months, the Phoenix Suns have risen from the ashes of their worst period of basketball since the inception of the team more than 40 years ago. Much of that success is on the back of a series of trades made during the summer of 2013.

In just over 18 months, the Suns front office led by new GM Ryan McDonough has shaped a playoff contender by either acquiring or re-signing every single player on the roster besides incumbent third team All-NBA player Goran Dragic.

Only Markieff Morris (draft), Marcus Morris (trade), P.J. Tucker (free agent) and Goran Dragic (free agent) pre-date Ryan McDonough, and three of those were re-signed to long term deals this off season. The Suns even tried to hedge their bets on Goran Dragic by signing his brother to a multi-year contract last week.

Conventional wisdom says that the prior GM was awful with a capital A, W, F, U and L. And that the new GM is a miracle-worker.

While that is likely true, one must give a bit of credit where credit is due. In the twelve months before the Phoenix melted into ashes, the Suns front office did make some future-oriented trades to help shape the Suns of tomorrow. Some of those deals have not yet come to fruition, but they can be graded nonetheless.

We are just looking at trades here. Not free agent signings or draft picks. 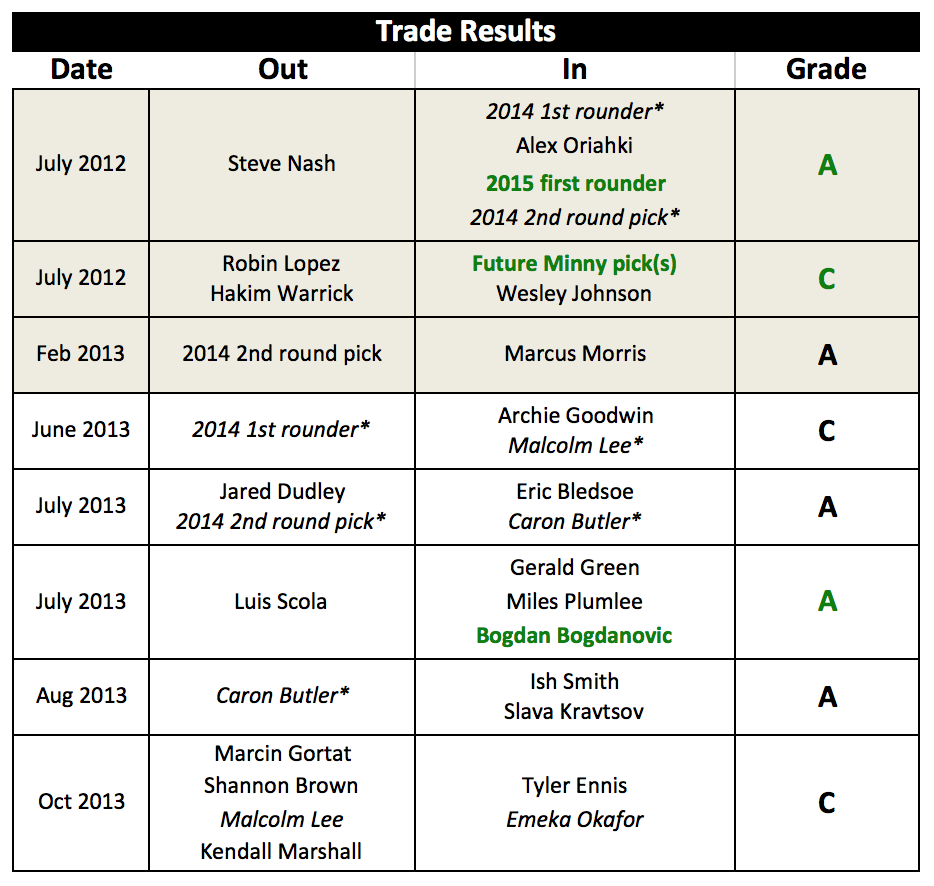 The Steve Nash and Robin Lopez trades were future-based, both netting draft picks that even now have not fully come to fruition.

The Nash trade has so far netted diamond-in-the-rough Archie Goodwin, but the Oriakhi pick was a dud. The 2014 second-round pick from the Lakers was used in the Bledsoe deal (either that or the Lopez deal, I can't tell). Still to come is the best pick of the bunch - a top-5 protected pick in the 2015 Draft. It's very likely a lottery pick. With Nash's injuries and decline, you have to call that a big win for the Suns even though they've seen no production from the picks yet.

The Lopez trade was a wash, and could ultimately turn out to be a big failure for the Suns. In the short term, it was a win for the Suns. The Minny pick looked good, and the Suns needed to clear the logjam between Lopez and Marcin Gortat. But the long-term benefit has yet to be realized. Lopez was traded a year later to Portland for a second-round pick, while Gortat was traded to Washington. The two players, despite being starters, netted a grand total of a two draft picks in the summer of 2014. Still, Lopez is in line for a raise in 2015, while Gortat got $12 million per year from Washington in a new contract.

The Marcus Morris acquisition was seen by many as a gimmick to create twinnies, but to get a long-term rotation player for a second-round pick has to be considered a win for the Suns.

Led by Ryan McDonough, with the support of Assistant GMs Pat Connelly and Trevor Buckstein and President Lon Babby, the new Suns regime cleaned up last summer in the trade market.

However, the Marcin Gortat trade could ultimately turn out to be a dud. Gortat played very well for Washington, netting a $60 million contract this offseason, and even Kendall Marshall became a serviceable NBA player. In return, the Suns only have 20 year old Tyler Ennis, their fourth PG who will spend most of the year in a suit or in Bakersfield.

However, even the Gortat trade was a short-term win, in that it cleared a major rotational logjam, allowing the young Suns to flourish with well-defined roles and surprise the league with a group of castoffs and never-weres.

We would all agree that the new front office is Miles better than the old one.

The McDonough trades have been much more high-profile and had a better immediate return. I simply wanted to point out that some of the final trades of that old front office did set up the current team for success.