Phoenix Suns' 9-5 record is better than it looks

As the actual games unfolded, the Phoenix Suns have looked - and felt - disappointed with some of the outcomes. But a 9-5 record after 14 games is really a solid start. Let's look at the rest of 2014.

Share All sharing options for: Phoenix Suns' 9-5 record is better than it looks

Great expectations when bumped up against reality are generally met with disappointment.

Such was the case with the Phoenix Suns coming out of the gate this season. Realism aside, we hoped that the unusual lineup would mesh immediately, and that every player would pre-subjugate their egos for the good of team before finding out if those egos would fit without such sacrifice. 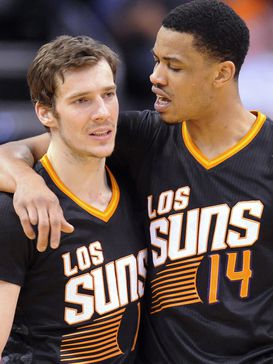 Will have to dig deep to stay in playoff race

Regardless of the meshing, the schedule itself was not an easy one even though the season started with a bunch of home games. When reviewing the schedule in August, I did not expect the Suns to dominate.

But despite the rocky start, the Phoenix Suns find themselves with a 9-5 record and a few more winnable games in the next 2 weeks before a tough roadie through Texas.

The first 10 - tougher than it looked

Coming out of the chute, we all wanted the Suns to take advantage of the home-heavy slate. But back in August I thought this schedule was a really tough one (minus the easy Laker games) and would have been happy with a 5-5 outcome.

A year ago, the Suns went 10-18 against their non-Laker season-opening opponents.

The Spurs, Jazz, Grizzlies, Kings, Warriors, Nets, Hornets and Clippers were tough on the Suns last season. I mean, you almost couldn't find a tougher group of opponents for this team. A year ago, the Suns went 10-18 against those opponents (and that includes the season-ending "Archie show" against the Kings).

Looking at it that way, a 5-5 record after 10 isn't so bad. I guess we should be satisfied they took care of the Lakers and found a way to go 3-5 against a group of teams that had the Suns number even when the chemistry was great a year ago.

The Suns started the longest road trip of the season with a game against the Clippers, but then headed East with an opportunity to get a run going.

On paper, games against the lowly Celtics, Pistons, Sixers and Pacers should be a walk in the park. But road games are always tough because teams playing at home are playing with the crowd behind them. Luckily, the Suns were able to pull out wins against the Celtics and Pistons in the closing minute before laying the hammer on the Sixers and Pacers on consecutive nights.

The final game of the road trip is on Monday night, against the high-flying Raptors. The Raptors just came back to beat the "vaunted" Cavaliers on Saturday night to run their record to 11-2. They are built similar to the Suns, in that they rely mostly on guards for scoring while using their big men for the dirty work under the basket. They brought back the same team as a year ago, and are right now running roughshod over the league.

Winning that game would be a huge feat early in the season, right up there with beating San Antonio in week one and ahead of beating Golden State and Brooklyn. The Raptors are the real deal.

Even with a loss though, a 9-6 record after 15 games is solid. Not spectacular, but solid.

Coming up - what's your prediction?

The schedule through the end of the calendar year is actually pretty manageable.

The Suns have gone a collective 32-19 against these opponents in the past 1+ years (including this season's first 14 games). Their worst showings are against the Mavericks, Clippers and Kings, while they have swept the Nuggets, Magic, Pacers, Bucks and Pelicans under Hornacek.

I can see the Suns finishing the calendar year at 20-14 easily. With a good run of making their open shots, it's possible we will see an even better record than a year ago's start (21-13 through 34 games, including a 19-11 start before Bledsoe went down).

What's your prediction for the rest of 2014, now that you've seen this team in action?