In the getaway game right before the long All-Star break, the Phoenix Suns face the Heatles in the valley of the sun.

The Miami HEAT beat the upstart Phoenix Suns by 15 points back in November when the Suns were also without Eric Bledsoe (shin that time).

This time, the 30-20 Suns know more about who they are as a team. The Suns play high-powered offense and fight hard every game to the tune of 30 wins in 50 games, just 5 wins behind the two-time defending champs.

This is all that needs to be said about that.

In the words of opposing coach Erik Spoelstra to Paul Coro after practice on Monday:

"At this point, they're not a surprise. We're in the last third of the season. They're for real."

While the Suns are good overall, they are really bad on two days rest, losing 6 of their first 8 such games this season. Luckily, they won on Saturday night against Golden State in the same such situation, so maybe they have broken that bad habit.

If Gerald Green can put up 20 points, the Suns can win the game. The Suns are 10-0 in Green's last 10 20-point games. Green had 12 points as the starting shooting guard in the early-season loss to the HEAT in Miami that dropped the Suns to 7-7 overall.

Unfortunately, Green has more games scoring fewer than 10 points (15 such occasions) than games scoring 20+ (13 games) despite playing 20+ minutes in 44 of 50 games. Coach Hornacek loves Green's attitude though, and will continue to play Green even when he is in a slump. Recently, Green has developed a pattern of over-shooting threes to get himself out of a slump in a game while he is a better offensive player when he shoots from various distances.

Markieff Morris may be the Suns barometer, but Green can be the Suns' solar flare on any given night. 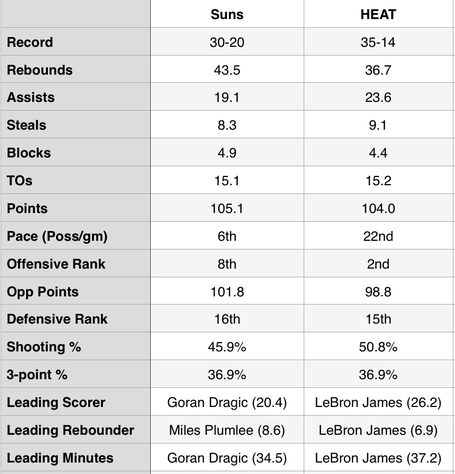 So let's focus on the big men. That's not a typo in the stats - the Miami Heat are pulling down only 36 rebounds per game (worst in the NBA) while the Suns are up to 17th in the league overall with more than 43 per game. The poor rebounding is hurting the Heat's defensive efficiency.

If you think the Suns are bad on the boards, the HEAT are a new level of bad. The Heat, playing Bosh and James as the bigs, are the league's worst defensive rebounding team and they have the league's worst defensive field goal % allowed. It's not like they force other teams to play small to negate their rebounding problems - they just cannot pull down the boards and stop other teams from getting points.

If Channing Frye, Miles Plumlee, Markieff Morris and Alex Len can extend possessions and get second-chance points, the Suns can keep the game close against the league's second-best offense overall.

The Suns can keep it close by playing hard and crashing the boards, but the HEAT are the HEAT. Any win by the Suns would be a huge, huge upset.

But, I said that about Indiana too.