In this weekly segment, I discuss some thoughts on Eric Bledsoe's free agency, the sad end of Steve Nash's career and more.

Share All sharing options for: Solar Flares: Phoenix Suns musings - a max contract for Eric Bledsoe and the Twilight of Steve Nash's career.

The Suns are heading into All-Star break with a slight bit of disappointment coming from Goran Dragic's All-Star snub and from a hard-fought loss to the Miami Heat earlier in the week.

However, things have been overwhelmingly positive for the Suns this year. The team has surpassed approximately 100% of the everyone's expectations in order to win somewhere around 2590245% more games than they had been projected to before the season began. Basically every single player on the roster is having the best year of his career, Eric Bledsoe emerged as a young star before his injury and Goran Dragic showed the NBA why he's the most underrated player in the league after said injury.

Things continue to look up for the Suns. The team is seemingly involved in nearly every trade rumor that pops up due to Phoenix's status as a "buyer" (with Emeka Okafor's valuable contract) andEric Bledsoe is expected to return in the near future.

So for now, cheer on Miles Plumlee and Goran Dragic during this weekend's Rising Stars game and Skills Challenge, respectively, and brace yourselves for a whirlwind of trade rumors before the February 20 deadline.

Let's now take a look at some random Suns-related content that has recently floated around various parts of the internet and some of my musings.

Link of the Week: Suns will "absolutely" match any offer Bledsoe receives 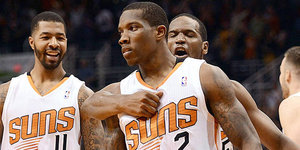 Phoenix Suns President of Basketball Operations Lon Babby was a guest on the Doug and Wolf Show on Arizona Sports 98.7 FM this Tuesday. When asked about Eric Bledsoe's future in Phoenix, he reiterated the franchise's plans to match any offer Bledsoe will receive in his restricted free agency this summer.

This is likely an attempt from Babby to dissuade GMs of other teams from wasting their time and efforts on Bledsoe this July so the Suns can save some money. However, I still believe at least one team will present a max offer sheet to Bledsoe--and one is all it takes. I also think the Suns will remain true to their words and match any such offer.

But in the words of the venerable Missy Elliott, is it worth it? Let me work it:

Too many fans hear "max contract" and assume things that aren't necessarily accurate. In the NBA, not all max contracts are the same. Take a look at the breakdown of the different types of maxes players in the NBA can receive (from the NBA Salary Cap FAQ):

Since he's coming off a rookie contract, Eric Bledsoe is eligible to receive 25% of the salary cap in the form of a maximum contract. I do believe that Bledsoe has shown enough this season to not only command such an offer sheet from another team, but to push the Suns to match one.

To take a closer look at the flexibility the Suns will have this summer after retaining Bledsoe's contract, I added a sheet to the spreadsheet above ("Bledsoe & Tucker extensions") with projected extensions for him and PJ Tucker. I gave Bledsoe a maximum contract starting at the 2013-14 max salary of $13.7 million, while Tucker receives a Jared Dudley extension of $4.25 million per year in this scenario.

In such a situation, the Suns would field the current roster minus Okafor, Kravtsov, Christmas and Barbosa and would have a total payroll of just under $50 million. With the 2014-15 salary cap projected to be over $60 million, the Suns would have over $10 million in cap room after these new contracts for Bledsoe and Tucker. They would be able to use that room to sign drafted rookies, go after free agents or retain flexibility for a blockbuster trade in which they could take back more salary than they'd send out.

The possibilities don't just end there. If Ryan McDonough and co. are determined to chase a major free agent this summer, they could potentially sign one before going over the cap to retain their own restricted free agent, Bledsoe. This scenario would require to retain Bledsoe's cap hold of about $6.6 million, sign a free agent first and then match an offer sheet for Bledsoe. Although they'd be over the cap for the 2014-15 season, such maneuvering could give Phoenix about $8 million in addition cap flexibility this summer.

The bottom line is that the Phoenix Suns will have plenty of flexibility this summer, even with a mini-max contract for their mini-LeBron.

Video of the Week: The Sad Decline of Steve Nash

I understand that many Suns fans still refuse to acknowledge Steve Nash's presence because of his current existence on a Lakers roster. I know that a lot of people who adored him for so long still dislike him today after he requested a trade nearly two years ago to a hated rival just a week after claiming he'd never be able to don the purple and gold because he considered himself to be "old school."

I get that. I really do--I was one of those people for a long time, and still partly am.

But bear with me here.

Steve Nash is the reason I am a basketball fan. He is why I turned on a Suns game in 2005, didn't change the channel and never looked back. If it weren't for his years in purple and orange, I might have never begun watching sports and I may never have immersed myself in the terrible, wonderful and beautiful world of being a crazed fan. It may sound overly melodramatic, but I don't think it's a stretch to say I would not be the fan I am today nor the person I am today without a skinny Canadian dude who looked nothing like a prototypical NBA athlete for all of his 17 years in the league.

This is why it makes me sad to watch that tremendous Grantland feature above (you should also give this great accompanying column by Bill Simmons a read). After rooting for the Lakers to fail through all of 2012-13 and reveling in the disastrous outcome of that much-publicized squad, I realized this year that one feeling overshadows all others when I think, watch or read about Steve Nash: nostalgia.

I have such fond memories of his years in Phoenix--and always will--that I feel sad every time I hear of Nash's latest setback in LA. This was a guy that I idolized through all of my teenage years, only to feel a confusing amount of anger when he seemingly "betrayed" Suns fans in 2012. That anger turned to indifference when Nash suffered his first injury in LA and indifference became pity after last summer as I watched him try to overcome injuries and contribute to a miserable 2013-14 Lakers team.

Now, I feel neither anger nor indifference to Steve Nash. As the 40-year old attempts to recover from yet another physical setback, I watch in fond memory of the player he once was for my favorite team. I may no longer consider him to be the "can-do-no-wrong" hero I naively thought he was when I was younger, but I now have admiration for the old man trying to prove he's more than just an overpaid, forgotten former star. As a selfish and nostalgic fan, I just hate to see Nash end his career this way, no matter the colors on his jersey.

I'm not trying to say that Suns fans who prefer to ignore Steve Nash or continue to dislike him are wrong in anyway--they're not. But as someone who owes so much of his fandom to Nash, I think I've come full circle and am hoping for him to physically recover to the point of being able to retire when he wants to, not when Father Time wants him to.

In my quest to get Goran Dragic to file a restraining order against me commemorate Goran's stellar play this year, I've taken to making really awful photoshops of him. On a related note, I should point out that I don't really know how to use Photoshop, so when I say "awful," I've never meant it more.

This week, I'm presenting How to Train Your Dragon, co-starring Jeff Hornacek as the masterful coach who has tapped into The Dragon's immense potential, resulting in the best play of the latter's career: 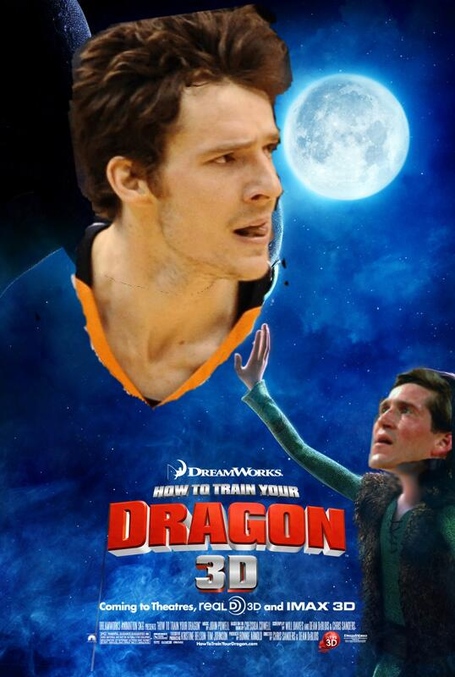 Suns President Lon Babby on the trade deadline: "We are all in agreement in the principle of, 'Don't be blinded by instant gratification.'"

Man I love this Suns team. Tough, fast and well coached. One of the best stories in the NBA this year.

Goran Dragic is the first in nearly a full year to score at least 34 on as few as 13 shots...

Jesus, the Suns now have a better record than the Warriors. Can Jeff Hornacek win MVP rather than Coach of the Year?

Goran Dragic with a career high 34 points on THIRTEEN shots. And one giant middle finger to the All-Star game.

The Miami Heat played a big role in affecting the West standings this week. LeBron James dominated in Phoenix to eke out a close win over the Suns and buried the Warriors the very next night with a nasty fadeaway three-pointer. King James of the East had his way with the West.

The Mavericks have jumped over both Phoenix and Golden State to hold the 6th seed in the West heading into the All-Star break, while the Suns are 7th and Warriors are 8th. It's going to be a wild ride to the postseason, folks.

I haven't done a Solar Flares in a while so I thought I'd change it up a bit this time. Any other news you'd like to share? Any suggestions for what else you'd like me to do/include in these weekly segments (I'm open to anything!)? As always, feel free to discuss below.