The most interesting parts of this story are not in the teaser. In fact, the title is what I'm using to draw you in and this is meant to share parts of intentional ambiguity, insipidness and intrigue. This isn't the movie trailer that shows the only entertaining moments in the film... it's not even a movie trailer at all.

This article brought to you by Smoothie King. With over 600 locations, including two in the Phoenix Metro area, a new level of refreshment may be closer than you realize. So, "be good to yourself" and reach for smoothie royalty.

Did my "creating intrigue by lack of intrigue" in the teaser work? I'm trying to practice some better writing techniques in the story.  See if you can notice them and let me know what you think.

I'm using this sentence as my segue.

Speaking of kings, I see an obvious endorsement deal in the making. The king of basketball and the king of smoothies.

Celebrity actor X ravenously gulps down smoothie - "No, this is the King."

LeBron grabs a smoothie and takes a swig.

A voice-over says "Be good to yourself." *Jim drops the mic and walks off the stage.

Then again, I can see a conflict of interest there...

But enough of that (for now). What I'm digressing towards next is the chimerical notion of LeBron James becoming a Phoenix Sun. Am I completely daft or pointlessly woolgathering? I scoffed at people who suggested this type of scenario in the past, but it actually seems like things may have shifted just slightly. Is there really a Lloyd Christmas type of a shot here?

Let's consider a couple of factors...

1. Eric Bledsoe and LeBron are total besties. I've heard they have matching tattoos. James' fawning is practically embarrassing, or genuinely older brotherly if you're not dominated by cynicism (like me). They have the same agent. They've shared a toothbrush. In all earnestness, though, are there really many other people in the NBA that it seems like LeBron would rather play with?

2. Phoenix is an awesome place to play and live part time. Great winter weather. Relatively low cost of living. LeBron needs to work on his golf game. Phoenix may not have the gravitational pull of Los Angeles, but players really like to play here and it's not a secret around the league. The organization is well respected and the training staff is unilaterally considered the best in the league.

3. The ability to be truly deified by a fan base. Yes, LeBron has achieved his goal of winning championships in Miami, but those pale in comparison to the enormity of winning one for Phoenix. If the legend of Dirty Joe LeBron James could possibly grow even larger this could be a way to do it. It would be like the inception of the Heat Index all over again, but without the cheap, fake fanfare surrounding that situation. There are fans in Phoenix that have been waiting all their lives for a banner and King would be immortalized if he helped hang it.

4. The ability to be surrounded by the best collection of talent during his career. The Suns are really perfectly situated for a star player to come in and make this league their (you know what). James is already calling Goran "Dragon." Bledsoe returning gives the Suns one of the best backcourts in the league with two improving players. Lots of other pieces. Draft picks. And...

5. Ryan McMidas. It's hard for me to imagine him doing anything that would totally blindside me. King Midas. King James. Smoothie King.

Maybe I'm staggeringly delusional with these inane ramblings, but until LeBron is inked to his next deal I'm going to live life loud and dream like an idiot.

The 2014 NBA All-Star game, and ancillary festivities, is coming up this weekend and the Slam Dunk competition will once again be a travesty of its former self. People who we'd really rather not watch will gather at Smoothie King Stadium, home of the Pelicans, and participate in an even that used to be must see tv and is now an afterthought.

BTW, how bush league does Smoothie King Stadium, home of the Pelicans, sound? Am I the only one who thinks... "Is this a Double A baseball team?" Err... I mean... Smoothie King is a great name for a stadium!

*Warning this next part is copy/pasted from an email I sent about this topic in a group thread that nobody responded to.

I was just thinking (something I'm not very good at) in the wake of LeBron James' dunkfest...

Why don't they incentivize players to enter the competition by offering a prize donated to charity for the winner?

Call it the $1,000,000 "Enter Sponsor Here" All-Star Slam Dunk Challenge with the money being donated to a charity of the winner's choosing. Couldn't that put some pressure on guys like LeBron to enter? The NBA could even help shoulder some of the burden of the prize as part of its NBA (sorta) Cares program since they would get better ratings...

Players could enter and a "panel?" could select the best entrants. I would definitely set aside time to watch a dunk contest with LeBron, Durant, Griffin, George, Howard, etc. in it.

Going further, why not have each entrant in the competition sponsor a fan that was selected based on voting for the starters in the All-Star game? A free trip to the game for each finalist and a cash prize for the ultimate winner as well as a picture with the check, trophy and winner. Hell, bring a class of kids from a local school to be involved and get swag. You know, something absolutely incredible.
Or they could stick with the barely watchable, lazy shill that they've been rolling out lately. Either way.

Notice the grace with which I shift gears.

Since I like to beat horses (they don't have to be dead, but don't tell People for Eating Tasty Animals) I'm going to go ahead and throw this out there just to see if it resonates.

There have been a lot of stats floating around evincing how beastly the Dragon has been this season, but I want to be a snowflake and put forth my very own for consideration. By cherry picking the most favorable sets of data I can make my factoid seem quite impressive. If Goran Dragic continues his incendiary pace, which has actually been gaining momentum recently, he will end up with historically great numbers. Not great numbers with respect to his current set of peers. Historically great.

In NBA history there have only been 25 seasons in which a player has posted better numbers in the triumvirate of points per game (20.3), TS% (.613) and WS/48 (.206) than what Goran is averaging now. That's seasons, not players.

Here's the list if you'd like to peruse it, but I've listed the players below.  The season finder was being insolent, so there's actually a season for Malone and one for Kareem that don't really qualify.

Pretty impressive company, right?  Among active players it's only LeBron, Durant, Amar'e and Howard.  That would make Goran the only active guard.  What if we throw in Goran's 6.2 assists?

Then it's just Michael, Magic, Wilt and LeBron (and coming to a theater near you... the Dragon - there's the movie trailer).

What's great is that Dragic is on an ascending trajectory and has a history of improving each year as the season progresses. He might actually move up that list. This season may put him among the pantheon in terms of efficient volume scoring while being a multidimensional threat as a distributor.

Now I will elegantly glide to a related topic.

This is just a logical lacuna to help differentiate between the transition and the launching of my new campaign to spread the word that...

Goran Dragic is having an All-NBA caliber season.

The Suns have been doing an inadequately insufficient job of promoting Goran so I think it's time for an intervention. Who can help them breathe some fire into this campaign? Perhaps the individual responsible for the new Smoothie King hit commercial in the making...

Here's an idea, let's (and by let's I mean you, Phoenix Suns) make sure people know how to say the One Man Fastbreak's name. Push the Dragon theme and teach people that it's Dragic like Dragon- the same g sound. Even the national media guys can probably catch on and start pronouncing his name correctly if it gets shoved down their throat enough times. Instruction by repetition might be the only way that works with people that specifically talk about and broadcast basketball for a living. Without these instructional tools they can't be expected to know the pronunciation of the pretty damn easy name of a guy who's becoming one of the better players in the league.

Then, keep running with the Dragon theme. When people think Dragic they should be envisioning fire and brimstone while he's flying down the court ready to go medieval on his opponents' ass. Name recognition.

It should be easy to fund project Dragon Fire with the buckets full of cash the Suns are piling into closets thanks to paying Goran pennies on the dollar for his staggering production.

If they want they can even use my body art to help the cause. 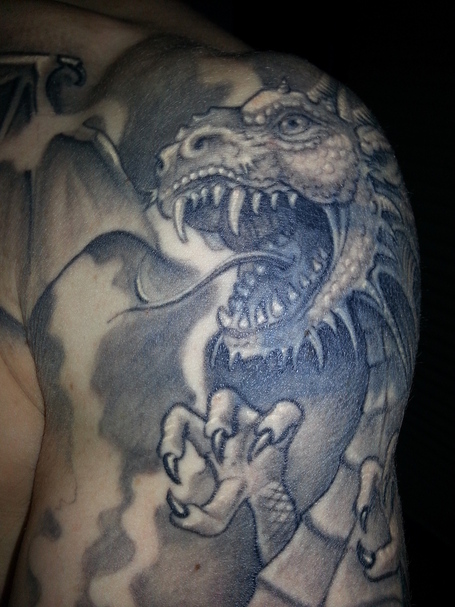 Yes, that's my shoulder. I'm actually still getting work done on this.  It's not complete. And I sh&^ you not, I have a Phoenix on my other shoulder. Isn't it serendipitous how the passion of my sporting life mirrors the symbolism for these mythical creatures and what they represent? Even I can see ways that this could be exploited.

And I'm an idiot.

Why not get busy with some art and graphics to tie the Phoenix and Dragon concepts together?  This stuff practically markets itself. Here's one I did below that creates a bond between Goran and the Gorilla (that's G Twice, like Going Gorilla and my man Gerald Green). Now do this with the Phoenix and the Dragon. 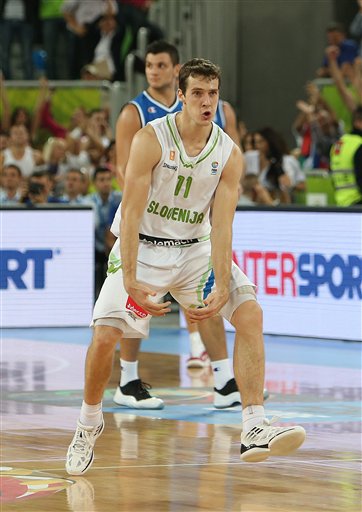 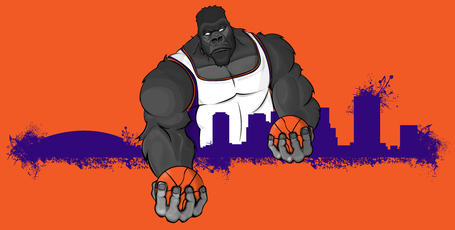 It's like a mirror image.  Coincidence?  I think not.

I was going to delve into a few more things, but I think I can save you from a fate worse than death them for next time. That would be the next weekly installment of an article that posts on a wildly unpredictable basis.

*The views and opinions expressed in this article towards Smoothie King are those of the author and do not reflect those of SB Nation and Bright Side of the Sun... even though if you cornered them off the record I'm sure they'd admit they're absolutely delicious. The author has not received any financial compensation for any part of this article, but would entertain any offer for monetary considerations including, but not limited to, bribes.