It's not often you get a small meet-and-greet with the Doctor himself, Julius Erving. Even less often when you share a drink while talking about the old days and the new days of NBA basketball.

One of the best aspects of this All-Star Weekend 2014 in New Orleans was to meet a living legend in the annals of NBA History - Julius "The Doctor" Erving, or "Dr. J". I had the fortune to have a quick conversation with the superstar and even got a grainy picture of us together by taking a "selfie" with the Doctor. 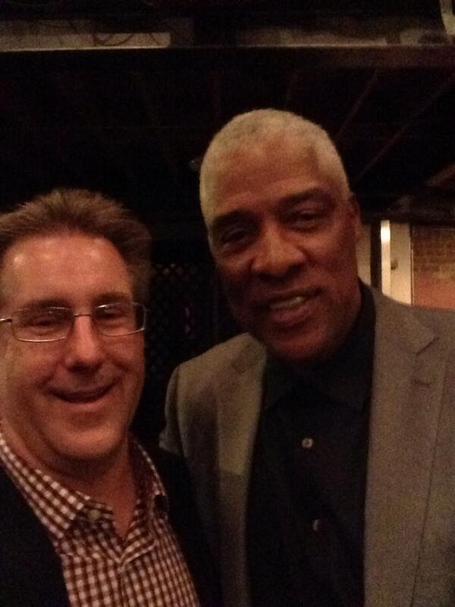 Dr. J. is a spokesman for Crown Royal and joined us for a tasting of some of the best whiskeys Crown Royal has to offer. He graciously introduced our "Master of Whiskey" for the evening, then was quick to note that there were two masters in the building as he himself was a "Master of Basketball".

The Doctor first told us how he got his nickname while growing up - his close friend and basketball rival called himself "The Professor" while Julius was "The Doctor". For a long time, only they used those names until Erving was playing in the Rucker League and didn't like the other nicknames people tried to give him. He went with The Doctor from that day forward. 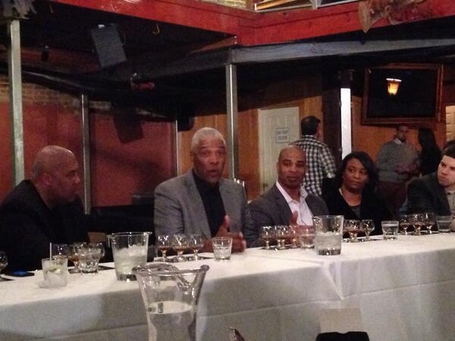 Later, when asked about his favorite dunkers - a seeming 'feeder' question to talk of himself - the Doctor actually went in another direction.

"You know, no one ever mentions Wilt Chamberlain," he said.

He went on to mention other big men such as Moses Malone and, later, Shaquille O'Neal as some excellent dunkers as well who never got the credit.

But Dr. J. himself was a major reason events like the Dunk Contest existed in the first place, with his beautiful high-flying act on the court. A master of basketball indeed.

When asked if he'd ever tried to back out of the Dunk Contest, like modern day superstars do all the time, the Doctor scoffed. He said players today start their career with handlers and advisors before they've proven themselves, and that those advisors tell them to avoid such exhibitions. You didn't get such handlers in the early years of your career back in the 70s and 80s.

The conversation turned to advanced stats, which the Doctor answered in a complex fashion. He first pointed out that it is very difficult to dissect the entire game or player based on recordings and statistics. But then he admitted stats would have been a way to preserve the history of the game in his days and the days before him, because all we have left is grainy footage.

The interview finished with a one-on-one side chat with the Doctor. I asked him what he thought of LeBron James' comment that LBJ himself would make the Mount Rushmore of all-time NBA. Either the Doctor is a really good at shifting the topic or he just didn't know about LeBron's calculation. Erving laughed it off as went on to his next gig, the Sprite All-Star Slam Dunk contest.

My gut feel, based on how the Doctor answered questions all night, is that Erving would not put LeBron into any pantheon as rare as a top-4 all time. At least not right now.