Has it really been over a week since the Phoenix Suns played an actual NBA game? How did we survive such a barren stretch of basketball action? Oh my god, let's do this!

The Suns kick off the unofficial second half of the season on the road against the Denver Nuggets. On paper, this looks to be a good match-up for Phoenix. The Suns have won all 3 games versus Denver so far this season, 2 of them by double digits. A win tonight and Phoenix adds yet another season sweep of an opponent to their list of accomplishments this season. But this is no gimme. Denver has played the Suns closely for most of those three games and Phoenix needed a 21 point comeback to beat them in December.

Denver is in a tough spot. At 24-27, they are in the dreaded NBA no man's land between a good lottery pick and the playoffs. They are 6 games out of the 8 seed in a very competitive Western Conference and would need one or more of the teams ahead of them to fall off precipitously to sneak in. Either that, or play completely above the level they've been playing at for the last 51 games. A rash of injuries has not helped that cause. Neither seems likely, nor does playing so poorly as to secure a decent draft pick. Thanks, Leastern Conference!

Ty Lawson tends to give the Suns fits and went off for 29 points in their first meeting and 17 points and 14 assists in their last. However, he is doubtful for the Nuggets with a fractured rib, so Randy Foye will have his hands full trying to contain Goran Dragic. Denver's style matches up well with Phoenix as they are 4th in the NBA in pace, while the Suns are 6th. If the altitude doesn't slow Phoenix down, this should be a fast-paced high-scoring affair.

The Suns for their part are in a virtual dead heat with Golden State for the 7th and 8th seeds in the playoffs with Memphis only a game and a half back in the 9 spot. There's a good chance it will take 50 wins to make the playoffs in the west. The Suns need every win they can get. After going into the break as the losers of 3 of 4, a win versus Denver would be an auspicious beginning for their playoff push.

Phoenix's power forwards have been the heroes every time against Denver this season. First it was Western Conference Player of the Week Markieff Morris unloading 28 points and 10 boards on the unsuspecting Nuggets in November. He followed that up in December with 25 points and 6 boards. Finally, in January, Channing Frye went an unbelievable 12-16 from the field to hang 30 on Denver. Does that mean it's Channing's turn or will The Barometer Rise again? 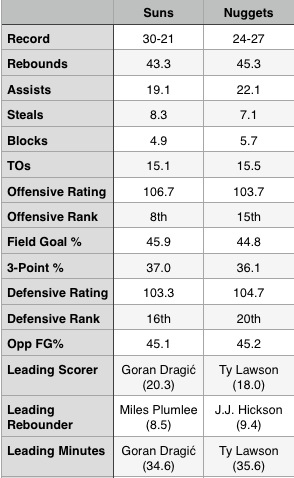 Ty Lawson carries a lot of water for Denver, so his absence will be sorely missed. Otherwise, the Nuggets are a mediocre team on both ends of the floor. Advantage: Suns!

Phoenix will be without Emeka Okafor (neck) and Eric Bledsoe (knee). The Nuggets have caught a nasty case of the injury bug and are missing Ty Lawson (doubtful - rib), Danilo Gallinari (knee), JaVale McGee (tibia), and Nate Robinson (knee). The opportunity is ripe for the Suns to take care of the short-handed (and legged) Nuggets.

The Phoenix Suns vs. A Long Layoff - I don't mean to sell Denver short, but the Suns are their own worst enemy tonight. Phoenix is 5-9 with 2 or more days off this season. If they come out sluggish, this will be a game they will regret not winning. If you're looking for an on-the-court matchup, look no further than the Goran Dragić vs. Randy Foye. The Dragon carries this team and if he can take advantage of the serviceable but unremarkable Foye, the Suns should beast. Also keep an eye on bench play. Denver has the 3rd highest scoring bench squad in the league, so Ish Smith, Leandro Barbosa, Markieff Morris and Marcus Morris will have to represent.

Jeff Hornacek will have his team fired up to take the second half of the season by storm. The Suns will look to score early and often against an under-manned Denver team. The Suns should win convincingly. 120-99, Phoenix.