This could be the last game for each team with their current lineup. For the Boston Celtics, that would be a welcome change but for Phoenix it would be rolling the dice on an already successful season.

On the eve of the trading deadline, two gunslingers meet up in Phoenix to try to beat each other at their own game. We are talking about the General Managers of each team - Ryan McDonough of the Phoenix Suns and Danny Ainge of the Boston Celtics - not the players on the court.

This time tomorrow, each team might look a whole lot different than they will at the opening tip at US Airways Center tonight at 7pm. The Celtics are shopping much of their starting lineup, while the Suns are looking to simply add a piece or two to the existing roster.

The Phoenix Suns, currently 6th in the West, need a win on their home court against a losing team. They need to pad their record in this home stretch before taking to the road for 14 of their last 21 games on the season. Tonight's game itself should be predictable, which probably means that it won't be. The Suns will be tired from last night's OT win and have struggled against slow-it-down teams like the Celtics.

The Celtics have been a swirl of trade rumors all season long. First, Ainge dumped two of his best players over the summer without bringing back any high-end youth (though he did get good draft picks). Now he's got a number of solid-average players who look a heck of a lot like last year's Phoenix Suns - too many role players mismatched on a ragtag roster.

To wit, the Celtics started three small forwards in their last game - Jeff Green, Gerald Wallace and Brandon Bass - while slotting a natural PF into the pivot. Rajon Rondo must have been cringing in that lineup.

But Boston has been competitive this season, if not winners on a regular basis. Rookie coach Brad Stevens has won the respect of players and peers. Now he just needs a younger roster ready to take to his teachings, like Suns coach Jeff Hornacek has done in Phoenix.

The Phoenix Suns are now 12-10 since Eric Bledsoe went down in late December - treading water and maintaining playoff position, if not improving their winning percentage or playoff chances any more than they were at 19-11 before his injury.

This is not to say the Suns, sans Bledsoe, are a poor team. It's not even to say the Suns can't win a playoff series. It's simply saying that the Suns are better with two 20-point scorers in their lineup than one. Without Bledsoe, the Suns are relying on a heavy dose of team basketball and effort along with a sprinkling of big scoring games along the lineup.

Backup power forward Markieff Morris leads the league with 7 double-doubles off the bench (including 13 and 12 last night). Kieff has 10 of his own 20+ point games. 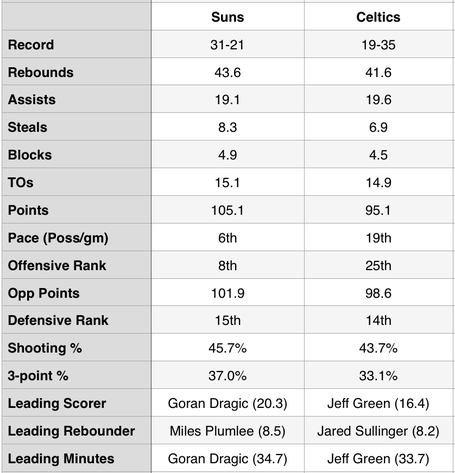 The team recently got Rajon Rondo back from a year-long injury. Rondo has not been playing like the Rajon of old, but that could happen any time against any opponent. Let's hope it's not against the Suns.

With the trade deadline tomorrow, the GM who taught Ryan McDonough to be unafraid will almost certainly be in Phoenix today for the game, allowing these guys to hash out any deals in one-to-one fashion.

Ainge wants to divest his team of as many bad contracts as possible (Gerald Wallace, for one), but also has some nice pieces to trade and expiring contracts to exchange.

McDonough wants to improve a playoff team while giving up as little as possible in the process. He's armed with a huge expiring deal (Okafor) and a bevy of future #1 picks.

While players like Jeff Green and Gerald Wallace make too much money for their contributions, I would not be surprised to see two friends swap Okafor to the Celtics for someone like backup PF Kris Humphries (expiring) to provide rebounding down the stretch. Humphries is free this summer, meaning he won't impact the Suns beyond this playoff run.

Larger deals may be discussed (Rondo for one of the Suns starting PGs and picks, Green, Bass) but those are much more unlikely because they don't appreciably make the Suns better for fill a glaring need THIS season so those deals might not happen till the summer. Rondo, for example, could be acquired in a sign-and-trade of Bledsoe this summer if Boston really wants to lock in their future before waiting out Rondo's decision (expiring in 2015).

Unless Rajon Rondo returns to form and Jeff Green shows the world he's the best Green on the floor, the Celtics will have a hard time winning this game.

How much effort the Suns put out tonight will be interesting to watch. Last night, they were discombobulated and under-efforting most of the game until the end, and a back to back is always tough after an overtime win. However, this is the stretch run and every win counts so I hope Hornacek still has these guys listening.