The surging Phoenix Suns, winners of 11 of 16 games, face the mighty Borg-like San Antonio Spurs who appear to be able to beat any team with any lineup.

The Phoenix Suns have lost both prior games against the San Antonio Spurs, by three points in the first week of the season and then by 9 at home as one of only 3 losses in December.

Both games featured healthy sides, which is different this time around. The Suns are without Eric Bledsoe, and the Spurs are likely without at least Tony Parker.

The Suns are about to face a difficult second-half schedule, starting with the Spurs tonight in Phoenix.

The Opponent - "The Borg"

Those crazy Spurs are somehow able to beat any team with any lineup. On Wednesday night, they sat Tim Duncan, Kawhi Leonard and Tony Parker (variety of maladies) and still beat the Portland Trailblazers behind 29 points from Patty Mills (of course) and 20 from 3-point champ Belinelli (of course). The Blazers were missing Aldridge though, so that kind of evened the score, right?

The night before that, the Spurs beat a fairly healthy Los Angeles Clipper squad (missing only J.J. Redick) without Parker and Leonard.

Speaking of Tony Parker, he missed the last game before the All-Star break and has been declared out "for the foreseeable future" for a "variety of maladies" since the break. But he magically was okay for the All-Star game itself, by effect not allowing another injury substitution which could have been Goran Dragic.

The Borg is the Borg. They know their roles so well they can beat anyone with any lineup. Who knows who will play tonight against the Suns - just expect great execution. And if the Suns can't find a way to play better than they did against Denver and Boston this week, expect a loss to the Spurs.

Despite playing poorly, the Suns found a way to win their two winnable games this week - in Denver, and hosting Boston. Neither game was a big challenge, but for a young Suns team unaccustomed to being favored, that's a real plus and should be seen as a positive sign for the rest of the season.

You WANT to be able to win games even when you're not playing well. That's the Suns lately, who have now gone 11-5 in their last 16 games without Bledsoe after a 2-5 dip in the first 7 without him.

Check that again: 11-5 in their last 16 games without their second-best player. That's pretty good. 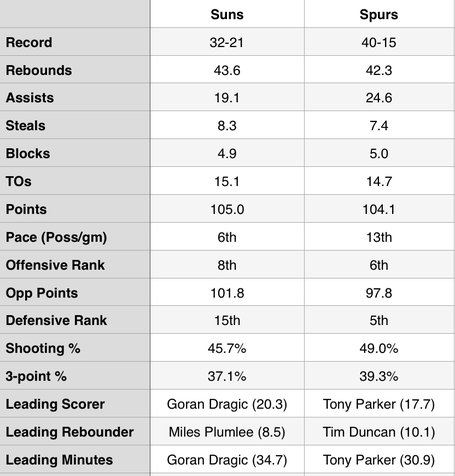 No one knows who the Spurs will play or sit until later in the day, and sometimes just before tip. With Duncan resting on Wednesday, I assume he will play tonight. Leonard is probably, so he might replace Green or Belinelli in the starting lineup.

Parker is out "for the foreseeable future", per the coach, with officially listed injury called "wrist sprain/body soreness". It's possible that Popovich couldn't see to Friday as of Tuesday, so it's anyone's guess whether Parker will play.

The Spurs' unknowns vs. the Suns' unknowns. Can Gerald Green, P.J. Tucker, Ish Smith and Miles Plumlee hold their own against Marco Belinelli, Patty Mills, Corey Joseph and Jeff Ayres?

We know the big names, and if they play they will play well. It's the other guys on the Spurs who can derail the Suns' hope for a win.

While Mike Lisboa predicts a loss (see the '29 to go' article this morning), I'm going to break the mold and predict a win.

I think the Suns will come out firing on their home court and ultimately scratch and claw to a win. And the Spurs will shrug and move on to the next game because they are the Spurs.