After splitting the first two games in Houston, the Phoenix Suns need to beat the visiting Rockets tonight maintain a tie-break advantage for playoff positioning.

Both the Phoenix Suns and Houston Rockets are on a roll.

The Phoenix Suns, winners of 12 of their last 17 games, face off against the Rockets who have won 16 of 21. Even more recently, the Suns have bagged three in a row while the Rockets have taken 8 of 9.

The Houston Rockets remain the league's poster child for taking the most efficient shots on the basketball court, with 86% of all of their shots being taken either in the paint or from behind the 3-point line. By doing this, the Rockets can overcome the fact that they shoot at or below league average from everywhere on the court but still have the league's 5th best offense in terms of points-per-possession.

*of note, the Rockets are only 25th in assists per game. With an offense built on your ball handlers being scorers (James Harden, Jeremy Lin), the assist rate goes down. 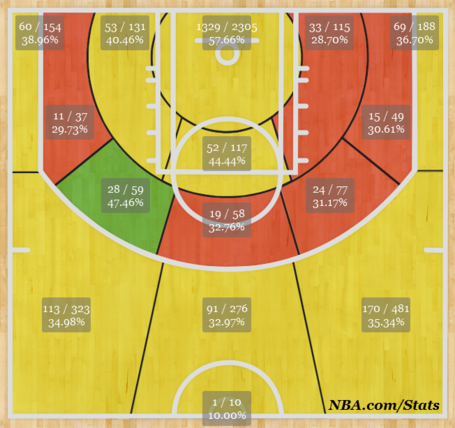 The zones in yellow indicate that the Rockets shoot comparably to the rest of the league in those areas, while the zones in red show they shoot below league average.

As you can see, unless you can shoot 50% or better on all of your midrange shots, it's better to take the higher value shots. Over the course of 100 shots, that's a 10-point swing in your favor if you can take higher-percentage shots over lower-percentage ones and it's why many NBA teams build their defense around rim protection and 3-shoot protection.

The Rockets are good at defending at the rim, thanks to Dwight Howard this year and Omer Asik last year, but are not so good at defending the 3-point line, allowing the league's 6th highest attempt rate from behind the arc.

The Phoenix Suns offense this season has mirrored the Rockets in many ways, but is a little more balanced. The Suns only take 71% of their shots at the rim or from behind the arc, with the remaining 29% being in the mid- to long-2 range.

While the 71% mark pales in comparison to Houston, the Suns offense is still one of the league's best (8th in overall efficiency) and ranks as the third-highest 3-point rate, according to basketball-reference.com. 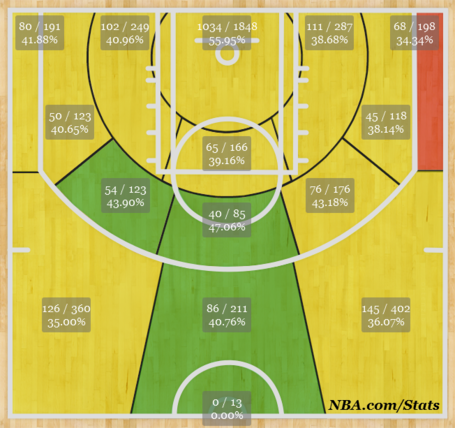 The only area the Suns shoot poorly is from the right corner, while from the left corner the Suns shoot it well. Marcus Morris and P.J. Tucker are the primary corner-3 shooters in the Suns' offense. 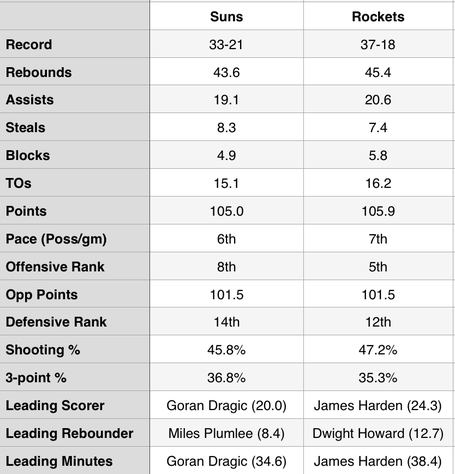 Patrick Beverly has been starting lately in place of Jeremy Lin, who provides scoring off the Rockets bench. Beverly brings much-needed on-ball defense into the starting lineup next to James Harden.

In this game, the key matchup is the Suns defense vs. the Rockets offense. The two prior games, both in Houston, could not have been much different for Houston despite playing the same lineup both times.

The Suns defense allows the league's fewest 3-point shots made and allows the second-lowest opponent 3-point shooting percentage when they are taken. The defense is designed to run teams off the line and, hopefully, make them shoot midrange jumpers. That's what makes Miles Plumlee so important. If he can stay out of foul trouble and defend the rim, the Suns have a good chance of winning any game.

While Dwight Howard might go nuts under the basket, the key for the Suns will be to continue to defend the 3-point line against the likes of Harden, Lin and Parsons.

*note: James Harden (hyperextended elbow in loss to GS) is questionable for this game

Playing at home and on national television (ESPN), expect the Suns to come out focused and strong. They are playing the entire year with a chip on their shoulder that no one gives them credit, and national TV games have been their showcase.

Add in the embarrassment of the recent blowout at the hands of the Rockets, I really expect the Suns to play the best they can tonight. That might not be enough, since the Rockets are so good and on such a roll, but I think the Suns do win this one in a high-scoring affair.