Take a look at my experience in New Orleans for All Star Weekend.

Bright Side of the Sun wants to thank the team at Crown Royal for a magnificent weekend in New Orleans for the 2014 All-Star Game. What a treat to be whiskeyed (we drank responsibly!) and dined like a VIP for the entire weekend.

Along the way, I met some great bloggers from around the country and even got a chance to meet a living legend: Dr. J himself, Mr. Julius Erving. 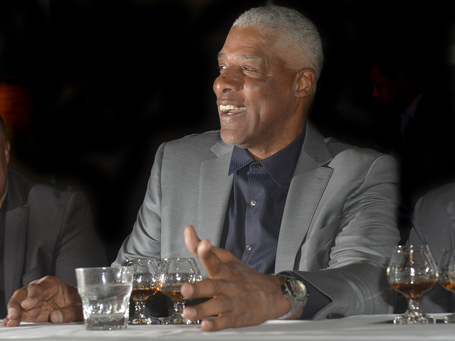 They put the tall people in the back (cover photo), so all you can see of me is my head above Dr. J's. But I didn't need to insist on a closer picture in the crowd since I got a selfie with the Dr. anyway. 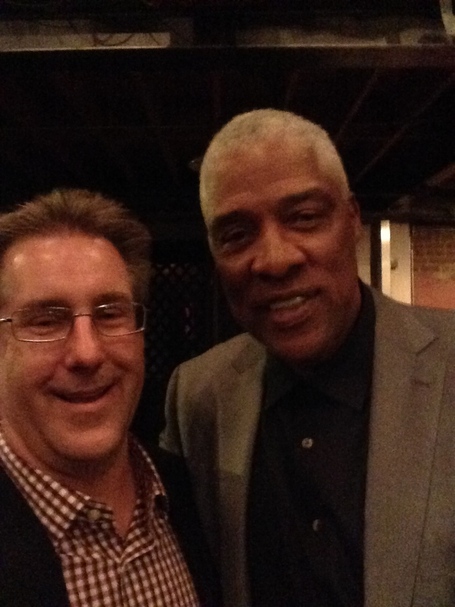 Not as crystal clear as the the group photo, but proof enough for me!

Erving was a great host who shared some thoughts about today's NBA, how he got his nickname and what he thinks of advanced stats.

Erving also helped us learn something about whiskey, but I have to admit after a few glasses I didn't remember (and couldn't tell) the difference between one and another (though I think I'm partial to the XO). 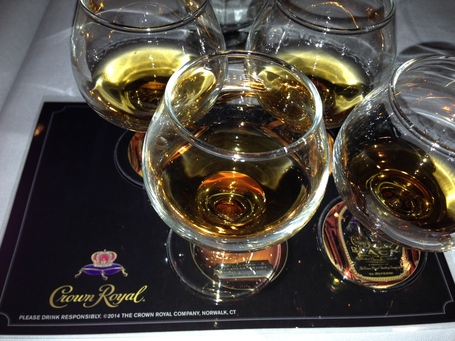 To show what a good sport Dr. J is, take a look at this 2012 clip of him taking 'Three Ridiculous Questions' from Jimmy Kimmel.

On Friday, we were invited as VIP guests to Kenny Smith's TNT All-Star party. I saw several retired ball players there, including the ever-dapper Grant Hill. The party was being held at the Metropolitan, a trendy bar in NOLA. 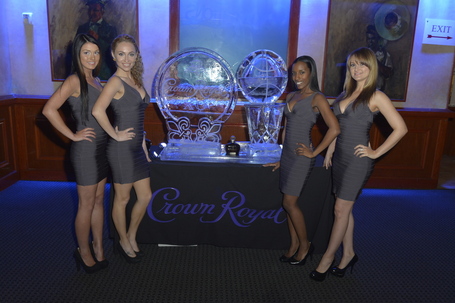 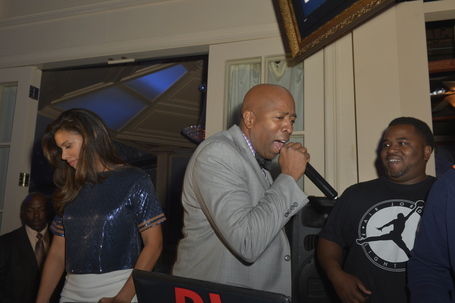 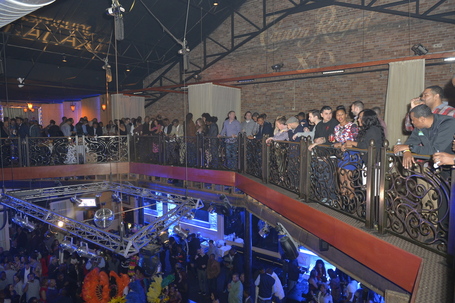 As the old guy in the group, I didn't make it as late as most did. This place was hopping!

As great as Friday was, Saturday was even better. I'll cover basketball later in this post, but for now let's stick with the party theme. Saturday was the early Dr. J. meeting, then a multi-course dinner with various Crown Royal cocktails, then back to the Metropolitan for comedian Kevin Hart's All-Star party. This time, I stayed out with everyone till nearly 4am (and paid for it on Sunday). 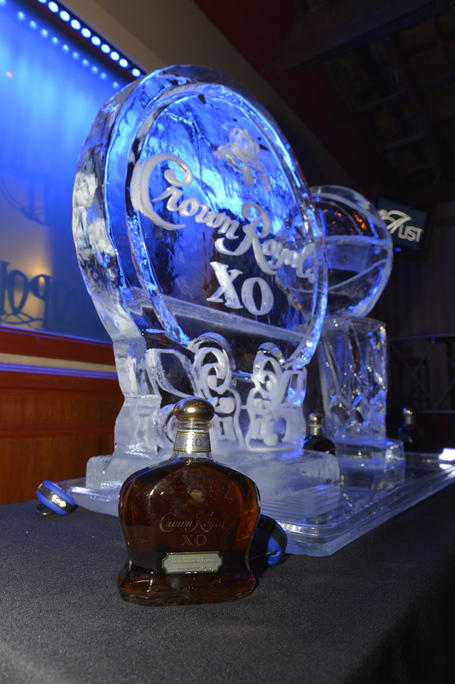 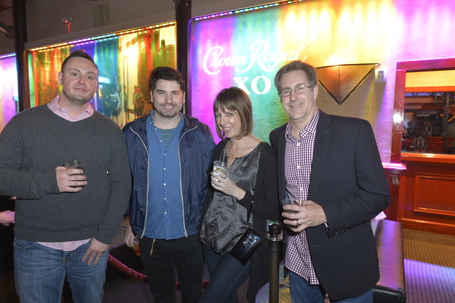 That's me on the right, along with three other SB Nation bloggers: Nate Timmons, Denver Stiffs; Tom Lorenzo, Nets Daily, and Rebecca Larson, Mavs Money Ball. Another SB Nation blogger who joined us but is not shown here is Jason Walker, PeachTree Hoops. (Jason is in the sport jacket and red shirt in the first Dr. J group photo above).

I had a great time with these fine folks drinking cocktails on the house all weekend. As you can tell, we were the envy of the whole bar.

Here's everyone at the bar mobbing Kevin Hart as he came in. Needless to say, we didn't get any close-ups with Kevin. 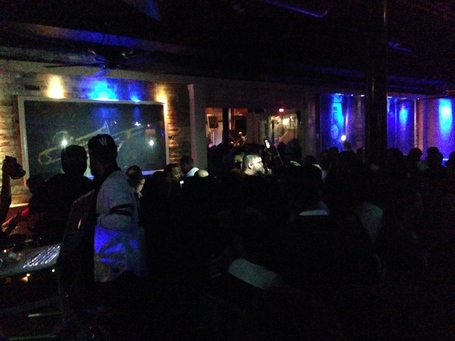 Sorry. That's the best I could do, folks. I believe that's him with his back to the camera against the far wall. LOL. It was a crush of humanity and too much tight leopard-skin for my taste. I realized at this point (well, much earlier I guess) I might not be Kevin Hart's target audience, at least at All-Star parties.

Now let's get back to basketball.

Between all the parties, I was able to partake a bit in the basketball side of All-Star weekend with a media pass to the NBA Jam Fest, which lots of games and interactive activities for kids (and kids at heart) but also included the D-League skills competitions and All-Star game. 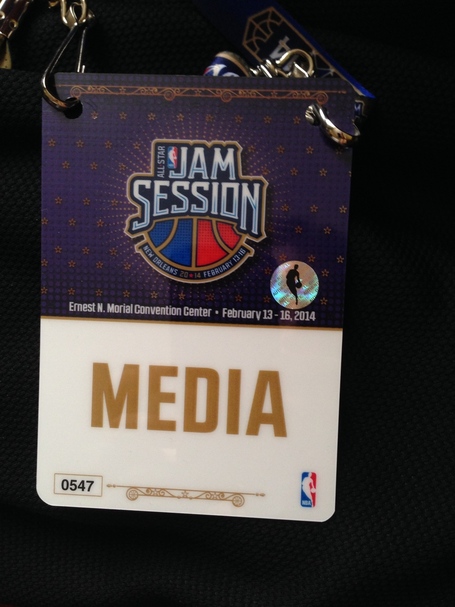 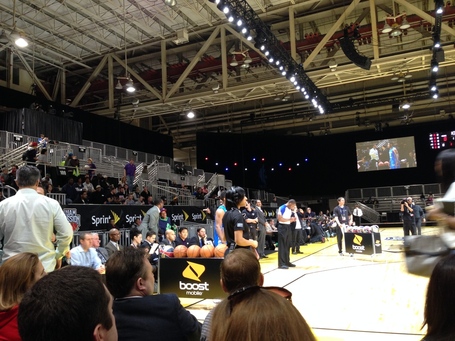 We got to see some of the best D-League players doing All-Star things:

Was good to see a couple of guys who tried out for the Suns in recent seasons - hope they get their shot soon enough. Onuaku just signed a 10-day deal with Cleveland this week. Supposedly, the Knicks are looking at signing Diogu this week as well.

Pierre Jackson was the marquee player at the event, scoring 33 points along with 10 assists, but has not gotten a call-up to the NBA and recently signed a deal overseas.

The basketball highlight of the weekend, besides meeting Dr. J., was the All-Star game. 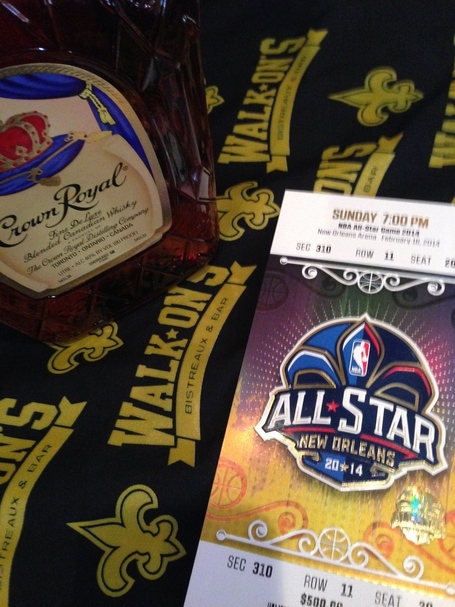 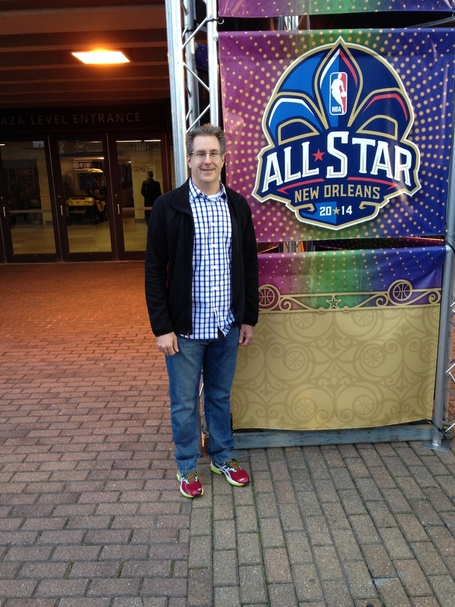 The pregame show, with Farrell and his all-star band of 40 year old rappers, was a rocking experience. Seemed like it was a concert where a basketball game broke out during intermissions. 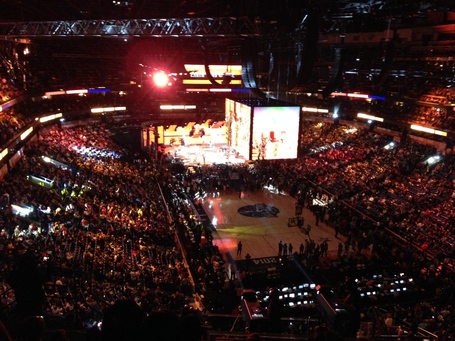 Sure, it's a total showcase where no one plays team ball and it's all about the biggest star-power plays, but I have to say the ASG was fun to see live - especially with the great NBA bloggers around me to enjoy it with.

I won't soon forget Jason Walker (Hawks blog, Peachtree Hoops) bringing up every possible connection to "The ATL" during the game, and throughout the weekend for that matter. He reminded Dr. J. on Saturday about the Doctor's short experience with the Atlanta Hawks. Erving laughed and said they should catch up sometime later to discuss in detail. I had no idea what Jason was talking about, so googled this. LOL. Dr. J. and Zelmo Beatty had a lot more in common than I ever guessed.

Anyway, it was a fun time despite not being able to see the Suns' very own Goran Dragic at all over the weekend. Being out with Crown Royal, we didn't get to attend the Skills Challenge, but I didn't end up missing much anyway.

"I didn't like [the format]," Dragic said afterward, with a laugh. "If you're doing well but somebody else is not doing well you're kind of screwed."

He wouldn't name who was not doing well, but didn't ascribe to the notion floated on twitter that his partner Jackson didn't even realize is was a team event. He said they talked beforehand about it.

The big thing was that, like me, Dragic spent a great deal of his weekend time away from the basketball court. Miles Plumlee had a similar experience to Goran in that his basketball portion was very brief while the media and community service schedule was heavy.

"In the off days, it was a lot of work," Dragic said afterward of his experience in town for the Skills Challenge. "Media, meeting new people, building benches for NBA Cares. It was fun, but I didn't have that much of a break."

Goran had planned to bring Maya and Mateo, but once Maya saw the schedule she said no way.

I am really grateful to the Crown Royal team for hosting me and the other bloggers this weekend the first ever Crown’s Center Court influencer program comprised of NBA specific team writers from across the nation.

The Crown team isn't done yet!

Coming soon are giveaways to you guys, including NBA.com gift cards and other quality prizes. Stay tuned for those giveaways in March and April.

For Crown Royal, to Reign On is to win, and we want you to Reign On responsibly this NBA season.