The Phoenix Suns try to start a new winning streak against the Minnesota Timberwolves tonight at US Airways Center. Both teams had their 3-game winning streak broken in their last game, and both want to get back on the winning side.

The last time these two teams played, Gerald Green capped an improbable comeback with a last-second jumper to help the Suns escape Minnesota with a win. The Suns overcame a 7-point deficit in the final 2:44 in that one, the only bright spot on a tough road trip right after losing Eric Bledsoe to injury.

Now, the Suns host the Wolves in Phoenix on Tuesday night. The Wolves have since lost Nikola Pekovic and Kevin Martin to injury, though Pekovic could be activated any day now. He will test his injured ankle before tipoff in Phoenix tonight.

After playing the red-hot Rockets on Sunday night, the Timberwolves are downright cold. Even before suffering injuries to two starters, Nikola Pekovic and Kevin Martin, the Wolves had managed to lose a lot of game they should have won and still remain 6 games out of a playoff spot.

It's getting a little late in the season to expect much to change in the big picture, but the Wolves still have all the firepower they need to lay the hammer on any team any night.

So how are they always under .500? Because they can't close out games and they they allow their opponent to shoot better than they do. The Wolves defensive philosophy is to allow the open shot in order to gobble up the rebound. In practice, they are 4th in defensive rebound % and commit the fewest shooting fouls, but they allow opponents to average 46.7% shooting, 28th in the league. You can just call that the opposite of the Suns defensive philosophy.

After coming out with 3 gutsy wins since the All-Star break, the Suns tripped fell against the Rockets while the Dallas Mavericks managed to hold to win against the hapless Knicks last night to strengthen their hold on the 7th spot in the Western playoffs.

With Memphis breathing down the Suns necks, every game is important here on our and there's 27 left. What a race to the finish!

The Suns, let's not forget, are playing short-handed just like the Wolves. The Suns have gone 14-11 without Bledsoe after a 16-8 record with him. The Suns were missing Bledsoe in the recent comeback win over Minny. 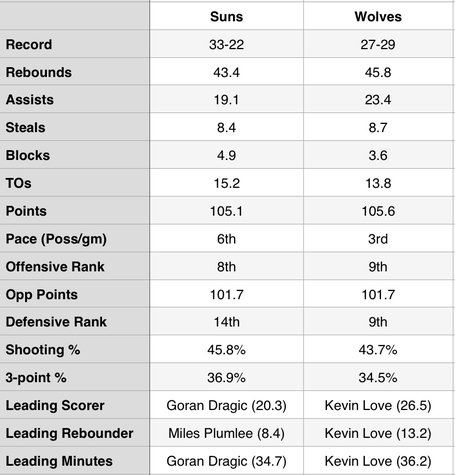 The obvious answer is All-Star Kevin Love vs. the Suns defense.

But actually, the most dangerous matchup is everyone ELSE besides Love. You can allow Kevin Love to get his 30 and 10, but you can't beat the Wolves if the rest of their guys have good games.

Suns killers Corey Brewer, Jose Juan Barea and Dante Cunningham have all been playing better recently. Picking up slack for Kevin Martin, Brewer has been posting 13.4 points and 3 rebounds per game over the past 10 games. Barea and Cunningham are putting in 20 points, 8 rebounds and 4.5 assists per game collectively (in 48 minutes). Chase Budinger has recently returned from injury and is shooting the 3 very well, and Rubio is averaging a double-double.

There's always the chance that the Wolves are dominant. They are truly a Jeckyl-and-Hyde team. When they win (27 times), it's by 17 points. When they lose (29 times), it's by 8 points. By contrast, the Suns average 10-point wins vs. 7-point losses.

But I think the Suns take this one. The Wolves are 9-21 against winning teams, while the Suns are 22-6 against teams below .500. Factor in the home court, and this should be a win.