Just five days ago, the Phoenix Suns seemed a lock for the playoffs. Three tough losses later, the Suns have to win to even stay in playoff position.

Share All sharing options for: Game Preview: New Orleans Pelicans at Phoenix Suns with lots on line for Suns

What a difference a few days makes. After two solid months of remaining in playoff position in the West, the Phoenix Suns only needed a week to put all that work on rocky ground.

The Phoenix Suns were playing well too, capped by a .600 record at 33-21 record after a pasting of the hated San Antonio Spurs at home last Friday (was it only last Friday this happened? It seems so long ago.), the next six of seven at home, and the impending return of Dragic's back court mate Eric Bledsoe for the playoff push.

The good times continued into the waning minutes of Sunday night's game against Houston, but then the wheels came off. The Suns lost at 11-point fourth quarter lead to Houston, then an 8-point fourth quarter lead to Minnesota, then got pasted by Utah. The last two losses were punctuated (a painful puncture) by Goran Dragic's twisted ankle that might linger into the upcoming games.

Now, with the Pelicans coming into town, the Suns need to win to keep hold of their 8th spot in the playoff chase.

The NOPs were supposed to be this year's Suns. After two post-Paul years of losing/tanking to high lotto picks, including budding superstar Anthony Davis, the New Orleans Pelicans spent money this summer to reach the playoffs and reap their just rewards for such self-imposed hardships.

First, they traded two #1 picks for a young All-Star point guard. Good in theory, for sure. Jrue Holiday is a quality young player, though maybe overpaid at $10+ per year. But then they swapped their incumbent PG for combo guard/small forward Tyreke Evans. Adding those guys to max-paid combo guard Eric Gordon proved to be a bad mix.

But all might have worked out for the Pellies if they'd gotten their front court right. Unfortunately, Ryan Anderson (their version of Channing Frye) got hurt and ruined the tenuous mix. Then Holiday got hurt. Then backup center Jason Smith.

To top all that off, the Pellies managed to horrify most of the kids with a new mascot that had to be replaced midseason with a softer version.

Later, an even scarier thing happened. What are they thinking in New Orleans?!?

Now the NOPs are fading back to their same position as a year ago, and may quickly decide it's better to be bad. Their top pick in the best draft in a decade is only protected to #5 and the Pellies are currently in the 8th lotto spot. But with their third best player lately being Brian Roberts, they may hit that fifth lotto spot after all.

Unfortunately, the Pellies have not been able to find that winning formula, with or without their health. They struggled to reach .500 when healthy, and now are careening with 5 straight losses and 7 losses in their last 8 games.

Ah, the Suns. I already went into a lot up above, so now let's go into the Bright Side: 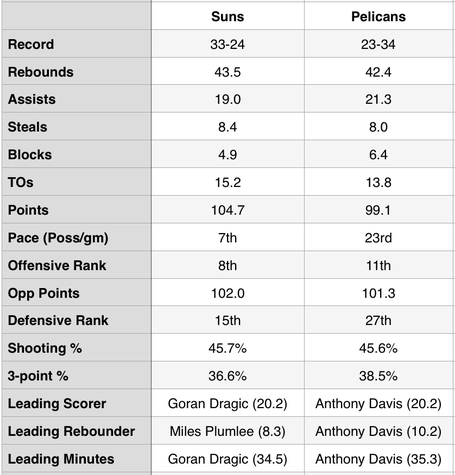 The big key to the game is getting Goran Dragic on the floor effectively. If Dragic can be effective, the Suns should be able to take this win easily. The Pelicans are floundering.

Statistically, there are a few important keys:

There's all kinds of ways this game could go wrong.

Eric Gordon could decide that he wants to show the Suns what they almost had (which would have to be better than 15.8 points, 3.1 assists, 2.6 rebounds version in NOP land).

Anthony Davis could go for 30/15 and carry the team to a win.

But most likely, as long as Goran Dragic plays, the Suns will be able to pull this game out. The Suns beat the Pelicans both prior times this season, in November. Once in Phoenix, and once in New Orleans (when Bledsoe carried the Suns to a win with Dragic out).