The streaking Phoenix Suns host the once-streaking Chicago Bulls on NBATV in a matchup of teams making lemonade out of lemons after losing their regular point guard early in the season.

Since winning their first post-Deng game over the Phoenix Suns in Chicago, the Bulls won 9 of 13 games before dropping their last two on this road trip to the Pelicans and the Kings.

The Bulls are what they are: defense first, offense only because they have to, and pace be damned. But that's worked for Tom Thibodeau's team since he left Boston several years ago.

Since winning their first post-Deng game over the Phoenix Suns in Chicago, the Bulls won 9 of 13 games before dropping their last two on this road trip to the Pelicans and the Kings.

Without former MVP Derrick Rose or All-Star Luol Deng, the Bulls cobbled together a strong stretch of play behind their proud defense-oriented studs in Joakim Noah, Taj Gibson and Jimmy Butler.

A sure sign of how a defensive scheme can make any player look good, the Bulls somehow have the league's second-best defense despite giving big minutes to Mike Dunleavy, Carlos Boozer and undersized D.J. Augustin. That says a lot about coach Thibodeau's schemes and Noah/Gibson/Butler defensive chops.

Fifth year point guard D.J. Augustin has enjoyed one of the best stretches of play in his career, putting up 20 points and 6 assists a game over the 10 games before Monday night's loss to the Sacramento Kings.

Rookie Tony Snell has gotten a lot of run as the team's third best 3-point shooter behind Augustin and Dunleavy.

While the Suns have won 8 of 10, including their last five straight, the offense has been awesome - ranking second in the league over the past 10 games in points-per-possession.

But the defense has taken a hit. Partially, that's because many of these 10 games have been blowouts leading to ragtag 4th quarters where the opponents backups rack up points to cut the lead from 20 to 10.

But overall, that's a symptom of the Suns of old coming back. The better the offense, the less you have to worry about getting stops on defense. The Suns focus on the defensive end wanes as the game goes on and the lead extends. This is great while you're actually getting the lead, but could be a bad habit hard to break once the opponents get better and the leads are more tenuous (if there at all). 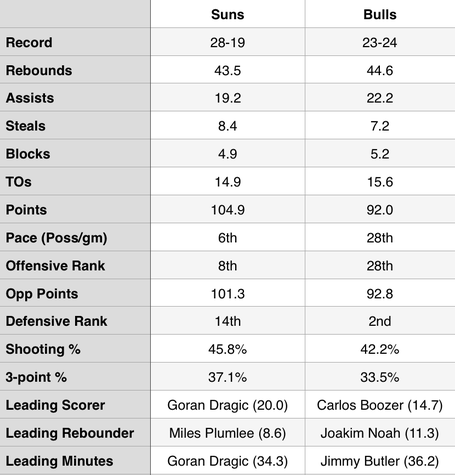 Since losing leading scorer Derrick Rose and second-leading scorer Luol Deng, the Bulls are left the Boozer, Augustin and Dunleavy for offense. Yes, they're 28th in the league.

Chicago represents the kind of team that's given the Suns fits all season: defense oriented, slow pace and great with rebounding. Let's see how the Suns respond.

The key matchup in this game will be the Bulls' bigs Noah, Boozer and Taj Gibson against the Suns' bigs Plumlee, Channing Frye and Markieff Morris. The Suns need every one of their guys to play big and strong. If they can keep it close on the glass and reduce the Bulls' second chance points, the Suns can win the rest of the matchups.

In the last matchup, leading rebounder Boozer didn't even play while Noah and Gibson combined for 6 more rebounds (26) than Frye, Plumlee and Morris pulled down together (20) as the Suns were outrebounded 50-41 overall.

Another interesting matchup is a walk down memory lane: D.J. Augustin was taken 9th as the third-best point guard in the 2008 draft where Goran Dragic was taken 45th. While Derrick Rose and Russell Westbrook have proven their lofty draft status, no other PG has produced as much as Dragic. Augustin has bounced from team to team since his rookie deal expired after 4 years in Charlotte.

Augustin put up 13 points and 9 assists in the last matchup in Chicago, vs. Dragic's 21 points and 2 assists.

I do believe the Suns win this one. They are so confident right now, and playing at home always helps the shot drop a bit better. The Suns will need to make shots but more than anything they need to fight on the glass.

This game is on NBATV, much closer to "national" than a regular game. While NBATV is not on as many cable packages as ESPN or TNT, it's more accessible than league pass for many.

Here's hoping the Suns show the nation why they are one of the league's best teams tonight, and Dragic shows why he's an All-Star.