Phoenix Suns try to break two-game losing streak against the tough Golden State Warriors, who might have to play the game without both David Lee and Andrew Bogut.

The Phoenix Suns have had a Jekyl and Hyde relationship with the Golden State Warriors this season. An early season win over GS at home was one of the first indicators that this Suns team was a potential playoff contender. Then the Warriors handed the Suns a 25-point loss just a couple of weeks later.

The difference between the two games? Andre Iguodala, for one. With a #fullsquad including Andre Iguodala in game two, the Warriors blasted the Suns with an array of offense and defense that left the Suns beaten so badly they could only shrug it off.

With their last win, coupled by the Suns 2-game losing streak, the Warriors have retaken the 6th spot in the Western Conference standings.

Early in the season, the Warrior fanbase developed a hashtag (#fullsquad) to use injuries as an excuse for why the Warriors weren't undefeated or close to it. But since Iguodala returned to the lineup to make the full primary rotation whole, the Warriors have not set the world on fire.

Their defense is stellar (3rd overall), but their offense is struggling (11th). Surprised? Me too. With offensive-minded players like Curry, Thompson and Lee in the starting lineup, you'd think those stats would be switched. But having a great defensive center (Bogut) and a great defensive wing (Iguodala) has made the Warriors a stout defensive squad. Unfortunately, Bogut and Iguodala leave a lot to be desired on offense.

According to reports, starting power forward David Lee is questionable for the Suns game, while Andrew Bogut is probable.

Who knows what Warrior teams we will see tonight. Two games ago, they scored only 75 points in a 16-point home loss to the Bobcats. But then they followed that up with a 15-point win over Chicago. Both Bogut and Lee missed that win over the Bulls (who you remember beat the Suns on Tuesday night) as Curry and Thompson carried the Ws offense to victory.

You might notice a certain headband wearing center on the Warriors tonight - last year's Suns starter Jermaine O'Neal. O'Neal had what many thought was a season-ending injury earlier in the year, but has returned and helped the Warriors beat the Bulls.

The team got simultaneously 3-point happy (58 attempts the last two games) and 3-point poor (only 16 makes in those 58 attempts) as they tried to fight back from deficits by jacking up more and more threes.

The Suns are better when their offense is more balanced inside and out, so look for the Suns to attack the rim more despite the likelihood that defensive stalwart Bogut will be in there to deter opponents at the rim.

Gerald Green and Channing Frye will have to hit their shots, though, if the Suns are going to pull this one out. 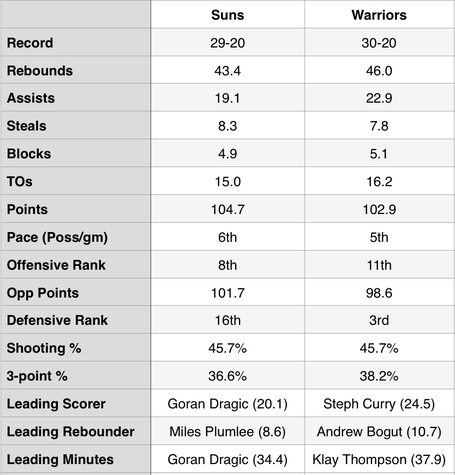 The Warriors are the far superior defensive team, while the Suns have the edge on offense. Yep, I am surprised too.

The Suns, of course, are not #fullsquad either, still missing Eric Bledsoe to the knee injury.

The Suns can withstand Steph Curry going off on them for 40 points. What they cannot withstand is Klay Thompson getting 30 of his own on spot-ups and curls.

The key to this game, other than the Suns making shots, is to hold Klay Thompson under his season average of 18.6 points. With Lee likely out, Thompson will get more offensive touches than usual, so it's vitally important to keep him from going off.

Alternately, you can't let Iguodala get 30 of his own. He's been known to make shots against the Suns that he doesn't normally make. The Suns defensive wing rotation will have to be on the ball against these guys.

The Warriors are more talented on the top end, but the Suns are a deeper team with the Morris twins coming off the bench.