The Phoenix Suns are now tied with the surging Memphis Grizzlies for 8th place in the Western Conference, but are behind them by dint of tiebreakers. That doesn't make this game against the Los Angeles Clippers a must-win, but it certainly feels like it.

Share All sharing options for: Phoenix Suns (36-26) on Outside Looking in Versus the Los Angeles Clippers (44-20)

No rest for the weary as the Phoenix Suns take their talents to Los Angeles a mere 24 hours after losing a tough one to the Golden State Warriors in Oakland, 113-107. Phoenix was in the driver's seat against the Dubs until a third quarter catastrophe sent them careening off the road to victory and into 9th place in the west. The Phoenix Suns are now tied with the surging Memphis Grizzlies for 8th place in the Western Conference, but are behind them by dint of tiebreakers. That doesn't make this game against the Los Angeles Clippers a must-win, but it certainly feels like it.

Barring a big surprise, Eric Bledsoe is still one day away from making his sure to be triumphant return. Without him, the Suns have demonstrated they are capable of playing elite basketball, but not night-in and night-out. This is unfortunate as they face yet another top flight Western Conference team on the second night of a back-to-back.

Hey, didn't we just play these guys? A week ago, the Los Angeles Clippers defeated the Suns behind - oh dear, I hope this isn't a trend - a tremendous third quarter surge in which they outscored Phoenix 37-18. Games ebb and flow, but Phoenix needs to contain these 20-point collapses after halftime if they want to remain in the playoff picture. Of course, Los Angeles needed an almost perfect game from Matt Barnes who scored 28 points (19 above his season average) and was simply unconscious in the 3rd quarter where he scored 18 of those points.

However, as Suns' fans are well aware, if you live by the Barnes, you die by the Barnes. And he will continue to figure prominently for Los Angeles with both J.J. Redick and Jared Dudley sidelined with back injuries. Despite that, it's still all about the big three: Chris Paul, Blake Griffin and DeAndre Jordan. Griffin is on the verge of collecting his 3000th rebound (he's at 2997) which would make him the 3rd player in NBA history to notch 6,000 points, 3,000 rebounds and 1,000 assists while averaging over 50% shooting before the end of his 4th season. The other two players? Kareem Abdul-Jabbar and Charles Barkley.

Unlike the Suns, the Clippers have won 7 in a row going into tonight's game versus the Suns. However, like the Suns every game is important to their playoff seeding. LA is only 3 games out of first place in the West and is currently in 4th place. Every game they win could be another round of the playoffs played at Staples Center. And homecourt advantage could play a crucial role in their quest to de-throne the Lakers as Hollywood's basketball royalty. We can expect them to have every intention of making tonight their 8th win in a row.

The Suns' purple road unis should go nicely with the orange life vests they've been sporting. Phoenix continues to tread water, going 5-5 in their last 10 games, and their legs must be getting tired. Gerald Green played 42 minutes and Goran Dragić 37 in last night's loss to Golden State. They'll need every bit of energy they can muster to keep up with the Clippers, the 6th fastest team in the NBA.

Phoenix would like to find some offensive mojo against the Clippers this time out. In the last meeting, P.J. Tucker lead the Suns in scoring with 18 points. We all love P.J., but if he's the main source of the Suns' offense, that's rarely a good thing. The silver lining to that cloud is that it's unlikely for the rest of the starters to repeat their dreadful 34% shooting performance. Goran Dragić, Gerald Green or a mystery champion will need to step up if the Suns have any hope of hanging with the Clippers.

Offense isn't the only struggle for Phoenix. The Suns are playing historically bad defense. Per Paul Coro, these past 6 games are the first time since 1986 that Phoenix has allowed 6 consecutive opponents to shoot 50% or more from the field. At 107.8 points per game (1st in the NBA) and 47.8% shooting (5th in the NBA), the Clippers' offense doesn't need any more help putting the ball in the bucket from a porous D. 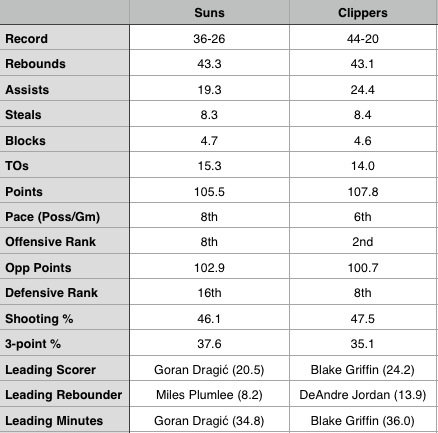 Miles Plumlee came off the bench for Phoenix last night for the first time this season as he recuperates from a knee injury. Eric Bledsoe is not expected to play tonight nor is Leandro Barbosa, though in his post-game coverage, Paul Coro also reported that Jeff Hornacek has said "It's up to [Bledsoe]" when he returns, though Wednesday versus Cleveland remains the target date.

The Clippers seem to have caught some of their Staples Center co-tenant's injury bug. While J.J. Redick is out (back), Jamal Crawford is day to day with a calf injury and Jared Dudley is a game-time decision after leaving the last match-up with Phoenix on March 4 with back spasms.

The Suns struggling defense versus the Clippers raging offense - Phoenix has gotten away with outscoring the Atlanta Hawks and Oklahoma City Thunder in recent victories. That method simply won't work against the most potent offense in the NBA. This would be the perfect game for defensive whiz Mike Longabardi and the Suns to rediscover their stingy early season form.

Beyond that, there are a raft of fun individual match-ups. Goran Dragić and Chris Paul checking one another should bring out the best in both point guards. Gerald Green should get the best of Darren Collison, and god willing, P.J. Tucker should outduel or at least match Matt Barnes. With the 1-3 positions fairly evenly matched, it could be a battle of the bigs to determine the outcome of this one. Phoenix is sure to give Blake Griffin several different looks defensively, but DeAndre Jordan could be the wild card if Plumlee's minutes continue to be limited and foul-prone rookie Alex Len gets the lion's share of the minutes at center.

This is a tough draw the night after a heated road battle with the Warriors. Given the minutes Phoenix's starters played in Oakland last night and their defensive struggles, all signs point to a Clippers victory, probably something similar to their last match-up, but higher scoring. I'll call it 112-107, Los Angeles, but as always, I hope I'm wrong.