The Phoenix Suns have already beat the Los Angeles Clippers once in their own house at Staples Center. Can they do it again?

Lineup Update: Sorry, no Eric Bledsoe. But Miles Plumlee will resume his role as starting center per Paul Coro. Doc Rivers has announced that the Clippers will indeed be without Jared Dudley (back), Jamal Crawford (calf) and J.J. Redick (back). So expect copious amounts of Matt Barnes tonight. Hopefully minus whatever psychic bond he shared with the ball and hoop the last time he played the Suns.

Eric Bledsoe will not play in #SunsAtClippers tonight but is expected to return Wednesday vs. Cleveland. Miles Plumlee will start tonight.

Doc says Jared Dudley (back), Jamal Crawford (calf) and JJ Redick (back) are all out vs Suns.

And here's a fun graphic comparing Blake Griffin and Gerald Green, care of the the Phoenix Suns Twitter feed: 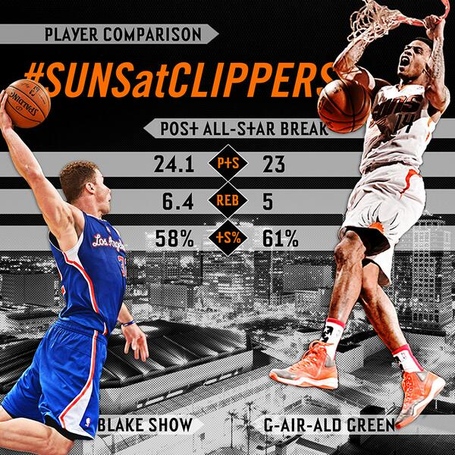