The Phoenix Suns really need a win to stay within shouting distance of the playoffs, and they return their second best player tonight in Eric Bledsoe from a nearly three-month injury.

Share All sharing options for: Game Preview: Cleveland Cavaliers (24-40) at Phoenix Suns (36-27) - Return of the future

Ah, the crazy way the NBA season progresses. Welcome to the playoff chase.

Seven days ago, the Phoenix Suns were on the verge of dropping from a playoff seed if they'd lost to league-best Oklahoma City. But the Suns beat OKC while the Grizzlies and Mavericks lost to bump the Suns back to 7th in the race. Yet, six days later the Suns have dropped to 9th thanks to back-to-back losses coupled with wins by their competition.

As fast as they can drop, the Suns can jump right back into contention with some wins against the East in the coming weeks. While most of the games are on the road, the Suns do play 9 of their next 10 against Eastern Conference foes not named Indiana or Miami. The games are winnable, so coming out with a winning record over the next 10 games is imperative if the Suns hope to make the playoffs.

The return of Eric Bledsoe should help. The Suns are 12-6 with him and Goran Dragic starting and finishing the same game. They are 16-8 overall with Bledsoe in the lineup. Without Bledsoe, the Suns are only 20-19 on the season. Bledsoe helps on both offense and defense, and could be the deciding factor of the Suns playoff push.

After winning 6 straight games in February to give their fans some hope of making the playoffs in the terrible Eastern Conference, the Cleveland Cavaliers have now lost 7 of 9 and sit at 24-40 despite adding Luol Deng and Spencer Hawes without giving up any of their young talent in the process.

It's quite possible that Mike Brown just isn't the right coach for this team. They are one of the league's youngest, yet play at a slow-ish pace (21st). They added a strong veteran in Luol Deng and their coach is a defensive-minded tactician, yet they deploy one of the league's worst defenses (20th overall).

The Cavs have a strong starting lineup, but they just have not meshed well this season. Let's hope that failure to launch continues at least one more game.

Well, a look at the Bright Side says "at least they didn't go 0-4 in that tough stretch". Given that the Suns are displaying the WORST defense in the entire league over the past 7 games, it's amazing they have even been close at all.

The Matadors have allowed a league-worst 115.4 points per 100 possessions over the last 7, including the opponent hitting better than 50% of their shots in each and every one of those games (average = league worst 53.1% allowed). Prior to that 7-game stretch, the Suns had allowed the 9th lowest opponent field goal percentage (45.4%).

The Suns used to be a top-5 defense in opponent three-point field goal % (allowing just a 33% conversion rate), but the last 7 games have seen the Suns allow better than the 41% they allowed a year ago as the worst in the league (41.7% allowed in 7 games is 4th worst in the league over that stretch).

So how have the Suns even sniffed at a 3-4 record in that 7 games? By playing the league's 3rd best offense (112.9 points per 100 possessions) and somehow being 6th in rebounding over that stretch of 7 games (52.9% of all rebounds). The Suns are rebounding the available misses better than usual, they just can't stop the initial shot any more. 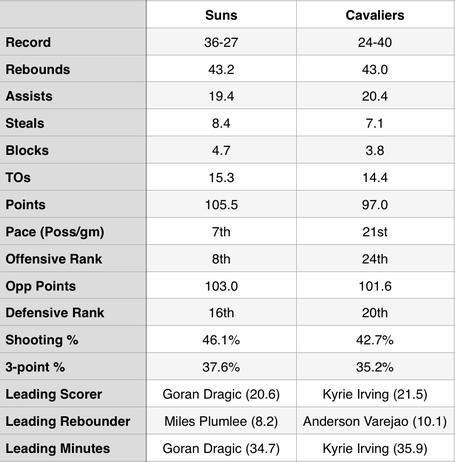 With P.J. Tucker suspended and Suns coach Hornacek previously saying he'd bring Bledsoe off the bench for at least a game or two, my guess is that Marcus Morris gets his first start of the year tonight for the Suns. Plumlee returned from injury and started last game (12 points, 9 rebounds), so expect the usual lineup with the exception of Mook.

It's the RETURN OF ERIC BLEDSOE tonight, so of course the key matchup will be Kyrie Irving against the Suns Slash Brothers of Goran Dragic and Eric Bledsoe.

We might even see some Slash Brothers against the PG duo of Irving and Jarrett in a battle of the two-PG lineups. Ish Smith will rotate in as well.

The Suns really need this win, and the Cavaliers might just be the right foil at the right time.