Back to the Future: Phoenix Suns to start Bledsoe and Dragic for first time in 2014

After 64 games, it is obvious that the Phoenix Suns need to be perfectly healthy to be a winning basketball team. On Friday night against the Celtics, the Suns will be healthy for the first time since December 30.

Share All sharing options for: Back to the Future: Phoenix Suns to start Bledsoe and Dragic for first time in 2014

Earlier today, azcentral.com's beat reporter Paul Coro reported what many of us expected to happen.

The Suns most productive starting lineup will be together for the opening tip for the first time since a December 30 romping of the Los Angeles Clippers. In that game, Eric Bledsoe's meniscus tore in his knee, sidelining him for 10 weeks.

At that point, the Suns starting five of Goran Dragic, Eric Bledsoe, P.J. Tucker, Channing Frye and Miles Plumlee won 12 of 16 games in which no one got hurt. Twice, Dragic left a game in the 4th due to injury and the Suns lost.

Let's take a closer look how they got to 12-4 together. 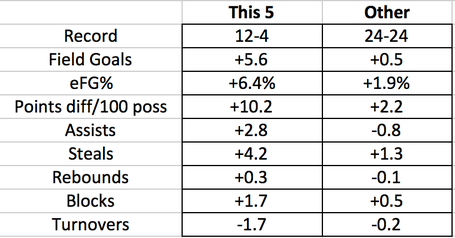 This 5-man group has still played the second-most minutes on the team despite Bledsoe's injury. The only lineup that has played more minutes as a unit is the other primary starting lineup that swaps in Green for Bledsoe. That lineup is a net positive for the Suns, but not nearly to the degree of the Bledsoe/Dragic lineup.

Otherwise, the Suns are just a slightly above average team with a 24-24 record (3 of those losses saw Dragic leave the game in the 4th quarter with a lead, only to lose the game without him) and a net +2.2 points scored per 100 possessions.

The 12-4 lineup that's starting tonight's game, and hopefully the rest of the season, put up some quality wins.

The Suns beat the Portland Trail Blazers, Golden State Warriors, Houston Rockets, Denver Nuggets, Toronto Raptors and Dallas Mavericks in that stretch, while losing to only the Nets, Grizzlies, Spurs and Warriors. That's a 6-5 record against current playoff teams, but the best news is that the Suns went 6-0 against losing teams*.

*The Nets were a losing team at the time, so you could call it 6-1 if you want

**data per nba.com, with the Bledsoe/Dragic record factored out of the totals

Despite getting the boost that is Bledsoe back, the ironman of the team is hurting.

"Oh yes," Suns PG Goran Dragic replied when asked if this was the most banged up he's been at this point in the season. "Just bruises though. Nothing major."

"Maybe if Bledsoe hadn't gotten hurt," he said wistfully of the banging he's taken over the past couple of months.

The last time Bledsoe returned from injury (he missed 6 games for a shin bruise in November), the Suns lost to the struggling Grizzlies but then won 5 straight and 10 of 12 before Bledsoe went down again.

On Wednesday is his return, the Suns lost to the Cavaliers despite Bledsoe putting up 15 points, 9 assists, 3 rebounds and 2 steals in 33 minutes of action. But the Suns were missing P.J. Tucker due to suspension.

Hopefully, the Suns lost their obligatory first-game-back and will now go on a much-needed winning streak with their preferred starting lineup.