What: Phoenix Suns vs. Toronto Raptors

Where: Air Canada Center - Toronto, ON

Set your alarms, Arizona and West Coast Suns fans!  The Phoenix Suns (37-28) will make like the real sun and rise and shine for an early morning tip-off against the Toronto Raptors (37-27) on Sunday morning.  I can't find the statistics to back it up, but I can't help but think the 1:00PM local time tip-off bolsters an already significant homecourt advantage for the Raps.  As they say in neighboring Quebec, "C'est la vie!"

Toronto currently sports the third best record in the Eastern Conference and is a sturdy 20-12 at home.  They are even a respectable 14-12 versus Western Conference opponents.  The Raptors owe some of their seeding to some tremendous underperforming by the Chicago Bulls (due to injuries) and Brooklyn Nets (due to systemic underperformance).  Nevertheless, they have earned their wins via a calculated and efficient offense and stout defense.

There are a lot of similarities between these two ball clubs.  Like Phoenix, Toronto learned the benefits of addition by subtraction, sending Rudy Gay, Aaron Gray and Quincy Acy to the Sacramento Kings for John Salmons, Greivis Vasquez, Patrick Patterson and Chuck Hayes (most of whom form the core of Toronto's bench unit).  Along with Phoenix coach Jeff Hornacek, Toronto coach Dwane Casey was tapped for Eastern Conference Coach of the Month in December.  Similarly, this is a young athletic team led by a dynamic guard duo in DeMar DeRozan and Kyle Lowry. Continuing the likenesses, Toronto loves the 3-ball, garnering 25.2% of their total points scored behind the arc, vs. 26.5% for the Suns.

Unlike Phoenix, these Raps don't run.  At 23rd in the NBA in pace, they are the kind of slow deliberate team that have given the Suns fits all season long.  Combine that pace with the 6th ranked defensive rating in the NBA and this is a tough match-up for a Phoenix team that's struggled in the half court all season long.  Playing the role of wild card for the Raptors is second-year forward Terrence Ross.  Ross averages 10.7 points per game, but is capable of going off, notching a 51-point game earlier this season.  With a strong bench comprised mostly of solid veterans, ALL of the Suns will have to come ready to play for Phoenix to get out of Canada with a win.

Phoenix has clearly been struggling lately.  The defensive intensity has dropped from earlier in the season and as Dave King pointed out, there are cracks showing in the team's confidence.  Perhaps after 60+ games, this team is no longer "stupid enough" to just think they can win.

All is not lost by a damn sight, however.  Phoenix just snapped a 3-game losing streak by gutting one out versus the Boston Celtics.  Eric Bledsoe is looking as athletic as ever in his two games back from injury.  Goran Dragić is playing as good or better than all but a handful of players in the NBA every single night.  P.J. Tucker and Miles Plumlee are double-double threats every time they take the floor.  Markieff Morris continues to make his case for Sixth Man of the Year consideration.  And coach Jeff Hornacek continues to inspire confidence in players and fans alike.

Your Phoenix wildcards for the game: Channing Frye and Gerald Green.  When one or both of those guys are hitting on offense, the Suns are nearly unbeatable.  When, they combine for a gnarly 3-18 from the field as they did against Boston... well, you get a team that struggles to score 90 points despite a season average of nearly 105 points per game.  Both players have struggled lately after having near career years from behind the 3-point line.  Toronto could be the cure for what ails them: despite that #6 defensive rating, Toronto allows the 10th highest 3-point percentage to opponents in the NBA. 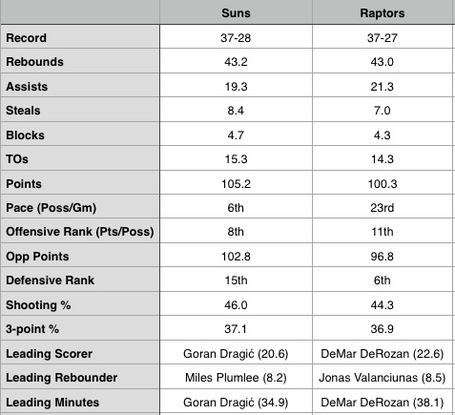 Battle of Wills - These teams are evenly matched.  This game will go to whoever wants win number 38 the most.  The answers to the following questions will loom large in the outcome. Will Phoenix be able to get out and run or will Toronto manage to slow things down to the glacial pace they prefer?  Can the Suns manage a strong defensive showing for a second straight game?  Can Dragić and Bledsoe outplay DeRozan and Lowry?  Will Frye and/or Green take advantage of the one weak link in Toronto's defensive prowess?

Toronto is playing to maintain home court advantage in the first and/or second round of the playoffs.  Phoenix is playing for their playoff lives.  The question of who wants it more shouldn't be a question at all.  As much as I think the matinee tip-off is a handicap for Phoenix (and could lead to a dreaded slow start), I think the Suns find a way to translate that desire into a close win over Toronto.  103-100, Phoenix.